Multiple rounds of severe storms to close out 2021

Daily record highs will continue to fall in cities throughout the South and Southeast as the warmest December on record comes to an unusually warm close for many.

Less than three weeks after a historic tornado outbreak devastated portions of the central and southern United States, more rounds of severe weather, that includes the risk of tornadoes, will target parts of the regions during the final days of 2021 and the start of 2022.

Barely 24 hours after a storm brought heavy snow to part of the Midwest, the first of two new storms swung across the Plains and into the Mississippi Valley into Wednesday night. The storm will create an overabundance of warm, moist air from northern Louisiana to southern Kentucky, which will serve as a perfect environment for thunderstorms to erupt and become severe.

A brief possible tornado was reported in Bainbridge, Georgia, Wednesday, just after 3 p.m., local time. Images shared with local officials showed damage to a roof, signs and trees, but no injuries were reported.

Later in the evening, damage from strong winds was reported in Winfield, Alabama, with Channel 1 Atlanta reporting instances of people trapped in cars downtown as well as eight people trapped inside a Pizza Bar. The National Weather Service noted that the damage could have been from a tornado. There were no reported injuries.

This latest threat of potential severe weather comes just over two weeks after a prolific tornado outbreak left entire towns in ruins and at least 92 people dead, according to The Associated Press.

The outbreak, which occurred on Dec. 10 and Dec. 11, produced at least 66 confirmed tornadoes. According to AccuWeather Founder and CEO Dr. Joel N. Myers, the tornadoes are expected to cost about $18 billion in total damage and economic loss. 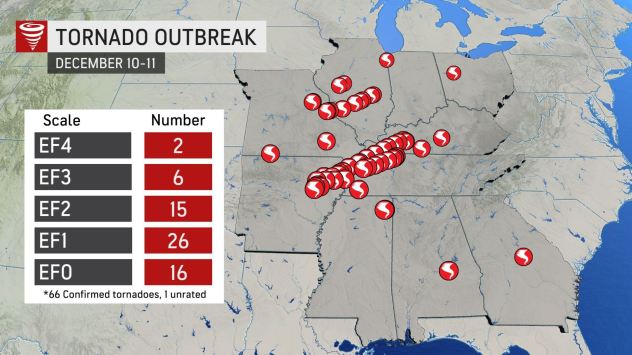 Cleanup efforts are still underway, especially in places like Mayfield, Kentucky, where damage was extensive. In locations impacted by the strongest of the tornadoes, entire homes were blown off foundations, buildings crumbled and infrastructure was turned to rubble.

While the strongest storms at midweek remained south of the hardest-hit areas, any rain or wind is enough to hinder cleanup efforts for a time.

After a relatively quiet Thursday, a larger and even more powerful storm will swing out of the Western states and slice northeastward over the central U.S. by this weekend. This second round may include much of the area hit in early December.

Storms are likely to hold off during most of the daylight hours on Friday. However, during Friday evening, the thunderstorms are forecast to erupt and rapidly turn severe from the Red River Valley of Texas and Oklahoma to the middle Mississippi and Ohio valleys and progress eastward into the Tennessee Valley during the nighttime hours on New Year’s Eve. 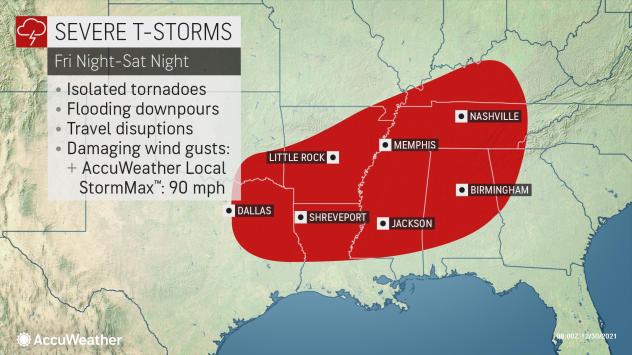 The severe storms and perhaps the tornado risk may continue through the time people finish partying for the night and into New Year’s Day from portions of the southern Appalachians to the central Gulf Coast.

Where heavy rain falls on the same areas from the storm Wednesday night and again on Friday night and Saturday in portions of the lower Ohio and Tennessee valleys, an elevated risk of flash flooding will exist.

The same storm will produce a swath of accumulating snow from portions of the central Plains to the Great Lakes region during the first part of this weekend. The storm will also bring a rapid plunge in temperature that can cause some wet areas to turn into a sheet of ice.