Month's worth of rain falls overnight near Houston

People in the Houston area awoke on Thursday morning to flooded streets and rising rivers as overnight storms unloaded inches of rain across the region.

Most of the rain fell during the overnight hours, but rain lingered throughout Thursday morning adding to the impressive rainfall totals reported across the city.

“Rainfall totals of up to around 8 inches have fallen in the Houston area within the past 12 hours,” the National Weather Service (NWS) office in Houston said on Thursday morning. This is significantly higher than the 5.93 inches of rain that the Houston area measures throughout a typical June. 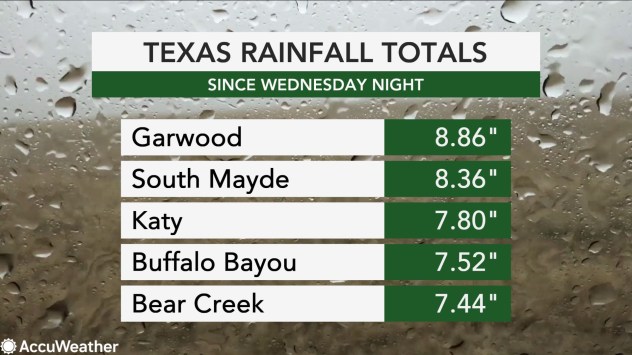 The heaviest rain focused in and just west of Houston with radar estimated rainfall approaching 10 inches near Katy, Texas.

Some roads near Katy looked more like rivers, making travel extremely difficult for motorists heading out on Thursday morning.

“Many of our roads have water up to the curb or just over the curb,” emergency managers from the city of Katy said early Thursday morning. 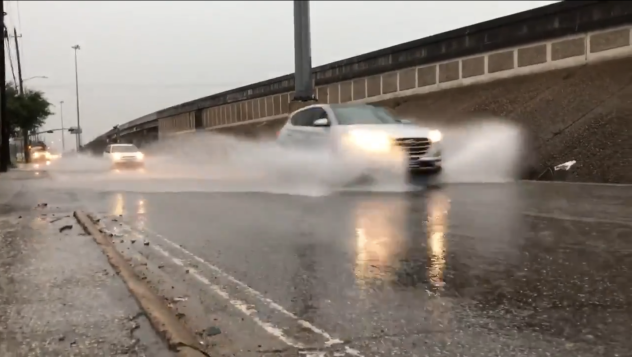 Cars driving through water that has pooled on a street in Houston. (Twitter/@PastorJaimeG)

At least three high-water rescues were conducted near Katy after drivers stalled on a flooded road, KHOU reported.

Experts say motorists should avoid driving on flooded roadways as floodwaters could cause vehicles to stall and even float away with the current. The water that led to water rescues on Thursday morning was less than a foot deep.

MORE: Avoid intersection of Greenhouse & Saums Rd. near Katy — this area is FLOODED.
A @HCSO Sgt. on scene tells me 3 people are stuck in their stalled out cars right now — a high water rescue truck is on the way.
Water is about 8 inches deep. #khou11 #HTownRush #houwx pic.twitter.com/9UOEbZMVFn

This deluge came less than 24 hours after a system soaked the Houston area on Wednesday morning with heavy rain, measuring around an inch across the city. This initial system saturated the ground, leading to more water runoff into streams and rivers that were already starting to swell.

Wednesday’s storms didn’t cause any major disruptions in Texas, but farther east along the Gulf Coast, storms were more intense sparking power outages and property damage.

Four twisters were reported across the region on Wednesday, including an EF1 tornado that tracked through East Baton Rouge Parish, Louisiana. Trees were toppled onto homes and cars with the tornado tracking across a section of Interstate 12 before dissipating.

Early morning storms wreaked havoc as they marched through Louisiana on June 24. AccuWeather’s Lincoln Riddle has the details.

A damage survey released Thursday reported five tornadoes from Wednesday-- two in Mobile County, Alabama and three in George County, Mississippi. Three of the tornadoes were EF1 tornadoes, two of them in Mississippi. The remaining two were listed as EF0 tornadoes.

The risk of additional flash flooding will be possible in the Houston area into the start of the weekend as heavy storms unload more rounds of soaking rain.

However, the threat of thunderstorms will gradually decrease during the second half of the weekend and into the start of next week, giving residents a break from the rain and allowing streams and rivers to return to normal levels.