Tornado outbreak possible in South with 40 million at risk of severe weather. Get the forecast.

South prepares for another round of severe storms

The relentless pattern will send more potentially damaging storms to the southern United States on Wednesday and Thursday.

There seems to be no letup for people in the storm-battered southern United States as the atmosphere will continue to trigger rounds of severe weather, including tornadoes, in the South in both the short term and the long term.

The Easter outbreak, which began on April 10 and extended to April 14, produced more than 1,060 severe weather incidents, including close to 200 tornadoes. 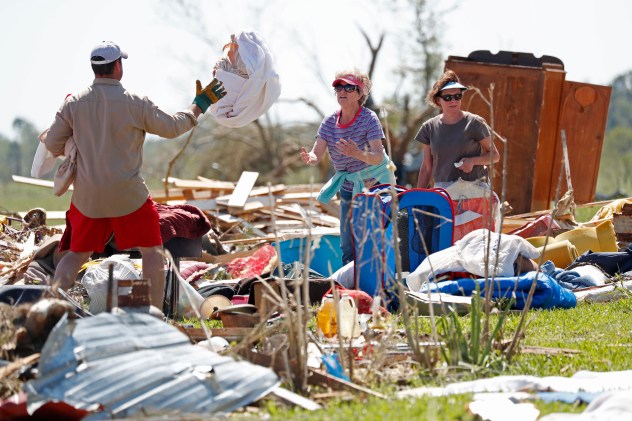 Caren Davis, center, tosses a bag full of salvageable linen to her son Steven Davis, left, as she and her cousin Diana Gray continue to search through her tornado-leveled home for recoverable items, Tuesday, April 14, 2020 in the Williamsburg community of rural Jefferson Davis County, Miss. The family lost several homes to the storm that also claimed four lives in the county Easter Sunday. (AP Photo/Rogelio V. Solis)

Prior to the outbreak on April 18-20, there had been 4,300 reports of severe weather, including more than 410 tornadoes. 2020 is maintaining a top 25th percentile pace for tornadoes to date when factoring in SPC data since the 1950s. 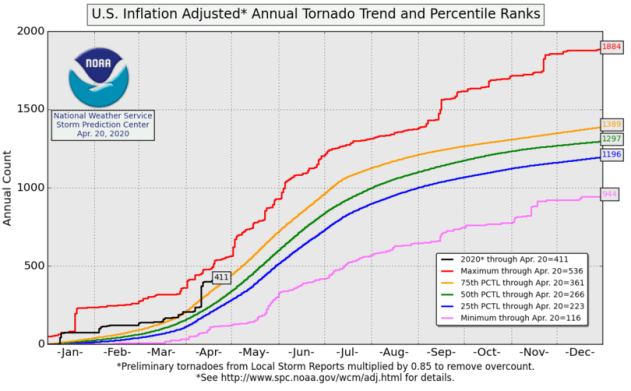 This timeline graph of the count of tornadoes of all years since the early 1950s shows 2020 (black) related to various percentiles. The 75th percentile is shown in gold. The maximum number of tornadoes on record is shown in red. (NOAA/Storm Prediction Center)

To date, the South Central and Southeastern states have made up at least two-thirds of the reported incidents of severe weather.

Meteorologists expect the latest outbreak of severe weather to peak Wednesday evening to Thursday in the Southern states as the relentless pattern continues.

The first storms fired up over parts of the southern Plains late Tuesday, unleashing hail of 2.50 to 3 inches in diameter across portions of southwestern Oklahoma. 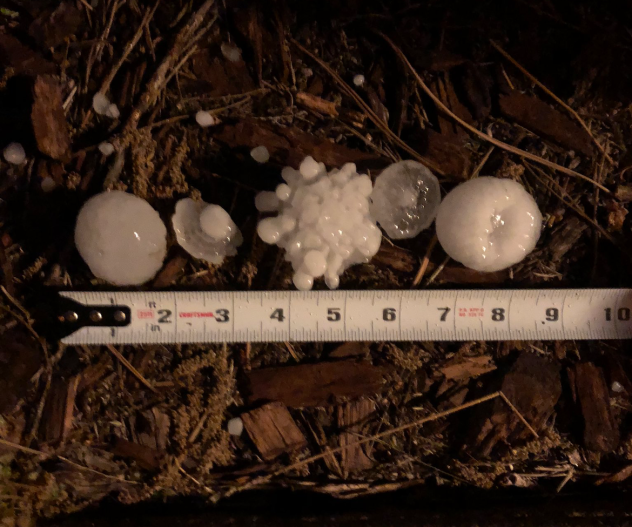 Large hail of various shapes and sizes fell across southwestern Oklahoma on Tuesday night, April 21, 2020. This photo was captured in the town of Sayre. (Twitter/@nicrock90)

However, the main eruption of violent weather conditions is likely from the lower southern Plains to the lower Mississippi Valley and upper Gulf Coast into Wednesday night. 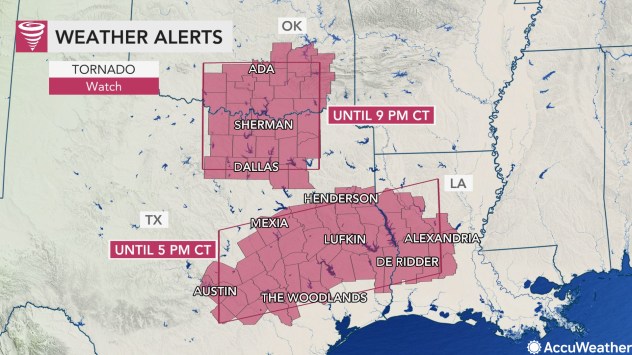 The storms are forecast to maintain much of their intensity as they shift eastward during Wednesday night and Thursday. Potentially life-threatening conditions will persist after dark, including some communities that were slammed by violent weather in recent weeks.

How to safely shelter in place if you ran out of time to evacuate before severe weather strikes
The difference between tornado watches and warnings
How to stay safe when tornadoes strike at night
Tornadoes strike southern Plains, leave 1 dead in Madill, Okla.

"We expect these storms to continue to move across areas of the South which have already experienced multiple severe weather outbreaks already within the past two weeks," Edwards said.

After dark Wednesday evening, the storms will march across the eastern parts of Arkansas and Louisiana and push into Mississippi, southwestern Tennessee and western Alabama.

During Thursday, the storms will continue to progress eastward on through Alabama, eastern Tennessee, northern Florida, Georgia and the Carolinas. 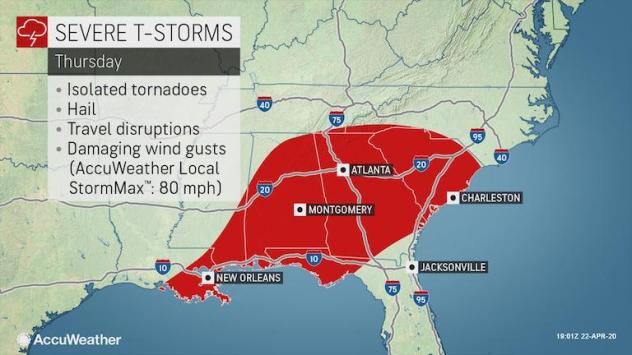 "The storms from Thursday to Thursday evening will pose a similar threat to that of Wednesday afternoon and night with damaging wind gusts, large hail and torrential downpours," Edwards said. There will still be the potential for a few isolated tornadoes on Thursday as well.

In addition to the threat for violent weather conditions, the likelihood of flash flooding will follow the severe weather threat as it shifts eastward.

The round of severe storms will progress eastward through the Carolinas and the northern part of of the Florida Peninsula during Thursday night, according to Edwards. 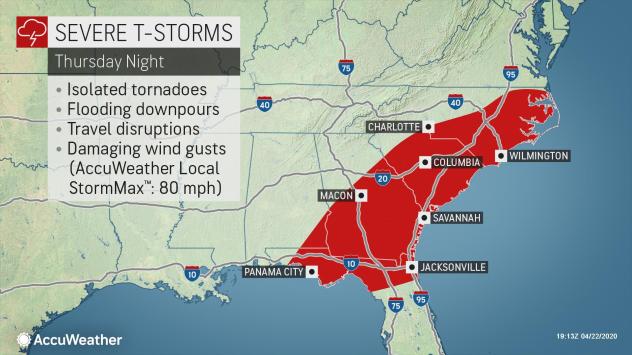 Thursday night will not mark an end to the severe weather episodes. Almost immediately after one round of severe storms approaches the Atlantic coast, the atmosphere may gear up for another round of potential severe weather to ignite farther west. 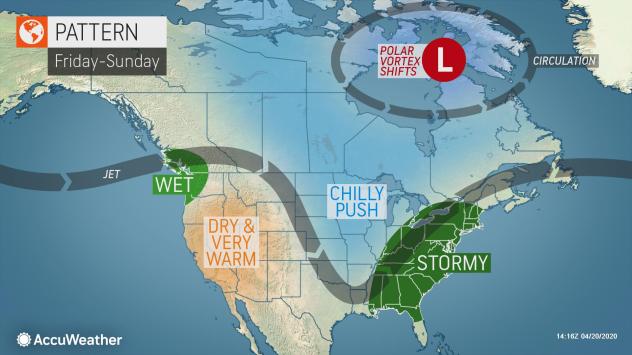 More storms with at least the potential for damaging winds, hail and flash flooding are forecast to erupt over the lower and middle Mississippi Valley on Friday and then progress eastward across the Midwest, South and Atlantic coast during the weekend. 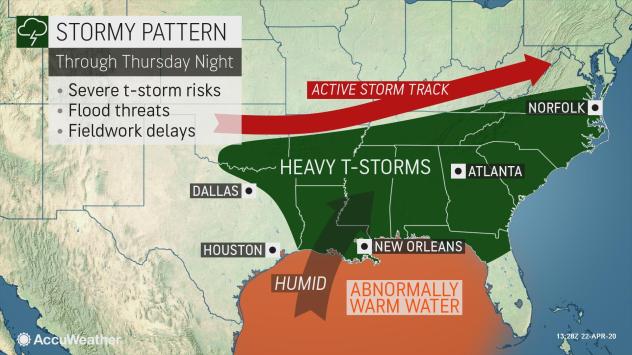 It is possible that the stream of moisture from the Gulf of Mexico may be limited with the weekend event. If so severe weather may be more confined to the immediate upper Gulf and Atlantic coasts and perhaps a secondary pocket over the Ohio Valley.

Beyond that threat, yet another storm system may trigger severe thunderstorms and a potential outbreak beginning on Tuesday or Wednesday of next week over portions of the southern Plains and Mississippi Valley.

As the South continues to reel and deal with the frequent rounds of severe weather, incidents of severe thunderstorms are also likely to increase as the month progresses farther north over the Plains, Midwest and Northeast. How you can help communities devastated by weather this Giving Tuesday