Areas of Idaho, such as Boise and Caldwell, were hit with an earthquake on March 31.

A preliminary magnitude 6.5 earthquake rattled Idaho on Tuesday with shaking felt across the region, including Washington state, Utah, Nevada and Canada.

Tuesday's quake was the strongest in the state since the 1983 Borah Peak earthquake and reportedly killed two people. This earthquake was so strong that the eruptions of Old Faithful in Yellowstone National Park were noticeably longer. 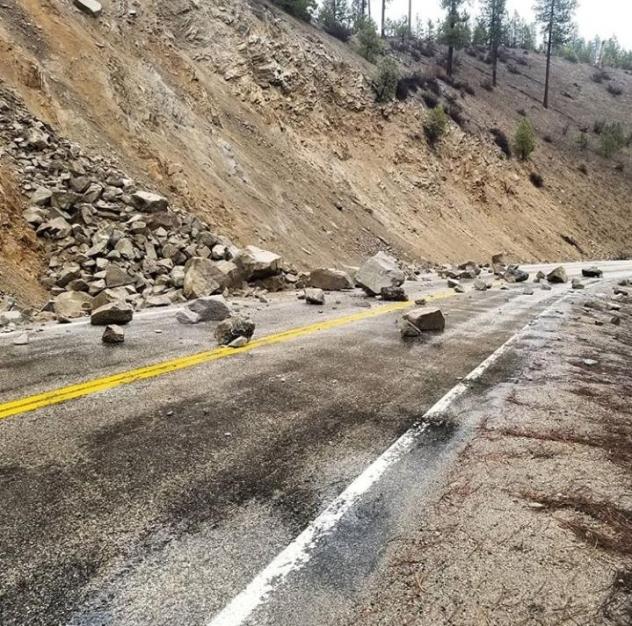 The powerful earthquake triggered a rock slide in Lowman, Idaho. Image via Instagram/Maverick_36

“The magnitude 6.5 Idaho earthquake was located in very rugged, remote part of south-central Idaho, so the worst of the shaking took place away from all but small population centers,” AccuWeather Meteorologist Jim Andrews said.

The epicenter of Tuesday's earthquake was located approximately 78 miles (126 km) northeast of Boise and struck at 5:52 p.m. local time, according to the USGS. 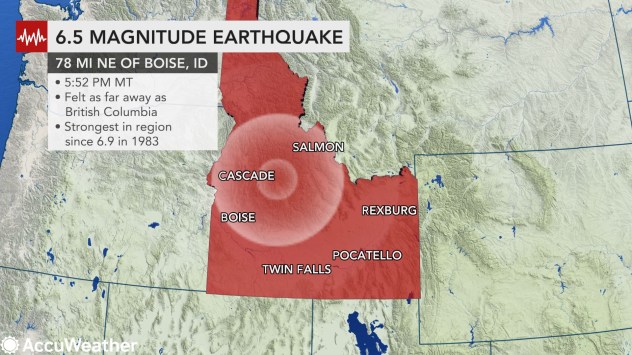 “Earthquakes above magnitude 6.0, and at depths of approximately 10 miles or less, can certainly cause major destruction and loss of life if they strike beneath cities or other high population areas. The susceptibility of the ground to shaking is a factor, too, as this can vary widely for a given magnitude earthquake,” Andrews said.

"Boise, yes you did feel an earthquake. City officials are checking all our facilities and public safety officers are conducting structural checks downtown and in our neighborhoods," Boise Mayor Lauren McLean said in a Twitter post.

The Boise Police Department said there were no reports of damage..

There are reports of shaking felt in Emigrant, Montana, which is approximately 30 miles north of Yellowstone National Park.

“Did You Feel It” reports showed felt responses reach at least to the Canadian border — more than 300 miles to the north.

People took to social media to share videos and comments about the quake. One Twitter user tweeted a video of a chandelier swaying saying the earthquake was felt more than 500 miles away in Kelowna, British Columbia, Canada.

Felt the earthquake from Idaho in Kelowna, BC! #earthquake pic.twitter.com/PukmQVi60A

A hospital about 65 miles south of the epicenter shook, but the shaking didn’t interfere with the treatment of patients, Marcus Smith, an emergency room health unit coordinator told the Associated Press. The hospital, St. Luke’s Wood River Medical Center, in Blaine County is in a region with the highest per-capita rates of known coronavirus cases in the nation outside of New York City and surrounding counties.

“The present earthquake struck near the edge of the Rocky Mountain seismic zone, an area of relatively restless crust and frequent, mainly minor earthquakes reaching southward from Idaho and western Montana south to Utah,” Andrews said.

The earthquake was so significant that it was the second largest earthquake in the entire world in the last 30 days, according to The National Weather Service in Boise.

Since the earthquake struck last night, at least 45 aftershocks have occurred around the area, averaging a magnitude of around 3.5.

The USGS saw a delay in getting the report of the earthquake out quickly because of the social distancing caused by COVID-19, head of the University of Washington seismology lab Paul Bodin told KING.

Less than two weeks ago, a 5.7-magnitude earthquake struck near Salt Lake City, causing evacuations around the city and temporary closing the local airport.

“For an earthquake of this size, we can expect to feel some aftershocks for the next week and they should taper off. Probably something similar to what Salt Lake is experiencing in terms of aftershocks." Associate geoscience professor at Boise State University Dylan Mikesell told KTVB.