A big change in the weather pattern will benefit firefighting efforts across fire-weary southeast Australia into next week.

Recent rainfall and cooler weather allowed firefighters to contain some blazes across Victoria and New South Wales in the past week; however, more than 80 fires are ongoing in New South Wales and nearly 20 blazes continued to burn in Victoria as of Wednesday.

A brief period of hot and dry weather elevated the fire danger across parts of Victoria and New South Wales into Wednesday. 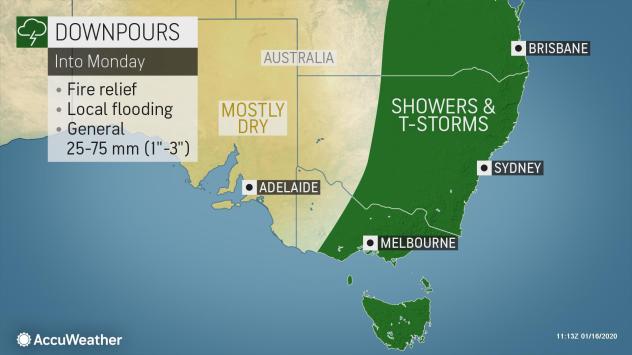 Smoke from wildfires continued to blow across Victoria and New South Wales on Wednesday before some relief finally arrived.

The smoke created poor air quality in Melbourne on Tuesday and Wednesday, which disrupted qualifying for the Australian Open and caused complaints from several players.

The heat and poor air quality was washed away by afternoon thunderstorms that brought 25 mm (1 inch) or more of rainfall to Melbourne and surrounding areas as a cold front moved through the area.

The cold front continued to advance across the remainder of southeast Australia on Thursday bringing further relief from the recent heat and poor air quality, but will spark widespread showers and thunderstorms.

The cooler air arriving with the rainfall will hold through the upcoming weekend with daily highs near or below 27 C (80 F) in Sydney, Canberra and Melbourne.

Central and eastern Victoria and New South Wales, as well as the Australian Capital Territory, will all have an increased chance for rainfall starting Thursday.

Daily downpours will be possible across the same areas from Friday into early next week.

Rainfall amounts of 25-75 mm (1-3 inches) will be common through Monday with an AccuWeather Local StormMax™ rainfall of 150 mm (6 inches) in eastern New South Wales.

While this rainfall will not be enough to fully extingish the largest blazes, some smaller bushfires may be brought under control by the upcoming rainfall.

The improved conditions may also allow firefighters to get better containment on the larger and more dangerous fires, including the "megafire" that developed when three fires merged into one last Friday along the New South Wales and Victoria border.

According to The Sydney Morning Herald, the blazes combined to char nearly 2 million acres and have burned an area eight times larger than Hong Kong.

More than 2,100 homes have been destroyed since the season began, including over 1,200 since Jan.1. Over 24,000 buildings have been saved, according to the New South Wales Rural Fire Service.

The downside of the storms will be the increase in lightning strikes that could create new fires, but this risk will be more than outweighed by the benefits of rainfall across the region. 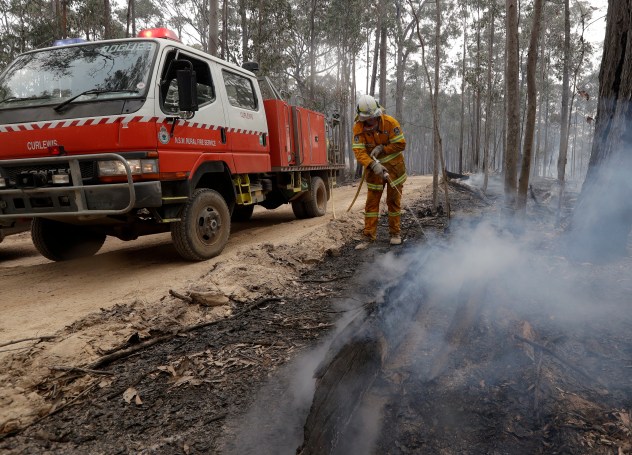 A firefighter patrols a controlled fire as they work at building a containment line at a wildfire near Bodalla, Australia, Sunday, Jan. 12, 2020. Authorities are using relatively benign conditions forecast in southeast Australia for a week or more to consolidate containment lines around scores of fires that are likely to burn for weeks without heavy rainfall. (AP Photo/Rick Rycroft)

Another concern will be for localized flooding as the downpours fall in the same locations for multiple days in a row.

The combination of thunderstorms and heavy rainfall may also result in travel disruptions on any given day in Canberra and Sydney.

Following Wednesday's severe thunderstorms in Melbourne, the next threat for widespread rainfall in the city will be Sunday into Monday. This rain may cause issues for the start of the Australian Open on Monday.