What you need to know about birdwatching

According to Google trends, searches for "birds" reached an all-time high in the U.S. in May. The fast-growing hobby is fun and easy to do, right in your own backyard. Take a look!

Many people have started picking up new hobbies like birdwatching to pass the time safely from the comfort of their homes and backyards.

Birdwatching has been soaring, to say the least, since the coronavirus pandemic began keeping much of the population homebound over the last two months or so as Americans look for more safe activities that can be done from home.

Preliminary numbers showed in early May that since restrictions began going into effect, the sale of bird feeders, nesting boxes and bird seeds jumped in demand, according to The Associated Press.

Data from Panacea Products Corp. also showed a 10% to 15% increase in birdwatching-related items.

“I’ve paid attention but not like recently with the COVID," amateur bird watcher Marian Koch of Sugar Valley, Pennsylvania, told AccuWeather Senior Producer Monica Danielle. "We’ve been home and we just get so excited," she continued, referring to her husband, George Koch. "We call each other to the door and the window ... It’s just given me a new excitement.” 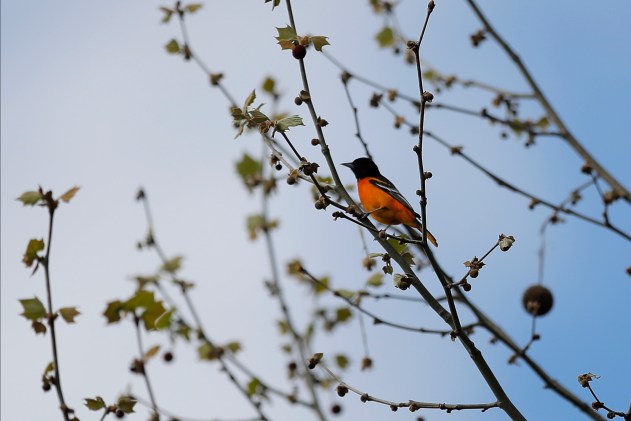 A Baltimore oriole is seen on a tree at Loch Raven Reservoir, Tuesday, May 12, 2020, in Glen Arm, Md. (AP Photo/Julio Cortez)

The Kochs said their rising interest in birdwatching coincided with the COVID-19 restrictions that were put into place in their area, a small town just south of Interstate 80 in north-central Pennsylvania. They even bought a book to help them recognize birds.

These days, Marian and George are both noticing the many types of birds that have come to their feeders.

“Robins. Hummingbirds. Lots of them. They’re all over here. Bluebirds in both our bluebird houses. Woodpeckers. Pilated and little ones," Marian said.

George confessed, "I really get crazy about the orioles." He said the orioles can be very finicky about the types of enticements he leaves out for them. "They prefer Smucker's grape jelly," George revealed, adding that orioles can get "a little funny if you try to give them some other kind of jelly."

George wakes up early to put bird seeds in the feeder at around a quarter til six, saying that the birds seem to like the sunflower and oiled seeds the most. 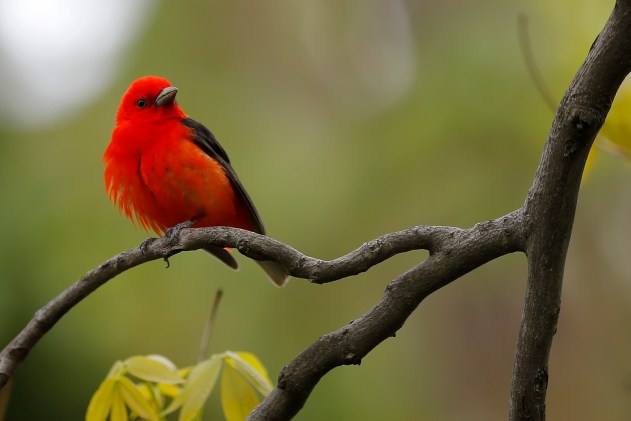 A male scarlet tanager is seen on a tree on World Migratory Bird Day, Saturday, May 9, 2020, in Lutherville-Timonium, Md. (AP Photo / Julio Cortez)

Now is also the perfect time for new watchers to start taking up the hobby, like the Kochs have. With May in full swing, peak migration for hundreds of bird species, as well as nesting season, are all occurring.

This means that there will be a higher potential for different types of birds to visit. Seeing as many of these birds as possible will also depend on different tips and methods.

One of the most helpful tips for birdwatching is to be quiet and make no sudden movements. Birds are small and fragile animals that have much better hearing than humans and can be easily startled by even noises or actions that aren't that loud.

Another tip is to become familiar with the surroundings and what type of birds may be in those areas.

There are smartphone apps, such as Merlin, that will help with identifying birds. This app allows users to upload photos of birds so it can identify what species it is.

These apps have all seen big jumps in downloads recently, with Merlin growing 102% over the same time last year. 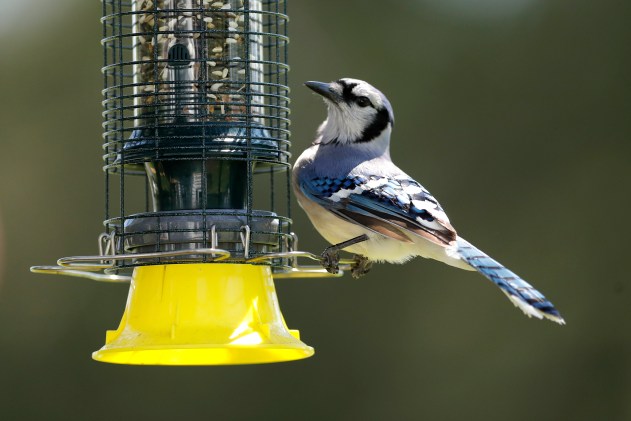 According to Bird Watcher's Digest, another good beginner's tip for birdwatching is to be patient. Birdwatching hinges on being patient and waiting for the birds.

While birdwatching isn't as easy if you live in an apartment or a city, there are still ways to participate in it without looking out your window.

Cornell Lab launched a Bird Cams Lab which hosts many birdwatching webcams to allow viewers from all over the world to see birds visit feeders in realtime.

The Cornell Lab also offers all kinds of courses and resources for beginners to learn more about birdwatching.

McGowan also explained how the Cornell Lab has a "Birdcast" which is where predictions on where the highest amount of bird migrations occur based on the weather.

“Weather is deadly important for birds ... because they don’t want to get hammered by strong winds going in the opposite direction of where they want to go," said McGowan. "But they also want to take advantage of the strong winds going in the direction that they wanna go. It’s one of those things if you watch the basic weather flow, the airflow in the spring, there’s strong south winds in the center of the continent all the time and that’s a major migratory route for birds trying to get to Canada and the Boreal forest to breed."

However, good weather can also cause fewer types of birds to be seen during migration. When birds flies into inclement weather, they will make a stop where they are, making them seen in unique places, until the bad weather passes.

“Good weather for the birds can mean bad birding because they all get there on time and they don’t need to stop in New York if they’re heading to northern Quebec,” said McGowan.

When will summer heat up? AccuWeather forecasters answer that and more in 2020’s outlook
Everything you need to know about spring fever
Wind under bird’s wings fast tracks him 4,677 miles from Africa to Europe in 7 days