The zoo is livestreaming video from the happy family's den daily until next spring when the public will be able to see the babies in person. 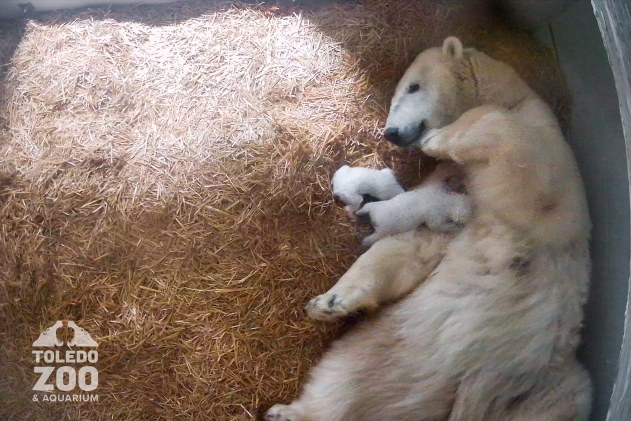 Crystal, a 24-year-old female polar bear, is shown with her newborn twin cubs at the Toledo Zoo. (Toledo Zoo & Aquarium)

(CNN) -- This Saturday just got twice as cute.

The Toledo Zoo has announced the birth of two polar bear cubs, the first time polar bears have been born at the facility since 2012, according to an Instagram post from the zoo.

The two bundles of joy were born Dec. 1 to 24-year-old mother Crystal and 18-year-old father Nuka. The cubs' gender is still unknown, says the zoo.

The babies are not on display just yet. The zoo says the public will be able to see the cubs in spring 2023.

In the meantime, the zoo is livestreaming video from the happy family's den from 9 a.m. to 4 p.m. each day.

Crystal and Nuka were paired based on the advice of the species survival program, which issues breeding recommendations for endangered species in zoos to ensure genetic diversity in the population.

Although the cubs look tiny now on the livestream, as adults they will be massive predators. Adult male polar bears weigh between 800 and 1,300 pounds, and females weigh between 300 and 700 pounds, according to the World Wildlife Fund.

Polar bears are categorized as vulnerable by the International Union for the Conservation of Nature. The species faces serious population decline due to climate change and the loss of their habitats in the Arctic.

A woman and her work colleagues were awestruck at the sight of a polar bear crossing this snowy road in Gillam, Manitoba, on Dec. 7.