After a few months of little to no activity, several new hazardous algae blooms have formed off the coast of Southwest Florida after Hurricane Ian churned up Gulf sediment and created eye-catching blue waters.

Satellite imagery of South Florida on Sept. 25 and Sept. 30, before and after Hurricane Ian struck the Florida Peninsula. The photos show how thick clouds of sediment seeped into the Gulf of Mexico in the days following Hurricane Ian, and a large patch of lighter blue water accredited to kicked-up sediment from the storm garnered national attention. (VIIRS Today/NOAA)

A handful of southwestern Florida counties impacted by Ian are experiencing a potentially harmful algae bloom a month after the storm.

Microscopic algae known as Karenia brevis, a species that causes the health-threatening red tides in the Gulf of Mexico, was detected at levels up to high concentrations in water samples taken last week both in and offshore of Sarasota, Charlotte, Lee and Collier counties, according to the Florida Fish and Wildlife Conservation Commission (FWC).

Of the 57 samples where Karenia brevis was observed, bloom concentrations were present in 18 samples -- four in and offshore of Sarasota County, nine offshore of Charlotte County and five offshore of Lee County.

Red tides occur naturally off the shore of Florida and are most common off the central and southwestern coasts of the state between Clearwater and Sanibel Island, according to the FWC. However, archived data shows the algae was not present or present only in background concentrations throughout the month of September. The last time the algae had been recorded in at least "very low" concentrations was back in June.

After the increase of blooms following Hurricane Ian, Tracy Fanara, a hydrologist who spent seven years researching red tide with Mote Marine Laboratory in Sarasota County, hypothesized that impacts from Ian initiated and then contributed to the growth of the blooms.

The current theory surrounding the formation of red tide blooms is that they begin offshore at the bottom of the ocean and move toward the shore with currents or upwelling events -- when winds displace surface water and nutrient-rich waters rise to the surface -- like those created by a hurricane, Fanara told AccuWeather via email.

The relationship between blooms and hurricanes is indirect, she stressed, as the blooms are influenced more by the ocean physics created by hurricanes and the chemistry change the storms set into motion. 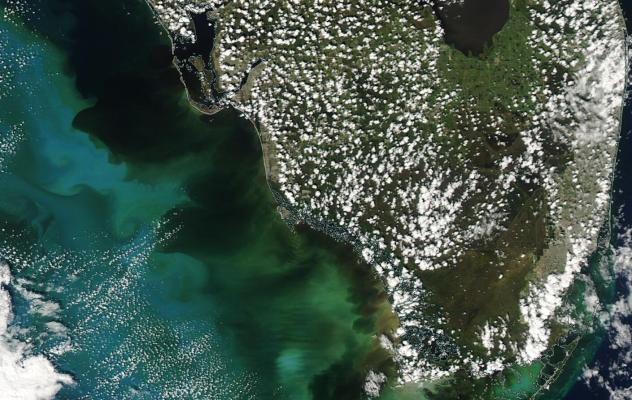 Runoff sediment seeped into the Gulf of Mexico on Oct. 4, 2022, a few days after Hurricane Ian. (NOAA/Aqua/MODIS)

"We've seen hurricanes indirectly initiate blooms and we've seen them dissipate blooms, and we've seen them not have an impact at all," Fanara said. "Water movement offshore of Tampa Bay during Hurricane Ian looked very similar to Hurricane Irma, which also inspired upwelling followed by [the] indication of a Karenia brevis bloom in the following weeks."

The two-year bloom that followed Hurricane Irma (2017) was exacerbated in 2018 by a heavy storm. The heavy rain prompted a release of water from Lake Okeechobee, which contained toxic freshwater algae, and drained into the existing red tide bloom along with nutrient-rich runoff.

After Hurricane Ian charged through, the runoff from rivers was visible from space. 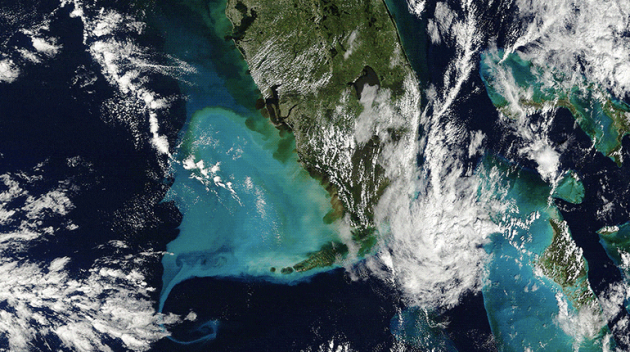 Satellite photos from NOAA showed thick clouds of sediment seeping into the Gulf of Mexico in the days following Hurricane Ian, and a large patch of lighter blue water accredited to kicked-up sediment from the storm garnered national attention.

Ian and Irma are not the only hurricanes that were closely followed by red tide blooms.

A red tide that lasted for four years bloomed in the aftermath of four hurricanes -- Charley, Frances, Ivan and Jeanne -- that cut through the Gulf of Mexico in 2004, each making landfall in Florida.

Another bloom followed in the wake of a hurricane as recently as late fall of 2020 following Hurricane Eta. The bloom was then exacerbated in 2021 when currents and Hurricane Elsa pushed a patchy bloom into Tampa Bay following the release of wastewater from an abandoned phosphate mine during the spring, Fanara said. 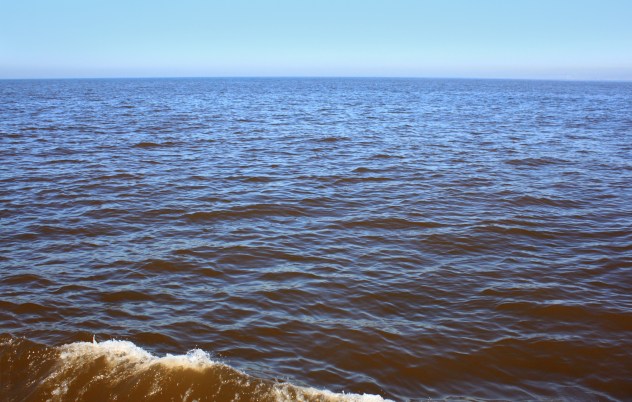 The duration of the bloom will be highly dependent on how long favorable conditions stick around, not all of which can be forecast. Ocean physics such as the currents, salinity and water temperature; the availability of nutrients; and the phytoplankton community all influence the duration. The longer the bloom sticks around, however, the more the onshore blooms pose a risk to health.

Cases of respiratory irritation suspected to be related to red tide were reported throughout the week in Sarasota County, the FWC added.

A toxin called "brevetoxin," capable of aerosolizing, or turning into an aerosol, is what makes a red tide hazardous, Fanara said.

"The toxin is hydrophobic, so it concentrates on bubbles and sea foam -- when these bubbles burst, the toxin can attach onto sea salt particles in the air and move onshore with winds," Fanara said. The particles can cause coughing and sneezing, but can seriously impact people with asthma, COPD and other respiratory illnesses.