Area of tropical concern being closely scrutinized in Caribbean

AccuWeather meteorologists are watching an area in the southwest Caribbean Sea which could become the next organized tropical threat in the Atlantic.

On Monday, satellite imagery showed pockets of clouds and thunderstorms shifting across the western Caribbean. While these thunderstorms can bring heavy downpours to parts of Central America, the chances for a tropical system to organize prior to June 15 is unlikely due to multiple factors. 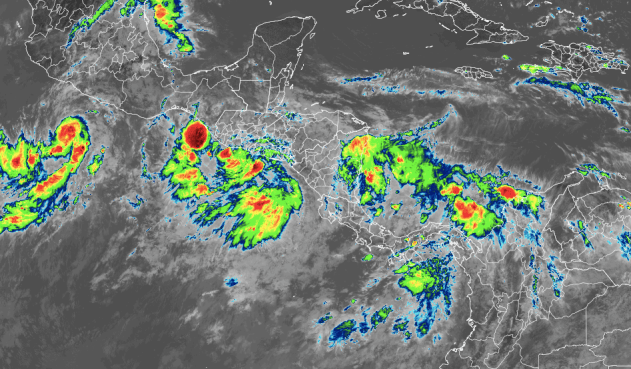 While the majority of thunderstorm activity was centered over the Pacific, thunderstorms continued to erupt over the southwestern part of the Caribbean Sea (left of center) on Tuesday, June 14, 2022. (GOES-East/NOAA)

Saharan dust expanding across the tropical Atlantic basin is one of the factors that will inhibit Atlantic tropical development through midweek. The dust spreading over the Caribbean Sunday resulted in dull skies and limited visibility to locations such as Puerto Rico and Hispaniola.

However, the dust is expected to lessen across the southwest Caribbean for a short window of time from Thursday to Friday.

The latest meteorological data indicates that an enhanced swath of thunderstorm activity will likely erupt and push across the southern Caribbean around midweek. Forecasters say that an area of low pressure will form and potentially become better organized as the week progresses. 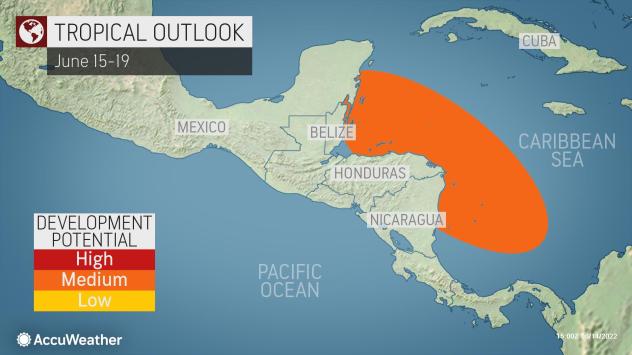 Conditions that would help nurture the development of a new tropical system, such as enhanced moisture and low wind shear, now have about a medium chance to unfold later this week.

Additionally, sea-surface temperatures across the western Caribbean are currently above the minimum threshold for tropical development, which is 79 to 80 degrees Fahrenheit. Ocean waters along the Nicaraguan and Honduras coastline are now hovering around 86 F, according to the Ocean Prediction Center.

If tropical formation occurs, the strongest winds would likely ramp up along the coasts of eastern Nicaragua and far eastern Honduras from Thursday into Friday. Other impacts like occasionally rough seas could occur across the western Caribbean Sea.

On June 5, the first tropical storm of the 2022 Atlantic hurricane season was named as it shifted off Florida's southeast coast. Designated as Tropical Storm Alex by the National Hurricane Center, the feature brought flooding rain to western Cuba, South Florida and the Bahamas before tracking over Bermuda.

If tropical development takes place from later this week into this weekend, the steering pattern of winds in the upper levels of the atmosphere would guide any organized feature along a vastly different track than Tropical Storm Alex.

The westward to northwestward steering currents across the western Caribbean would likely direct any feature that develops toward Central America, southern Mexico or even the Texas Gulf Coast.

The next tropical storm that forms in the Atlantic basin will be named Bonnie. 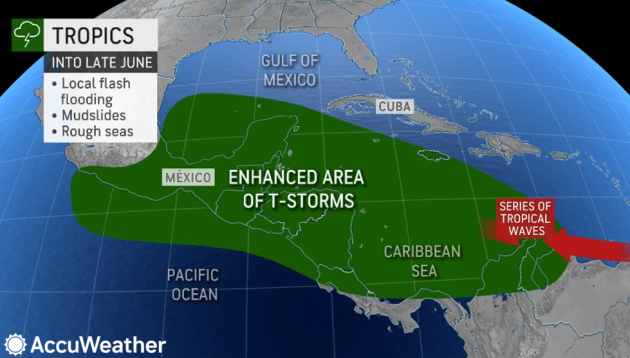 Although the chances for development remain, there are still some roadblocks across the Caribbean Sea that could hinder a tropical system’s formation.

"The proximity to land and the wind shear across the region will end up limiting development. While low pressure may develop, it just might not be able to consolidate enough into a tropical system," according to AccuWeather Senior Meteorologist Adam Douty.

Even if tropical development does not take place, the unsettled pattern will still bring various impacts to parts of Central America.

"Regardless, residents will want to be alert for heavy rain and flash flooding, especially from the middle to end of the week from eastern Nicaragua into Honduras," explained Douty.

One of world's most famous waterfalls thunders again after heavy rains

As gas prices soar, so does hesitancy toward hurricane evacuations