As Hinnamnor continues to churn over the East China Sea Monday afternoon, local time, it is following the track predicted by AccuWeather meteorologists to push northward and eventually strike parts of southern Japan and South Korea with flooding rain and punishing winds.

As of Monday afternoon, local time, Hinnamnor had 10-minute sustained winds of 92 mph (148 km/h), equivalent to a Category 2 hurricane on the Saffir-Simpson Hurricane Wind Scale. Satellite imagery showed that Himmamnor had regained a well-defined eye on Sunday, after fluctuating in wind intensity on Friday and Saturday. However, the storm has once again lost this eye as of Monday afternoon, local time.

Hinnamnor has been classified as a typhoon by the Japan Meteorological Agency as of Monday afternoon, local time. 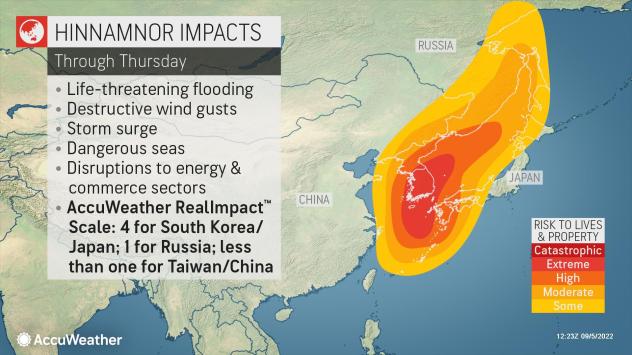 "Hinnamnor is then expected to curve northward this weekend, then should accelerate northeastward early this week," explained AccuWeather Lead International Forecaster and Senior Meteorologist Jason Nicholls.

Although the wind intensity may decline, the copious amount of rainfall that is expected from this monster of a storm could bring life-threatening flooding across the southern Ryukyu Islands, northern Taiwan and South Korea. 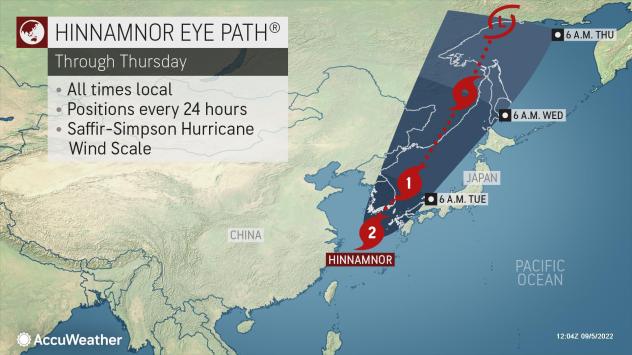 Widespread rainfall amounts of 8-12 inches (200-300 mm) could be measured across the Ryukyu Islands into South Korea and far western Japan, with an AccuWeather Local StormMax™ of 30 inches (760 mm) of rainfall possible in some localized areas. Rainfall of that magnitude would lead to substantial flooding, experts say, and localized rainfall amounts could reach higher totals if the typhoon were to stall right over a particular location.

Numerous days of drenching rainfall and severe winds will persist around the Ryukyu Islands as the storm slows to a crawl late weekend, which will lead to catastrophic damage across the islands. 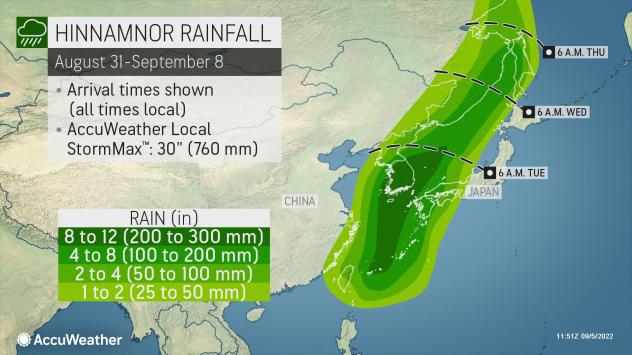 The typhoon's presence is also being felt in parts of China.

Some of the outer rain bands from Hinnamnor may even bring an inch or two of rainfall to Shanghai. The city of more than 26 million people recently picked up one-third of its monthly rainfall in August last Monday. Extensive heat waves and drought over the past few months have left the city and the surrounding areas desperately in need of rainfall, and Hinnamnor may bring some much-needed precipitation to the region.

Bands of rain began to impact some portions of southern mainland Japan on Saturday local time as the storm moved into the East China Sea. AccuWeather forecasters say rounds of heavy rain will be possible there through Tuesday night.

In South Korea, drenching downpours began to break out on Sunday as a cold front interacts with the tropical moisture brought north by Hinnamnor. Forecasters say that the outbreaks of rain can last through Tuesday in some eastern areas. 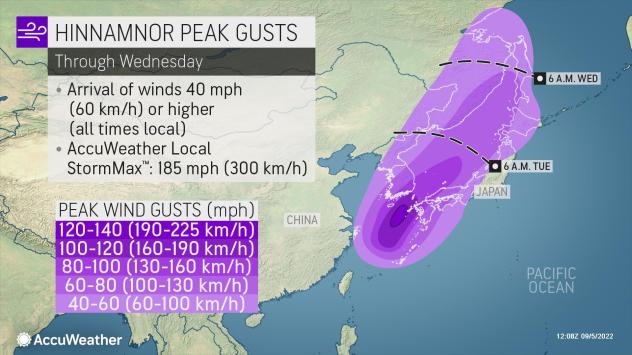 The strongest winds, and most significant impacts from wind damage, will occur near and to the east of the track of Hinnamnor, from the southern Ryukyu Islands to coastal portions of far southern and western mainland Japan and southern South Korea.

Peak wind gusts from the typhoon of up to 120 mph (195 km/h) are expected in these areas near the center of the storm, with an AccuWeather Local StormMax™ of 185 mph (295 km/h). Winds of this magnitude will bring widespread structural damage and long-lived power outages and disruptions to life.

Dangerous storm surge, flooding and coastal inundation will also threaten coastal communities in southern South Korea and southern Japan, making Hinnamnor a 4 on the AccuWeather RealImpact™ Scale for Tropical Cyclones for South Korea and Japan, while the impacts from Hinnamnor will be less than one for Taiwan and China.

Hinnamnor is expected to track between the Korean Peninsula and Japan from Monday to Tuesday where it will be picked up by a cold front and race northeastward before it eventually loses wind intensity.

The typhoon could start to lose some wind intensity once the system is drawn northward into slightly cooler waters. However, even in a weakened state, the storm could still generate an impactful amount of rain for parts of South Korea and Japan, according to AccuWeather meteorologists.

Hinnamnor is the world’s most powerful tropical cyclone so far this year, with a greater maximum sustained wind speed than Cyclone Batsirai, which roamed the southwestern Indian Ocean back in February.

NASA's Viking 1 may have landed at the site of an ancient Martian mega...