Developing tropical system is one for the US to watch 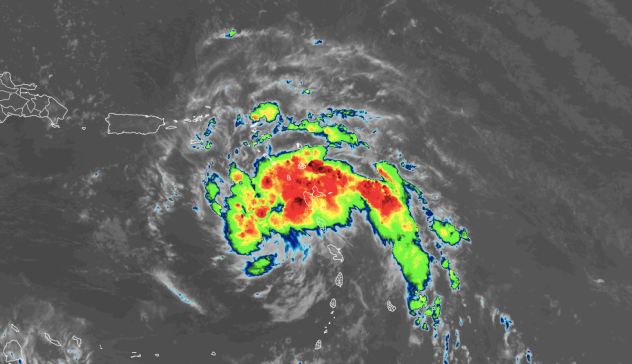 Tropical trouble is brewing in the Atlantic. AccuWeather meteorologists say a system that was becoming better organized in the basin early this week has the potential to become the sixth tropical depression and named storm of the 2021 Atlantic hurricane season at any time. Forecasters will be tracking the system, which could be named Fred, since it could approach Florida or the Gulf of Mexico by the weekend.

As of Tuesday midday, the system, dubbed Potential Tropical Cyclone Six by the National Hurricane Center (NHC), was located over the northeastern Caribbean Sea, 220 miles east-southeast of Ponce, Puerto Rico, and was moving toward the west-northwest at 18 mph. 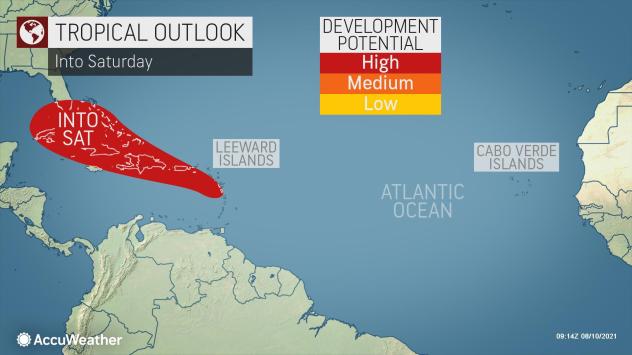 "This system has a window to develop as it moves west-northwestward through the Caribbean into Wednesday due to low wind shear," AccuWeather Chief On-Air Meteorologist Bernie Rayno said. Wind shear is the abrupt change in strength or direction of breezes at increasing height in the atmosphere or across the sea surface.

The system moved over the Leeward Islands late Monday into early Tuesday morning. It will continue its track northwestward and pass just south of the U.S. Virgin Islands and Puerto Rico Tuesday and then over the Dominican Republic and Haiti at midweek. 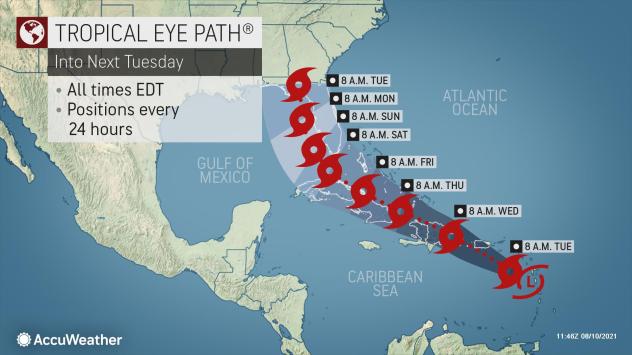 As the system moves westward, an uptick in showers and thunderstorms will occur along with building seas and surf along the way, even if the center does not pass directly over some of the islands. Some locations from the Leeward Islands to Puerto Rico and Hispaniola can be hit with locally torrential rain that can lead to flash flooding, mudslides and road closures. Locally strong wind gusts can lead to power outages and property damage.

"The tropical system will bring a general 1-2 inches of rainfall with locally higher amounts to the Lesser Antilles into early Tuesday," Pydynowski said. 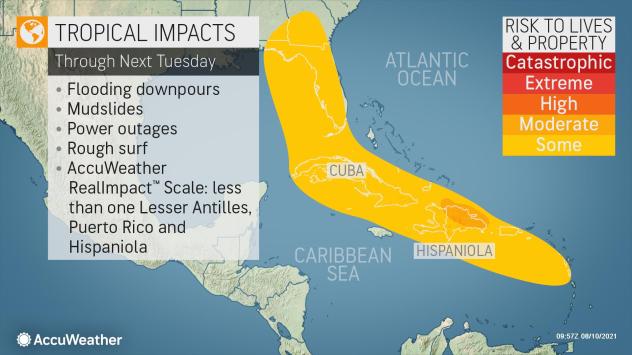 The feature, perhaps as a tropical depression or storm, is expected to bring wind gusts of 40-50 mph into early Tuesday as it crosses the Lesser Antilles.

Since wind shear at mid-levels of the atmosphere and steering breezes near the surface of the ocean may change during the second half of the week, the exact track and strength of the system is less certain after that point.

"The system is being guided along to the west-northwest by the circulation around a large area of high pressure over the central Atlantic," AccuWeather Hurricane Expert Dan Kottlowski said.

The elongated, oval shape of this high pressure area, if it was to remain consistent, would guide the system all the way into the Gulf of Mexico.

However, Florida and the Florida Keys may be in the path that the system will take. This scenario could unfold if the high pressure area weakens and allows the system to turn more to the north later this week, Kottlowski explained. 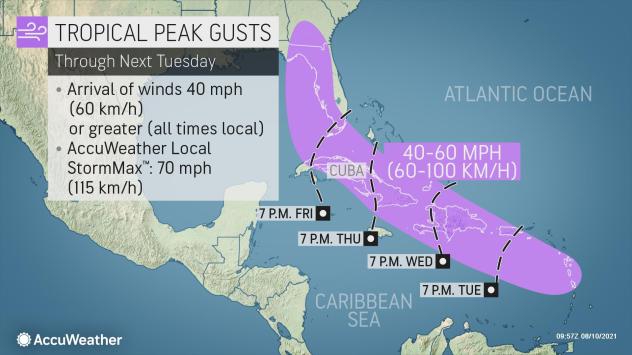 As the system, likely as a tropical storm, passes near or over Hispaniola and Cuba, some the greatest impacts are anticipated in the Caribbean.

The system is forecast to intensify into a tropical storm before impacting Hispaniola around midweek with widespread wind gusts of 40-60 mph and an AccuWeather Local StormMax™ of 70 mph.

"Heavy rain amounts are forecast from late Tuesday into Wednesday across much of Hispaniola, where 4-8 inches can occur in the highest terrain with an AccuWeather Local StormMax™ of 12 inches," Pydynowski added.

From Wednesday through the end of this week, interaction with the large islands of Hispaniola and Cuba, as well as any increase in wind shear, could disrupt or limit the strengthening process, Rayno said.

These large islands have significant mountainous terrain, which can put a drag on the tropical system. When steering breezes remain from the east, and a tropical system approaches from that direction around Hispaniola and Cuba, the center may sometimes remain just offshore or travel right along the southern or northern coasts of these two big islands. Should this occur, it is possible for the system to remain organized or possibly strengthen as a result. 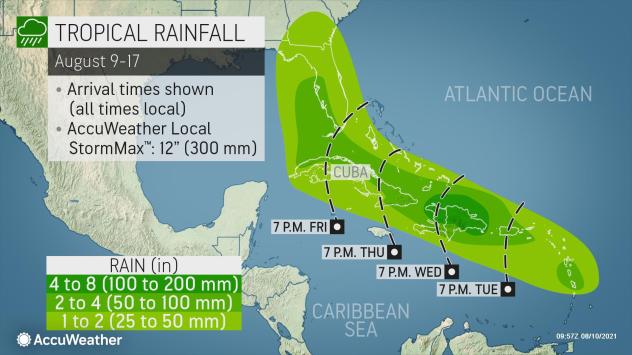 As a result, people from Jamaica and the Cayman Islands to Cuba, the southern Bahamas, the Florida Keys and South Florida should monitor the progress and track of the system. For example, should the feature take a more northerly jog, showers, thunderstorms, seas and surf may begin to increase over South Florida and the Keys as early as late Friday or Friday night ahead of the center, which may not arrive for 12-24 hours later during the weekend. Since Elsa diminished, the basin turned quiet for much of July and early August.

An uptick in tropical activity during the middle and latter part of August is routine due to several factors. AccuWeather meteorologists warned that the Atlantic would awaken from its midsummer slumber last week when an increase in moisture, a decrease in the amount of dust from the Sahara Desert and a reduction in wind shear became evident. 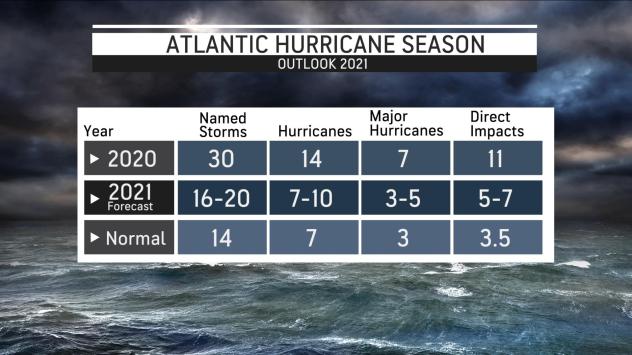 Elsa took a similar track through the Caribbean before eyeing the U.S., but it was slightly farther south than the path currently projected for the developing tropical system. Elsa brought drenching showers, thunderstorms and locally gusty winds to part of the Florida Peninsula before making landfall north of Tampa, Florida, during the morning of July 7.

For a time, the 2021 hurricane season was going neck and neck with the record-breaking 2020 season, which spawned 30 named systems and 11 hurricanes.

AccuWeather's team of meteorologists are expecting 16-20 named systems with seven to 10 hurricanes for this season. There have already been three landfalls in the U.S. this year with a total of five to seven anticipated, including one or more threats along the East Coast of the U.S., as the season continues to unfold.