August development record may be spoiled as Atlantic awakens

Meteorologists have all eyes on the tropics in a race against time. Will one or more tropical systems develop before the end of the month? Or will a quarter-century-long record fall as the calendar changes to September?

Forecasters have been meticulously monitoring the Atlantic Basin for tropical activity, and several zones have favorable tropical conditions in the coming week, including multiple disturbances over the open waters of the Atlantic.

The waters between longitude line 40 west and the easternmost Caribbean Islands look particularly favorable for development.

"Confidence continues to grow that a tropical system will develop in the central Atlantic this week," said AccuWeather Meteorologist Brandon Buckingham.

As the wave approaches this area, it could strengthen. Even without tropical development, it is likely it could impact the northern Windward Islands with gusty showers and rough surf before the end of the week. This includes the islands of St. Johns, Antigua, Barbuda and Anguilla. 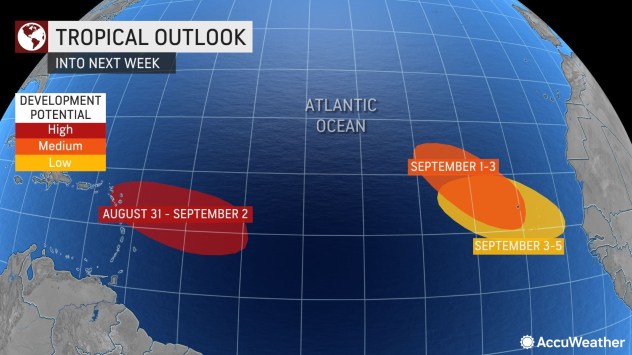 This area was largely missed by tropical storms and hurricanes last year. However, in previous hurricane seasons, the region was impacted by powerhouse hurricanes like 2017's Jose, Irma and Maria. In less than a month's time, all three major hurricanes slammed the northern Windward Islands and other islands of the Caribbean around the peak of the Atlantic hurricane season on Sept. 10. Destructive winds, storm surge and flooding devastated the region.

This tropical wave would have to ramp up uncharacteristically quickly for it to reach major, Category 3 hurricane strength before reaching the islands. Instead, forecasters say it is more likely that the wave would become a tropical depression by the end of the week or perhaps a tropical storm with sustained winds over 38 mph.

Buckingham explained that there will be a limited opportunity for the feature to strengthen, as it is likely to run into stronger wind shear over the Caribbean Islands.

The area of strongest wind shear, or disruptive winds in the atmosphere that deter tropical development, is forecast to shift east as the week progresses, running right into the path of the tropical feature.

Should the tropical wave and wind shear collide faster than anticipated, an organized tropical system may take longer or may not be able to develop at all.

A second candidate for tropical development through midweek was rather inconspicuous this past weekend but was on AccuWeather meteorologists' radar. "A surge in thunderstorms a couple of hundred miles north-northeast of Bermuda on Monday was a sign that a tropical system could quickly take shape," AccuWeather Senior Meteorologist Alex Sosnowski said.

"This system would likely have a short lifespan but could form on Tuesday or Wednesday, which would be just prior to the end of August in waters well east of the northeastern U.S.," Sosnowski said. "It is also possible for this system to develop and grab a name ahead of the tropical wave a thousand miles farther to the southeast over the central Atlantic." 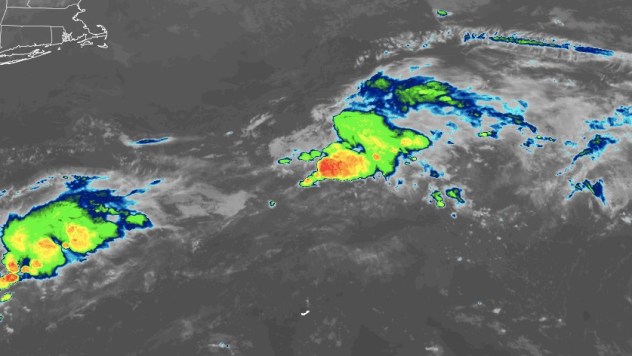 On this image captured on Monday, Aug. 29, 2022, thunderstorms can be seen erupting a couple of hundred miles to the north of Bermuda (lower center). (GOES-East/NOAA)

There is also the chance that a second system tries to develop perhaps less than 100 miles off the mid-Atlantic coast on Tuesday or Wednesday. Just like the system being watched north of Bermuda, it would also have a short life span.

Should a tropical system not develop until Thursday, this would be the first August to be void of named tropical storms in a quarter of a century.

"We’re only a few days away from this month becoming the third August ever to not have a named tropical system in the Atlantic basin," explained Buckingham.

Only two other seasons, since records began in 1960, have had an August void of tropical storms or hurricanes in the Atlantic Ocean: 1961 and 1997. Both seasons also did not observe a tropical depression during the month of August. 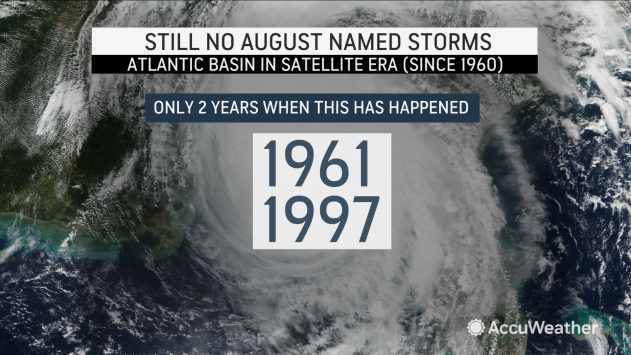 The two waves currently passing through the Atlantic's open waters could spoil reaching that record.

"It looks like September could really kick off an active period in the tropics. A steady wave train of energy rolling off Africa into the tropical Atlantic is expected to keep things active for a while across the Atlantic basin," warned Buckingham.