A whale belonging to one of the rarest species is 'likely to die,' after entanglement, NOAA says

The 4-year-old female right whale was found on the coast of North Carolina heavily entangled with several wraps of line around its mouth and tail, according to scientists. 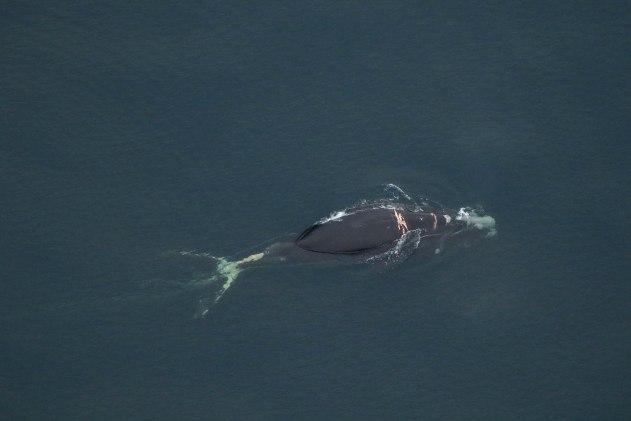 Scientists spotted North Atlantic right whale No. 4904 off the coast of North Carolina during an aerial survey on Jan. 8. (NOAA)

(CNN) -- The world's population of North Atlantic right whales has been decimated in recent years by human-caused vessel strikes and rope entanglements, and now another member of this rare species faces the same fate.

A 4-year-old female right whale found heavily entangled about 20 miles east of Rodanthe, North Carolina, is "likely to die," according to the fisheries division of the National Oceanic and Atmospheric Administration.

An aerial survey team from Florida's Clearwater Marine Aquarium spotted the whale January 8, noticing several wraps of line around its mouth and tail, and additional line trailing behind it. The entanglement has caused numerous wounds across the whale's body and allowed tiny parasitic crustaceans known as whale lice to thrive on its head, according to images NOAA Fisheries and its partners reviewed.

The division's biologists have preliminarily determined these details meet the criteria of a "serious injury," meaning the whale "is likely to die," NOAA said in a news release.

Scientists at the New England Aquarium, which manages the North Atlantic Right Whale Catalog tracking the identification and sighting history of right whales, identified the whale as No. 4904, the daughter of an adult female named Spindle (right whale No. 1204). Spindle was recently seen with a new calf off the coast of St. Catherines Island, Georgia. The last known sighting of No. 4904 was in May 2022 in Massachusetts Bay.

When No. 4904 was first spotted this month, entanglement response teams didn't "mount a response ... because it was too late in the day and the whale was too far from shore," NOAA said. "However, as conditions permit, NOAA Fisheries will work with authorized responders and trained experts to resight her. We will further document the entanglement, and determine if an entanglement response will be possible."

In 2017, NOAA Fisheries declared an "unusual mortality event" (UME) as the number of dead, injured or ill North Atlantic right whales in Canada and the United States began to rise — largely due to human interaction, specifically via vessel strikes and entanglements.

"This is more bad news for this species that has been suffering from many years of ineffective protection," said Gib Brogan, campaign director at Oceana, an international organization working to protect and restore the world's oceans. "To hear that there is another entanglement is frustrating, because we know that more needs to be done (to prevent it)."

Today, it's believed there are probably fewer than 350 right whales remaining worldwide. Right whales impacted by the UME represented 20% of their already endangered population — a significant setback to the recovery of an endangered species in which deaths are outpacing births, NOAA said. Additionally, only about a third of right whale deaths are documented, meaning the situation could be worse than what is known.

The potential death of No. 4904 could exacerbate the strain on the species. Female right whales can't reproduce until around age 10, and they bear one calf after a year-long pregnancy, according to NOAA.

The normal or healthy interval between right whale births is three years, but these days, the average is every six to 10 years — likely because of stress, insufficient food sources and ocean noise caused by human activities, according to NOAA. Ocean noise can harm right whales' ability to navigate, identify their surroundings, find food and mates, and detect and avoid predators and human hazards.

There are fewer than 100 known breeding females remaining. While the species would need to reproduce 50 or more calves per year over a period of multiple years to stop the decline and foster recovery, only 57 have been born since 2017. Only 15 right whale calves were spotted during the 2021-2022 calving season.

North Atlantic right whales' ill-fated encounters with humans didn't begin in 2017. By the early 1890s, commercial whalers had hunted them to the brink of extinction, according to NOAA. The species got its name from being the "right" whales to hunt, since they floated when killed. Whaling is no longer a threat due to a 1935 ban on the commercial hunting of North Atlantic right whales, but the species has never recovered to pre-whaling numbers.

And right whales' decline affects more than just their species.

If you see an entangled whale, "please do not intervene, and instead call the experts for the whale's sake as well as yours," NOAA said.

Whales can have an important but overlooked role in tackling the climate crisis, researchers say