Wintry conditions to sweep through western US in coming days

Fall started off dry for many in the West, but as the wet season nears, a change in the weather is set to bring rain, mountain snow and cooler conditions.

It's been a rather dry start to autumn across the western U.S. since mid-September. The dry conditions have spread from Seattle, which has received only 2.76 inches of rainfall or about 56% of normal, to Sacramento, California, where only 0.28 of an inch has fallen in the same time, a mere 31% of average.

All of Washington and over 99% of Oregon are experiencing at least 'abnormally dry' conditions according to the United States Drought Monitor's latest update. 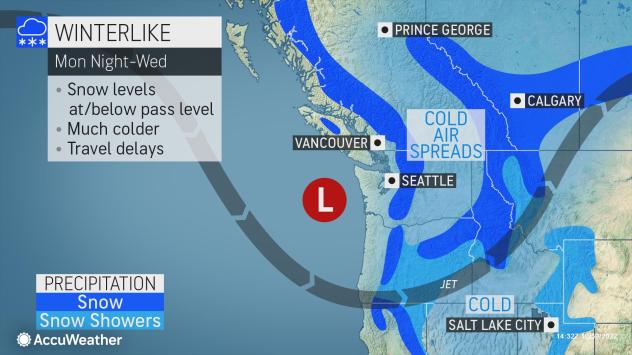 AccuWeather meteorologists say that a change in the weather pattern is forecast to bring an end to the abnormally dry conditions, starting with this next storm.

A dip in the jet stream will set the stage for wave after wave of storms to push through the area. By Tuesday, wet weather will overspread much of the region.

Rain is likely in many of the mountain passes until colder air arrives, but any hikers or campers should still be prepared for wet and cold conditions.

"After the initial wave of moisture, the incoming storm will open the door for a lot of colder air to flow into the region, allowing many places to have their lowest temperatures so far this season," said AccuWeather Meteorologist Haley Taylor. 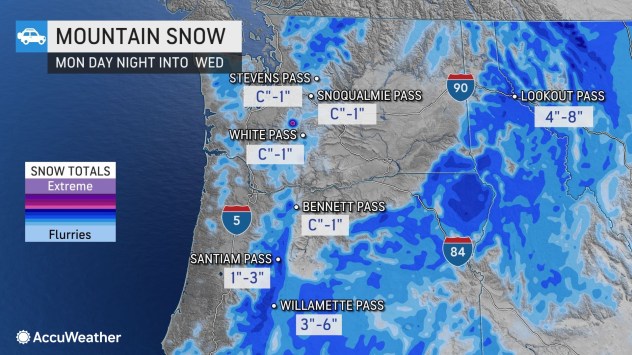 Taylor further explained that temperatures are likely to be 5-10 degrees below normal on Tuesday and Wednesday, and major cities like Seattle and Portland may struggle to reach the upper 40s.

Falling snow levels are expected through Wednesday across the western U.S., which will cause rain to change to snow in some of the mountainous terrain.

Snow is likely at and even slightly below pass level in Washington, making for tricky travel for motorists in those areas. Snow will be most widespread as colder air arrives Tuesday night.

"It is likely to snow hard for several hours by Tuesday evening at Donner Pass, along Interstate 80 in California," Houk explained. "Motorists should expect delays as roads are likely to become slippery and snow-covered for a time."

Snow will continue to spread southward over the Sierra Nevada and linger farther north over the mountain chain into Wednesday. 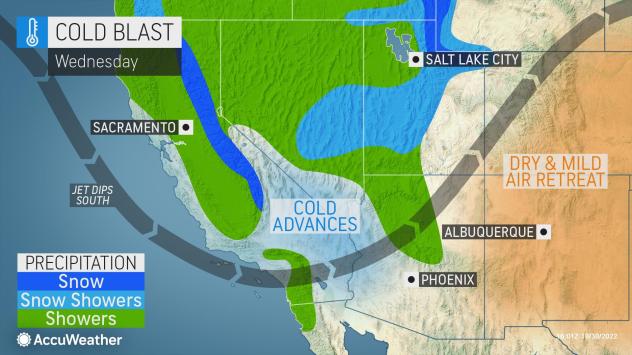 Whether precipitation falls as rain or snow, the influx of moisture will help to improve the stubborn drought across the region. Almost 100% of the state of California is in a moderate or worse drought, and 91% of the state is in a severe, extreme or exceptional drought. More than 40% of California is in the throes of extreme drought, so rain and mountain snow are desperately needed in the Golden State. 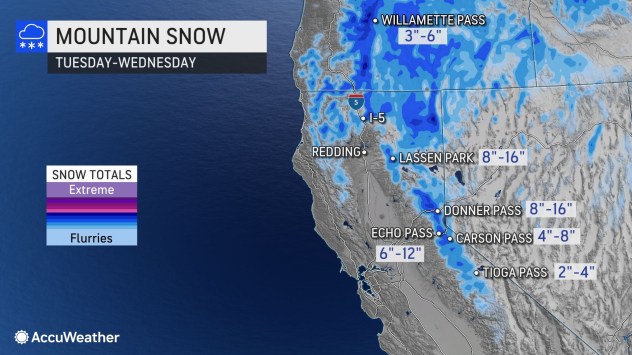 There are still some questions as to the exact trajectory of the moisture for the middle of the week, but at this time, the most likely scenario is for it to push into the central Rockies Wednesday and Thursday.

"Snow accumulations are likely to stay in the higher elevations of the Rockies, rather than in the major cities like Denver or Salt Lake City," said Taylor.

As much as half a foot of snow could fall in the foothills of Denver or Salt Lake City, while it is likely to be too warm in these downtown locations for more than a few flurries.

Even with the snow mostly in the higher elevations, it will be welcome for many. The snow will help with any lingering drought and bringing a beneficial wave of early-season snow for area ski resorts.

In Colorado, this snow would come on the heels of some wintry conditions from just a few days ago. Flakes were flying on Thursday across much of the state, and some locations had an inch of fresh snow coating non-paved surfaces as a disturbance brought the first measurable snow of the year for Denver. 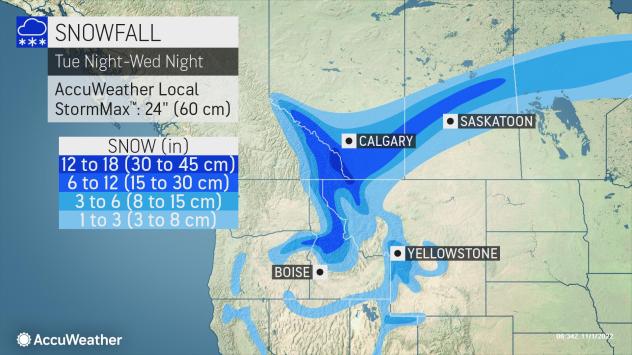 Heavy snow is forecast to develop over parts of northern Idaho and northwestern Montana on Tuesday night before pivoting to the northeast across the southern Canada Rockies and then the Canada Prairies in Alberta and Saskatchewan at midweek. A stripe of 6-12 inches (15-30 cm) of snow is forecast with higher amounts in some areas. An AccuWeather Local StormMax™ of 24 inches (60 cm) can occur with this storm. The major Canadian cities of Calgary and Saskatoon could be adversely affected by substantial snowfall.

AccuWeather's team of long-range meteorologists expects the ongoing cool and stormy pattern in the Northwest to last into the beginning of November. However, there are some indications that the jet stream will push northward during the first full week of November. If this occurs, the parade of storms will cease in the region.

The West is just beginning its traditional wet season, so there is the potential for much more rain and snow over the next few months. As long as heavy precipitation does not all come at once, the long-term benefits should outweigh any potential flooding, forecasters say.

2022's most ‘ghoulish’ sights on Earth and in space