Millions of people are watching and sharing videos of one woman’s practical preparation tips after her hellish experience in the Texas deep freeze last winter.

TikTok content creator Tiffany Holloway never understood doomsday preppers, thinking that preparing for an apocalyptic event was a bit silly. But after narrowly securing the resources to keep her family safe during the Texas February freeze, she has found ways to prepare for natural disasters and shares them across her TikTok platform.

From Wednesday, Feb. 11 into Saturday, Feb. 20, winter weather highlights totaling 8 days, 23 hours and 23 minutes of winter highlights, from winter weather advisories to hard freeze warnings, were recorded across an unprepared Texas. Hardly in an area where temperatures frequently dropped below freezing, the electric grid was ill-equipped for when temperatures crashed.

"I used to make fun of preppers for thinking that they're paranoid. And now I am one, and I'll never make fun of somebody like that ever again," Holloway said in one of her videos. 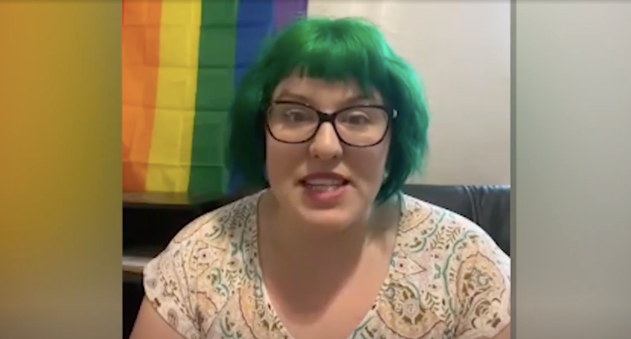 She had heard over the news that it was going to snow -- something that her three young children had grown excited over. When the cold first swept into Galveston, Texas, delivering the first few flakes, it stirred more excitement and intrigue as ice clung to the palm trees.

Then the power flickered out.

The Holloway family had been through power outages before during storms, so they knew what to look for at the grocery store -- bottles of water, flashlights, batteries and blankets. They got into the store with no issues, but upon leaving a line of people hoping to pick up supplies trailed around the store.

"It's like everybody got the same idea at the same time," Holloway told AccuWeather National Reporter Bill Wadell.

By the time they returned home, the temperature in their apartment had crashed to below 30 degrees. Galveston saw temperatures drop to 22 degrees F on Feb. 15, with some nearby maritime stations recording temperatures bottom out at 15 degrees over the weekend, according to the National Weather Service. 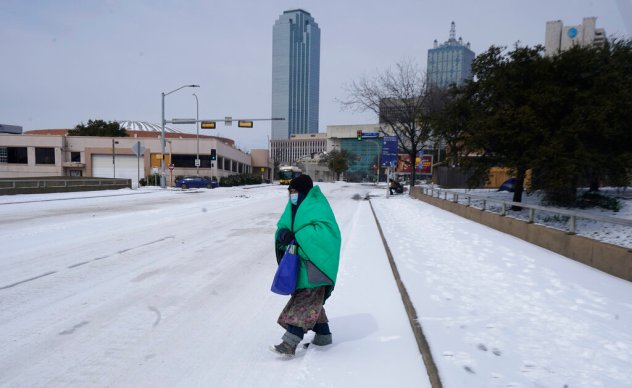 FILE - In this Feb. 16, 2021, file photo, a woman wrapped in a blanket crosses the street near downtown Dallas. As temperatures plunged and snow and ice coated the ground across the state, much of Texas' power grid collapsed, followed by its water systems. Tens of millions huddled in frigid homes that slowly grew colder or fled for safety. (AP Photo/LM Otero, File)

Having been living in a condo apartment at the time with glass walls facing the beach, there was little to no insulation from the wind coming off the ocean.

"The first night I thought 'We can do this,'" Holloway said. She had bundled the kids up in coats, boots and their sleeping bags, and they had some fun wearing the headlamps. But around 4 in the morning, Holloway woke up to find the apartment had grown cold enough to freeze the water bottle beside her bed completely solid. Realizing their home wouldn't be safe to stay in overnight, she rushed her kids to the car.

"To be honest, at that point I broke down and just started crying because I really didn't know what to do," Holloway said. "Almost every hotel had been already taken. There was just nothing available."

Hotels were packed during the winter outbreak as people sought warm shelter, the electric grid across the state neither equipped nor weatherized to handle all the hazards that the winter storm wrought. Eventually, though not without difficulty, Holloway was able to secure a room at Moody Gardens Resort Inn and Suites -- a luxury resort in Galveston. For $300 to $400 a night, she was able to shelter her family in the hotel for three days as well as her neighbor who she had found burning cardboard boxes in their apartment parking garage, trying to keep her infant baby warm. Hundreds of others weren't as lucky. 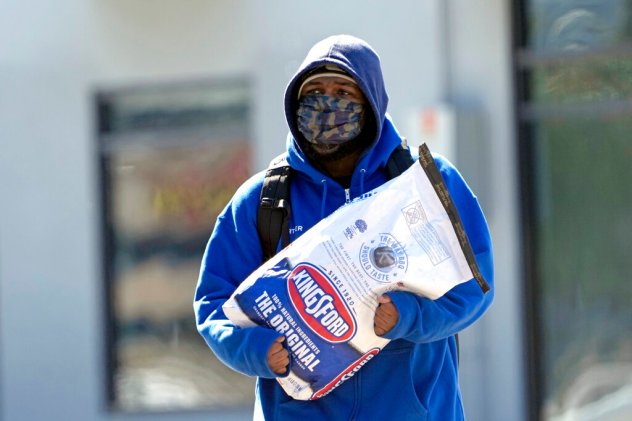 A man, who wished not to be identified, carries a bag of charcoal he planned to use to keep warm Tuesday, Feb. 16, 2021, in Houston. More than 4 million people in Texas had no power a full day after historic snowfall and single-digit temperatures created a surge of demand for electricity to warm up homes unaccustomed to such extreme lows, buckling the state's power grid and causing widespread blackouts. (AP Photo/David J. Phillip)

"There were hundreds of people outside of this hotel waiting to get in," Holloway said. "We sat in the lobby and they were able to get us a room, but there were many people that just came after me that were not able to get a room even if they had booked it because it just wasn't available."

The Texas Department of State Health Services updated the official death toll in July, claiming more than 200 people across the state died from hypothermia, carbon monoxide poisoning and car crashes on ice-slicked roads. Galveston saw at least 10 deaths, according to the state's count. Harris County, where Houston is located, saw the highest number of fatalities at 43 lives lost, followed by 38 lives in Travis County, which is home to Austin, and 20 in Dallas County.

Even the hotel Holloway stayed at wasn't completely removed from the impacts of the storm. While it still had lights and electricity, there was no water. Holloway recalled people at the resort carrying buckets down to the swimming pool just to return upstairs with pool water to flush the toilet.

"It was a real wake-up call for me, and I want to try and help other people to feel safe and secure," Holloway said.

Power returned to Holloway's home after five days, the water returning the following day. However, she and her family ended up leaving Texas two weeks following the storm, not wanting to face another winter freeze combined with a downed power grid. 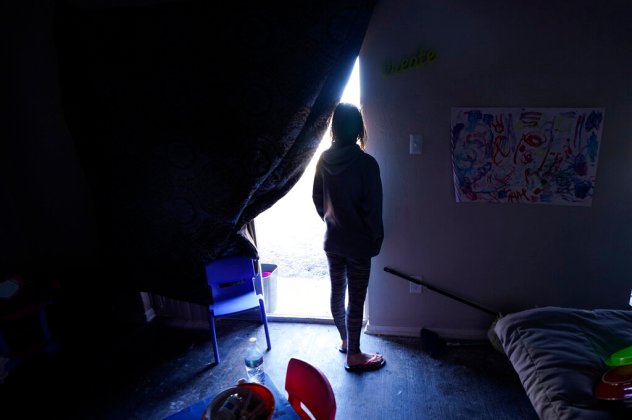 FILE - In this Feb. 23, 2021, file photo, Ricki Mills looks out from her home as she waits for a fire hydrant to be turned to get water, in Dallas on Feb. 23, 2021. Texas is again at high risk of power blackouts this winter because of extreme weather like the catastrophic February storm that buckled the state's electric grid and left millions of people without heat for days, regulators said Thursday, Nov. 18, 2021. (AP Photo/LM Otero, File)

While she doesn't live in Texas anymore, she still preps her household for the unexpected. She and her family have built a non-perishable pantry, and they have a large storage of water as well as a filter. Holloway also shares advice on how to prep over her platform on Tiktok, stressing the importance of prepping even outside of Texas with the weather disasters as of late from the Western wildfires with the smoke stretching across the nation to the heat wave in Oregon.

"Our planet is changing, and we need to be able to adapt to that," Holloway said. "So my reasons for prepping are very simple: it is better to be prepared than scared."

While the power and gas industries say they're working to make their systems more reliable during winter storms and the Public Utility Commission implemented the recommendations that had been made by federal regulators over a decade ago following another winter storm, energy experts say the state's grid is still vulnerable, The Texas Tribune reported. 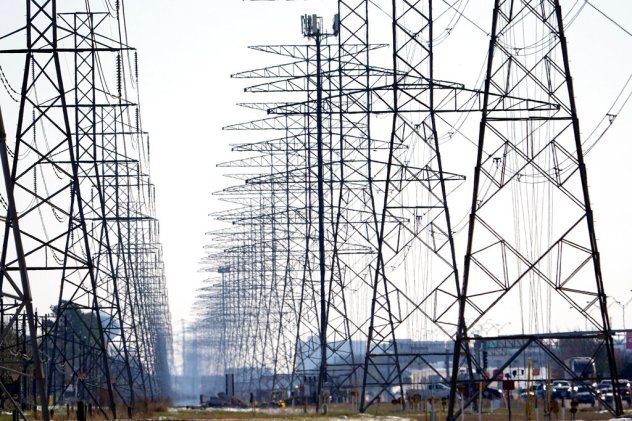 Power lines are shown Tuesday, Feb. 16, 2021, in Houston. More than 4 million people in Texas had no power a full day after historic snowfall and single-digit temperatures created a surge of demand for electricity to warm up homes unaccustomed to such extreme lows, buckling the state's power grid and causing widespread blackouts. (AP Photo/David J. Phillip)

One of the major concerns cited was that a lack of data from regulators and industry groups obscure just how many power and gas facilities are properly weatherized.

The new Texas Public Utility commissioners passed the new winterization standards for power plants and transmission providers in late October, the requirements going into effect as of Dec. 1. However, the language in the rules around enforcement is vague at best, granting violators a "reasonable amount of time to cure deficiencies." The Public Utility Commission also has not yet defined penalties or the range of fines for facilities that don't comply, KHOU 11 reported.

What's more, the new standards don't address the weatherization of natural gas facilities, which could prove to be the Achilles' heel in the system. Curt Morgan, CEO of power giant Vistra Corp., told The Texas Tribune that it had been the pinched supply of natural gas that had nearly brought the company's plants grinding to a halt.

"Why couldn't we get it?" the Tribune quoted Morgan as saying recently. "Because the gas system was not weatherized. And so we had natural gas producers that weren't producing."

The responsibility of regulating natural gas pipeline safety falls on the Texas Railroad Commission, and new rules are expected by March 2023, according to KHOU 11.

"The problem isn't whether or not bad weather will repeat," Holloway said. "It's that the grid is flawed and it's antiquated and it needs to be updated and I don't think that Texas is putting the necessary effort into upgrading it in a timely manner."

Correction: This story previously misstated the county in which Austin is located. Austin is situated in Travis County, not Harris County.