Old Man Winter is a man ahead of his time as he's dealing another round of wintry weather to a huge portion of the country more than 40 days before his season officially begins.

Icy conditions and accumulating snow continued spreading across the northeastern United States on Tuesday as a potent snowstorm pushes through the region.

The storm that brought snow to the Rockies and High Plains on Sunday will continue to sink south into the beginning of the week. This storm will bring some snow and Arctic cold to parts of the southern Plains.

After strengthening early on Monday, the storm shifted east and sent it snow from Missouri into the western Great Lakes.

Midway through Monday morning, the snow had already impacted millions in the Chicago area. According to ABC News, snow canceled roughly 1,200 flights in Chicago Monday and more than 1,500 nationwide as millions brace for a major temperature plunge.

By midday, the heaviest snow skirted into Michigan, Indiana and southern Illinois, dropping several inches of snow in just a few hours.

Precipitation started as rain across parts of the Ohio Valley; however, as Arctic air is pulled south on the backside of the storm, rain transitioned over to snow into Monday evening.

This precipitation change and snow falling across New York and parts of New England by the evening will bring along a mess of a morning commute to places like Buffalo and Syracuse, New York; Burlington, Vermont and Caribou, Maine.

Motorists across portions of Interstates 65, 69, 70, 71, 75, 80, 87 and 90 should exercise caution as snow falls. A heavier burst of snow, combined with the waning daylight, could reduce visibility.

Farther south, temperatures will be marginal, reducing the amount of time it will be cold enough for snow to fall from central Pennsylvania to southern Maine. 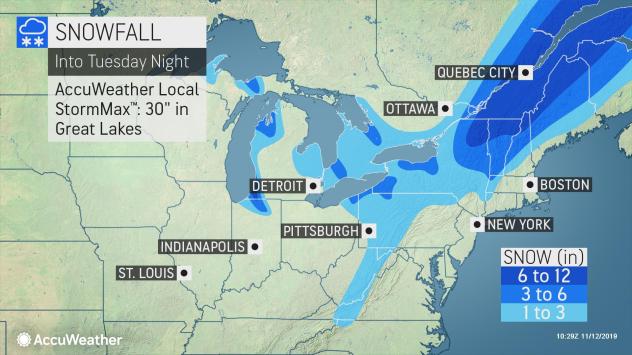 Widespread snowfall totals of 2 to 4 inches were observed across the Ohio Valley and into the Northeast Monday. Portions of the interior Northeast and New England are next in line for accumulating snow through Tuesday.

"We expect a swath of higher snowfall totals from central New York to northern Maine, where accumulations could climb into the double digits," said AccuWeather Meteorologist Courtney Travis.

On Tuesday, any wintry mix along the coast of Maine is expected to change over to snow, while snow will continue to fall elsewhere in northern New England. 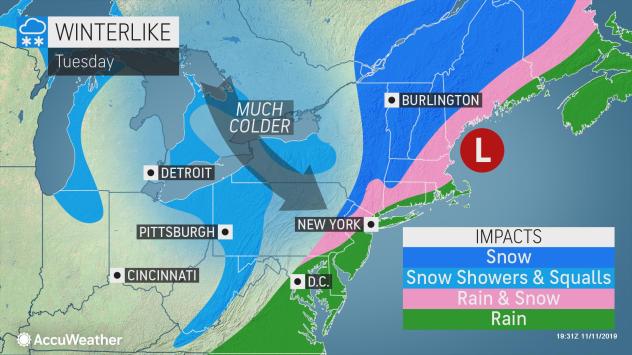 With snow expected across these areas for the duration of the storm, higher snowfall totals are anticipated.

"Mainly rain is predicted for the major I-95 cities from Washington, D.C., to Philadelphia and New York City; however, cold air may rush in and allow some flurries to develop at the end of the storm," added Travis.

Which places can expect another snowy winter? AccuWeather's winter forecast has the answer to this -- and much more
5 ways to prepare your car for winter
200 million Americans to experience harsh, record-challenging cold this week

In the wake of this storm, the next round of Arctic air will surge into the region into Wednesday.

Cold air rushing into the region over the warm water of the Great Lakes will trigger lake-effect snow showers that will continue through Tuesday night. 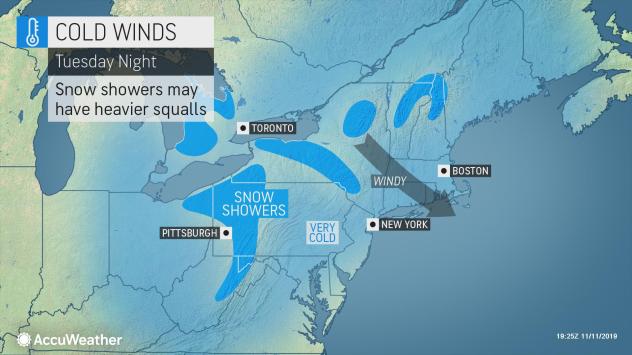 "The northwesterly wind direction should kick in by Tuesday morning, and lake-effect snow may be triggered downwind of Lake Huron, Lake Erie and perhaps Lake Ontario, adding to the snow that has already fallen in those areas," said Travis.

Snow can pile up to the south and east of the lakes, especially where persistent snow bands set up. Due to the duration of the lake-effect snow in parts of Michigan and northern Indiana, higher snow totals are expected there.

An AccuWeather Local StormMax™ of 30 inches is possible in this region where persistent lake-effect snow bands set up.

High pressure bringing the cold will shut off lake-effect snow by Wednesday morning and will promote dry conditions across the Northeast through the middle of the week. But, this same high will also usher in the coldest air so far this season. 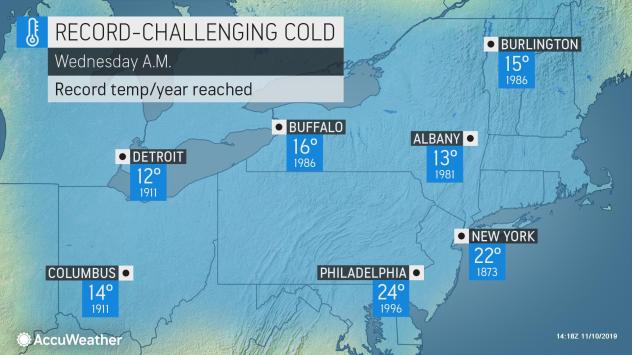 By Wednesday morning, temperatures look to fall into the teens across much of the region, nearing record-low temperatures across the area.

Download the free AccuWeather app to track the wintry weather headed for your area. Keep checking back for updates on AccuWeather.com and stay tuned to the AccuWeather Network on DirecTV, Frontier and Verizon Fios.