Hazardous travel conditions and power outages will result as blizzard conditions will develop in some areas, according to AccuWeather meteorologists.

See a photos recap of the snowstorm by clicking here.

Snow will continue to pile up and roadways will remain treacherous for travel as a storm unleashes an early winter blast in the northwestern United States through Sunday.

Winter weather advisories, winter storm warnings and/or high wind warnings were in effect for all five states in the northwestern United States as the snowstorm began to take shape on Saturday.

Forecasters warned that the early wintry blast could be "historic" for the Northwest and southern Canada due to the combination of heavy wet snow, strong winds and bitter cold expected. 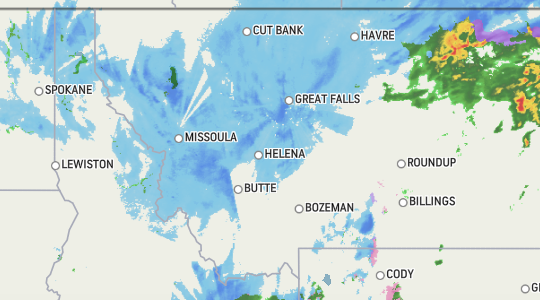 A look at the snow continuing to fall across the Northwest on Sunday morning.

Those in the high country and intermediate elevations will be at risk of becoming stranded and could be in a life-threatening situation during and after the storm, with below-freezing temperatures predicted.

Glacier National Park in Montana announced road closures ahead of the storm. While St. Mary Campground remains open, "camping not advised" signs have been put in place.

740AM: This photo was taken from the @MontanaDES Central District Field Officer ~7:30am near Browning on Hwy 2 with up to a foot of snow on the road. If you are caught outdoors or become stranded while traveling, this could become a life threatening situation. #mtwx pic.twitter.com/HPoZm1V1JI

Travel is not advised during the storm with snow likely along stretches of Canada Highway 1 and interstates 15 and 94. Anyone who does venture out may be at risk of becoming stranded. If you must travel, make sure you have a fully charged cellphone, blankets and an emergency kit in your vehicle.

Very difficult driving conditions were occurring on I-15 north of Great Falls, Montana, early Saturday morning, with snow-covered roads and blowing snow, according to the National Weather Service (NWS).

Road closures are possible due to the poor driving conditions, as well as the potential for strong winds to topple trees over the roadways.

"Stay home. Stay safe. Don't do anything silly," public information officer for the City of Butte-Silver Bow, Jason Parish, told AccuWeather ahead of the storm. 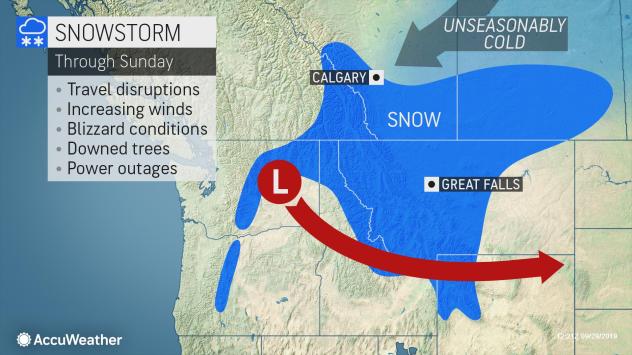 At times, the combination of wind and snow will make for very low visibility that can approach blizzard conditions, including in Glacier National Park.

In case you missed it: 1st week of fall featured earthquake swarms, flooding and chaotic lightning-lit nighttime footage
9 items to make braving snowstorms easier
How to survive a power outage in winter
What should you do if you are in a multi-vehicle pileup?

The combination of the strong winds and heavy, wet nature of the snow is threatening to bring down trees and power lines. Trees were already beginning to feel the weight of the snow early Saturday morning in Montana.

"It's a very big concern here; we're just beginning to turn our colors, so trees are fully loaded with foliage here," LeeAnn Allegretto, a meteorologist with the NWS in Missoula, told AccuWeather. "Snow will have a huge impact and will likely cause downed trees and potentially plenty of damage/power outages." 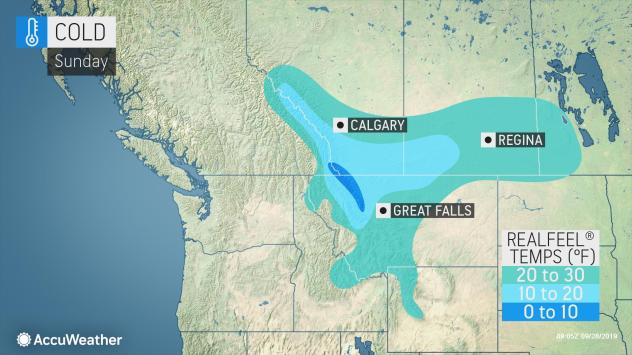 Residents who are left in the dark will face subfreezing temperatures with AccuWeather RealFeel® Temperatures approaching zero F in some areas. These bitterly cold conditions are expected to last for days after the storm.

The heaviest amount of snow, 2-3 feet (60-91 cm), with an AccuWeather Local StormMax™ of 65 inches (122 cm) is forecast along the east-facing slopes of the Sawtooth, Flathead and Lewis and Clark ranges in Montana.

However, a general 1-2 feet (30-60 cm) of snow will fall over the mountains with anywhere from a bit of slush to several inches of snow at low elevations. This includes some of the valley floors in central and eastern Montana and British Columbia and the High Plains and Prairies of Alberta and Saskatchewan. 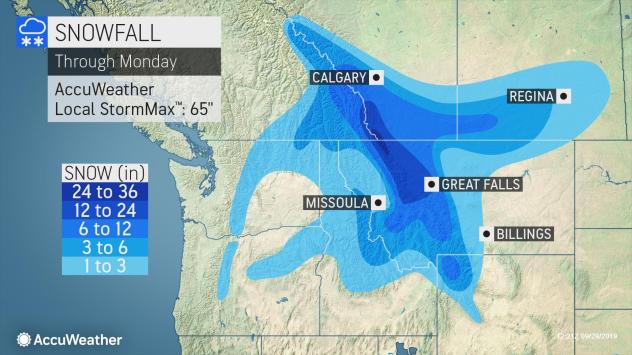 Up to a foot of snow (30 cm) is forecast to fall on parts of Yellowstone National Park in northwestern Wyoming and south-central Montana.

In Missoula, Montana, this event could turn out to be the greatest one-day September snowfall since 1934 when 1.5 inches (3.8 cm) fell. AccuWeather meteorologists are predicting 1-3 inches (3-8 cm) to fall on the city.

Several inches can also blanket portions of the Cascades, Bitterroots, and Blue Mountains.

The vast area of fresh snowcover will set the stage for record-challenging low temperatures early this week. 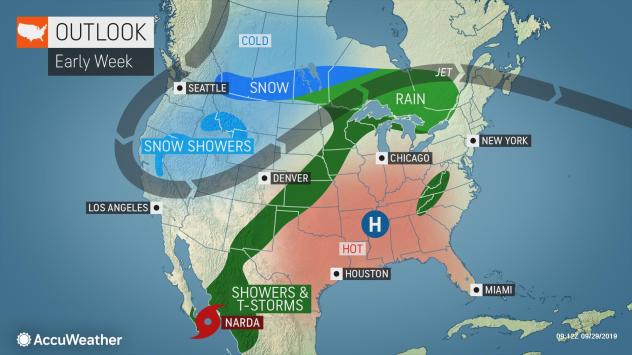 Temperatures are likely to dip into the single digits over the high country and the teens and 20s F over the intermediate elevations, to near or just below freezing over the High Plains and Prairies during Sunday night, Monday night and perhaps Tuesday night.

Meanwhile, drenching showers and locally gusty thunderstorms will pivot to the southeast of the snowstorm over parts of the Great Basin, central Plains and Upper Midwest into Monday.

Download the free AccuWeather app to stay aware of the latest forecast and winter storm warnings and advisories for your area. Keep checking back for updates on AccuWeather.com and stay tuned to the AccuWeather Network on DirecTV, Frontier and Verizon Fios.