AccuWeather predicted Florence would make landfall as a Category 1 or 2 hurricane, which it did, and cause between $30 and 60 billion in damage. We have narrowed our estimate of the total economic toll from Florence to $50-60 billion once all factors are considered such as damage to homes, cars, lost property and valuables in addition to lost wages, medical and other costs resulting from the inevitable disease and ill health effects that follow a storm of this nature. Flooding will persist for a couple of weeks in southeastern North Carolina, where rivers are yet to crest following record rainfall from Florence. Standing water can lead to infections, disease, exposure to mold as well as produce the breeding ground for mosquitoes and so many other ongoing hazards. 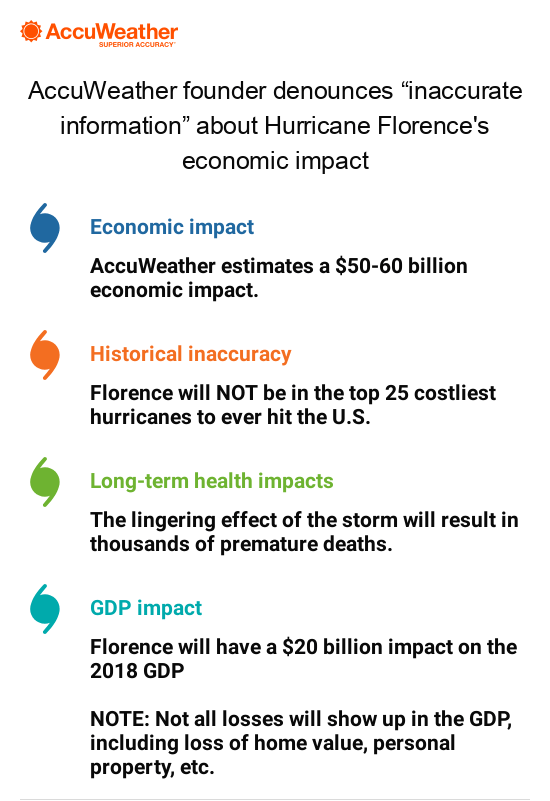 While Florence was in fact a major storm, it is important to put Florence’s impact into historical context, as we are seeing other sources counting Florence among the costliest hurricanes of all time in the United States. This is, as AccuWeather has said all along, not the case. Adjusting for inflation, I would not put Florence, although a formidable storm, in a list of the top 10 or even the top 25 costliest hurricanes to ever hit the U.S. as some news outlets are reporting. Hurricane Hazel in 1954 and many others caused more damage than Florence, when adjusted for inflation. To put the economic hit of Florence in further context, we correctly predicted the full extent of Hurricane Harvey’s economic damage to be $190 billion last year. Hurricane Harvey unleashed more than 60 inches of rain locally centered around the United States’ fourth largest city, Houston, which has a population of 2.3 million. For further context, we accurately estimated the total economic impact from Hurricane Irma would be $100 billion. Additionally, Florence’s projected toll is less than Hurricane Sandy's reported toll of $69 billion, which should likely be far higher when adjusted for inflation and factors not considered such as uninsured losses, in our opinion. It is also far less than Katrina's official cost of $161 billion, which we believe should ultimately be twice that amount.

Finally, it is important to ensure we are making apples-to-apples comparisons when estimating the overall negative impact of storms and hurricanes, including death tolls. While an in-depth analysis such as the George Washington study provides a greater understanding of premature deaths and indirect loss of life resultant from Hurricane Maria over a six-month period, we would have to do that kind of analysis for every storm to truly compare death tolls. Last year, Hurricane Harvey, for example, caused pools of standing, polluted water that remained for weeks and months and caused disease and other problems, and most likely resulted in not hundreds, but several thousands of premature deaths, but are not currently being counted as Harvey-related fatalities. These kinds of long-term negative health effects should be considered for all storms going forward. As we just heard last week such negative health impacts from the collapse of the twin towers far exceeded the official death toll. There are similar longer term negative on the population of areas hit by hurricane flooding and the time has come to estimate these for all storms. 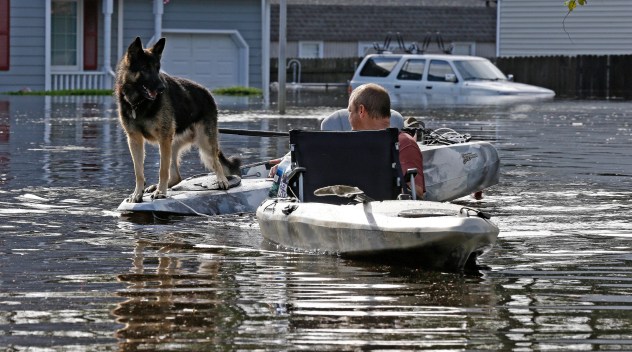 A man tries to get his dog out of a flooded neighborhood in Lumberton, North Carolina, Monday, Sept. 17, 2018, in the aftermath of Hurricane Florence. (AP Photo/Gerry Broome, File)

Further, we should celebrate the amazing progress we have made in weather forecasting. If Florence had hit 100 years ago, thousands of people would have already been killed due to lack of warnings. Remember, over 10,000 people died in the 1900 Galveston Hurricane, and that number does not include the thousands whose lives were shortened by disease and premature death due to mold and other hazards.