2017 Asia spring forecast: Winter to linger from Russia to Turkey; Drought may build in southern India

Spring will get off to a slow start over much of northern Asia and in part of the Middle East, while more typical conditions are in store for most areas farther to the south and east.

Meanwhile, drought conditions may worsen in southern India, while the potential exists for abnormally dry conditions in part of Southeast Asia. 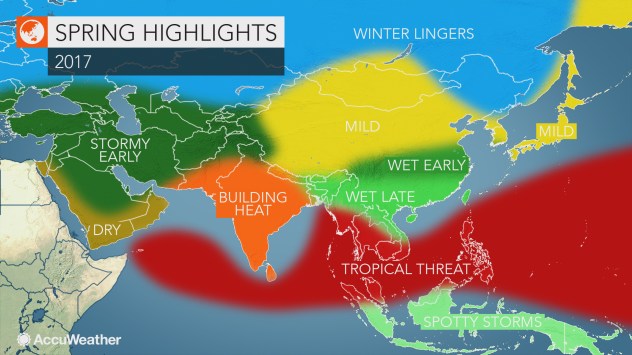 Wintry conditions may linger well into the spring over central Russia

March will feature a few waves of cold air west of the Urals and cold air will linger in much of far eastern Russia. After some back-and-forth warmth and chill, above-average warmth is likely during April and May.

An exception to a quick return of warmth in Russia is likely from near the Urals through western and central Siberia.

"The chilly pattern will feature multiple storms that can bring enough snow to disrupt travel in parts of central Russia," according to AccuWeather Lead International Meteorologist Jason Nicholls.

Stormy pattern to persist into April from Turkey to northern Pakistan

The stormy pattern that began during January will continue for a while longer over a large part the Middle East, especially over the mountains. 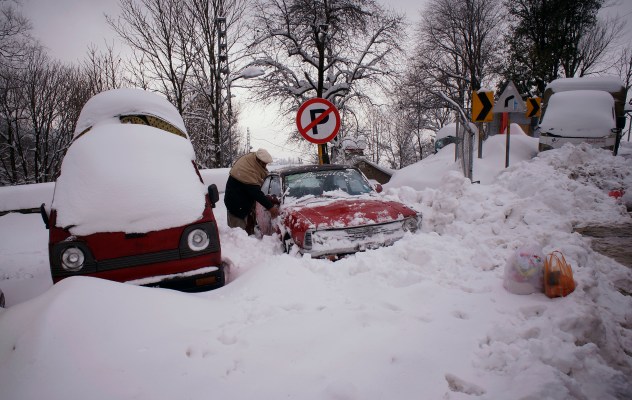 A man cleans snow from his car after a heavy snowfall in the hill town of Murree, some 58 kilometers (36 miles) northeast of Islamabad, Pakistan, Wednesday, Jan. 18, 2017. (AP Photo/B.K. Bangash)

Additional storms will bring locally heavy rain and mountain snow from Turkey and the northern Caucasus region of Georgia and southern Russia to the Hindu Kush during March and the first part of April.

"Heavy snow and fluctuating freezing levels can lead to the risk of avalanches over the rugged mountainous terrain," Nicholls said. "As this snow melts over the intermediate elevations, incidents of flash flooding can occur moving forward this spring."

Much of the southern and western part of the Arabian Peninsula will be dry as is typically the case during the spring. A couple of the stronger storms passing by to the north can kick up gusty winds and dust.

The frequency of these storms will diminish during the middle of April.

Drought conditions may continue to build over southern India

Spring is typically dry and hot over much of India ahead of the summer monsoon. This will be the case this year.

However, there are concerns for building drought, especially in the southern part of the nation.

"Very little rainfall occurred over southern India this past winter, following Tropical Cyclone Vardah that hit near Chennai from December," according to AccuWeather Meteorologist Adam Douty.

"Many reservoirs in southern India are running much lower than average," Nicholls said. "Should the monsoon only bring a limited amount of rainfall later this spring and summer, a serious problem with water supply could occur."

Tropical activity will peak during the middle of May over the Indian Ocean this spring, which is typical.

"One difference this spring, compared to last spring, is there may be a threat from a tropical cyclone or two in the Arabian Sea," Nicholls said. "Last spring there were no cyclones in this part of the Indian Ocean." 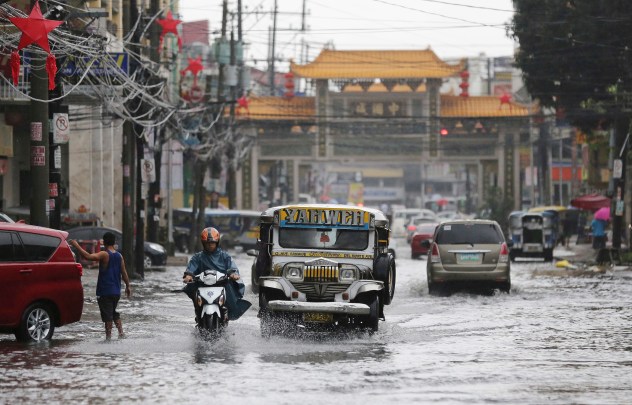 Over the western Pacific Basin, it is possible for a tropical system to impact some areas from the Philippines to the Gulf of Thailand at any time during the spring.

"Last year, the western Pacific typhoon season got off to a very slow start," Douty said. "We may have a couple of systems threatening land this spring."

Ample rainfall may diminish in part of Southeast Asia

Much of central and southwestern China, Japan and South Korea can expect above-average warmth and typical rainfall this spring.

A portion of the Yangtze River Basin in China will be wetter than average during March and perhaps into April. The pattern could be wet enough to cause flooding incidents.

Following a typical dry start, areas from eastern India and Bangladesh to Taiwan can expect some rain to return later this spring ahead of the monsoon.

Significant rainfall in the past year has marked an end to severe drought in a large part of Southeastern Asia.

"Conditions will remain favorable for sufficient rainfall in part of Southeast Asia this spring," Nicholls said. "However, rainfall could become more sporadic than average in some areas during May and beyond."

Malaysia and Indonesia will dry out later on in the season. Meanwhile, northern Vietnam, Laos and southeastern China will trend wetter as spring progresses.

If the rainfall from this summer's monsoon are lean, there is a chance part of Southeastern Asia may meander back toward drought conditions later in the year.