This July is the 75th anniversary of the Roswell Incident in 1947. On that fateful day, what was described as a "flying disc" crashed on a ranch near a military base at Roswell, New Mexico.

This July is the 75th anniversary of the "Roswell Incident" in 1947. On that fateful day, what was described as a "flying disc" crashed on a ranch near a military base at Roswell, New Mexico. The next day the Army recanted that story, saying it was actually a weather balloon. Evidence came forward in 2017 that it was likely a different kind of balloon, one for monitoring Soviet nuclear activity. 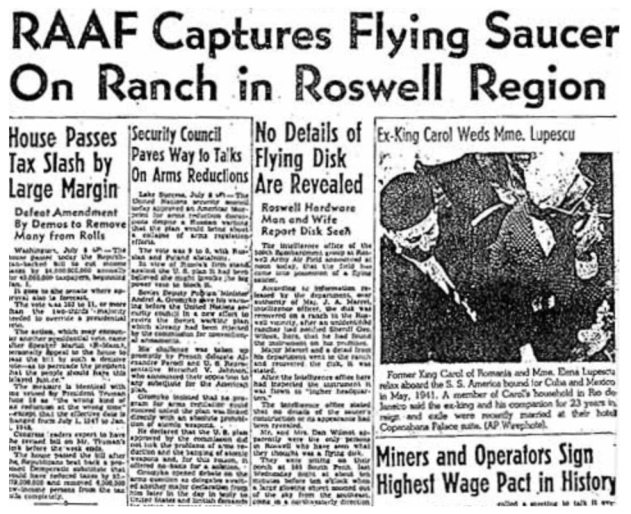 So what was the weather on that fateful day, July 8, 1947? It was fairly unremarkable, sunny with a high of 98 degrees F (airports took weather observations manually, so many stations did not report overnight). That was about 5 degrees above the normal high for mid-July.

There are many weather phenomena that do occasionally get reported as UFOs. In 2014, I gave a talk on this topic in Johnstown, Pennsylvania, which I later updated in 2015. In that talk, I talk about lenticular clouds, noctilucent clouds, hole-punch clouds, mothership clouds, rocket and missile trails, sprites / elves / jets, ball lightning, st. elmo's fire, lens and light reflections, light pillars, cryometeors, atmospheric reflections, other atmospheric optics such as bows, halos, weather balloons, chinese lanterns and quadcopters and similar drones. 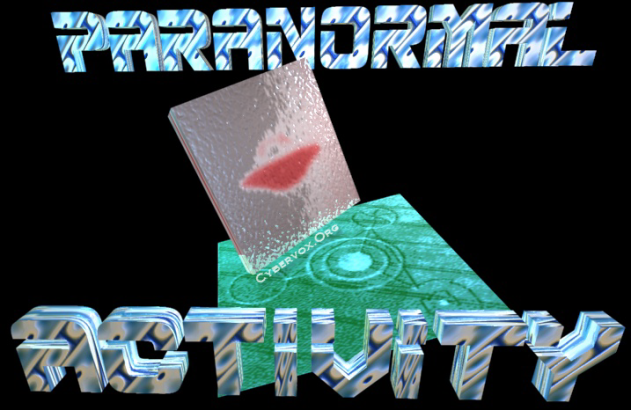 Since 2015, you can add in lots more drones, which I imagine are responsible for the majority of UFO reports these days, Space-X satellites, Google Loons and so much more. Our skies are more crowded than ever, and everybody has a cell phone to report sightings.

And yet, after seeing the latest James Webb Telescope images, which infer that there are 10 times more galaxies like ours in the universe than the Hubble telescope had revealed -- about 20 trillion (20,000,000,000,000), each with around 100 billion (100,000,000,000,000) stars, many stars with unknown numbers of planets rotating around them. What does that add up to? A number followed by too many zeroes for me to write here. The likelihood that we are alone in the universe is extremely low, if you ask me. Could any of them achieve space travel and have visited us? That's a lot less likely.

Over the years, aliens and UFOs have been featured in AccuWeather graphics, such as the "Worst Weather" cartoon shown above, that ran on AccuWeather.com in 2002.

In fact, in 2001, AccuWeather actually put up an "X-Forecast" web page (a bit of an "easter egg") that showed your local weather with an alien theme. It ran until the late 2000s. Here's what it looked like (parts were animated GIFs): 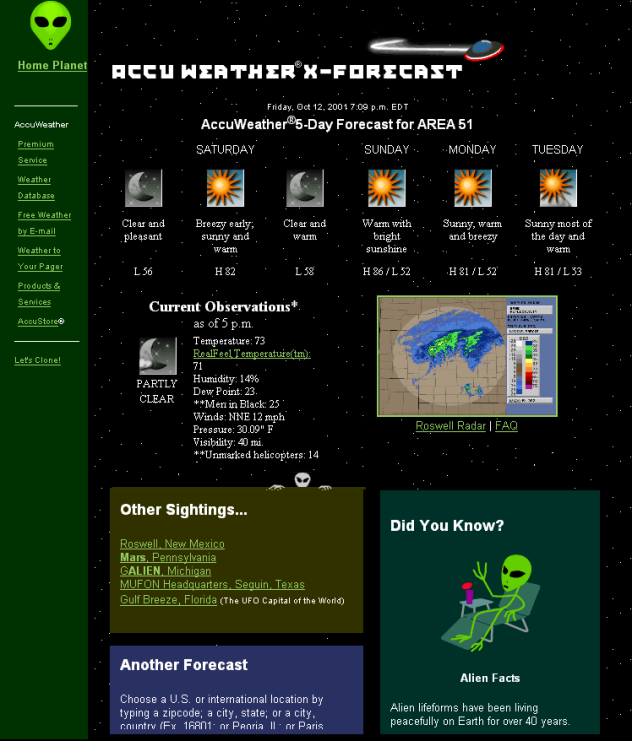