AccuWeather National Reporter Jonathan Petramala was in Buxton, N.C. on Wednesday, a town left inundated by sand after being lashed by a strong nor'easter over the weekend.

When folks across the eastern United States hear the term “nor’easter” they typically think of snow. But the recent storm that brushed the region’s coast left some thinking of a different word -- sand.

The brunt of the "no-name nor’easter," as some are calling it, focused on the coast of the Carolinas, particularly the Outer Banks.

“For much of the weekend, winds [were] gusting over 60 mph around Cape Hatteras, North Carolina, fueling massive waves that demolished dunes, exposing homes to the brutal surf,” AccuWeather National Weather Reporter Jonathan Petramala said during a report on the AccuWeather TV network.

The wind-whipped rain and large, crashing waves pummeled the coastline and left destructive consequences, including for areas that were recently slammed by Hurricane Dorian. 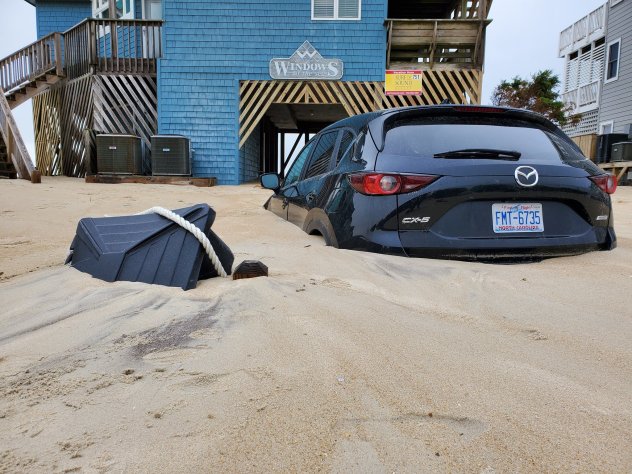 A car buried in 4 to 5 feet of sand in Avon, North Carolina, following the weekend nor'easter. (AccuWeather/Jonathan Petramala)

In the town Avon, North Carolina, a car was buried in about 4-5 feet of sand from one of the dunes, Petramala reported.

Nearby, a swimming pool was filled with sand, rather than water. It’s safe to say that it will be a while before people are swimming in this pool again. 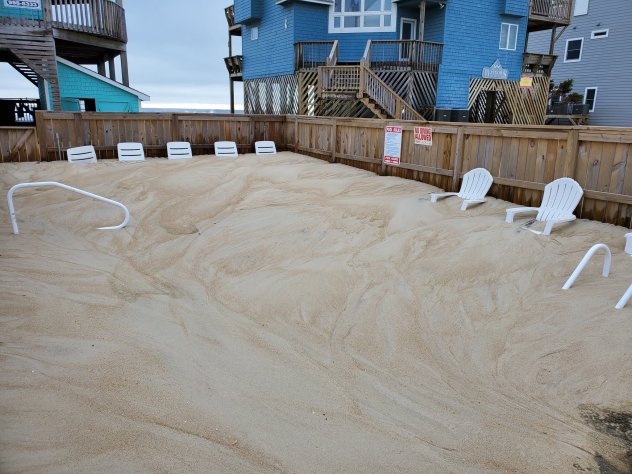 A swimming pool completely filled in my sand, rather than water in Avon, North Carolina. (AccuWeather/Jonathan Petramala)

“Those waves have closed Highway 12 since Saturday, the only north-south highway here in the Outer Banks, essentially trapping everyone from Rodanthe down into Hatteras, and also keeping visitors out,” Petramala said.

“People aren’t working this week, most of the restaurants are closed, that hurts everybody,” Robin Mills, an Outer Banks resident, told AccuWeather.

The North Carolina Department of Transportation painstakingly pushed back against the surf to plow all of the sand off of the highway, which eventually reopened on Wednesday afternoon.

However, not all of the sand dunes were destroyed during the nor’easter.

“It’s really striking, the section of dune where there’s vegetation stayed and those homes were protected. As soon as the vegetation was weaker, that’s where these waves really crashed through,” Petramala said. “Vegetation is really the key.” 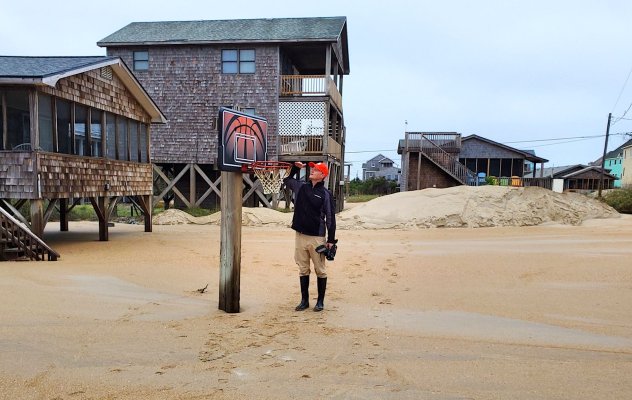 It is a bit easier to make a basket through this hoop after sand piled up during the weekend storm in Buxton, North Carolina. (AccuWeather/Jonathan Petramala)

“This is the third storm like this to batter the Outer Banks since September, and it’s getting expensive because, once again, property owners will need to dig out like they would for a blizzard,” Petramala said.

“Except for the blizzard, the snow melts,” Mills added.

This parade of storms that has battered the Outer Banks has left some homes in dangerous situations, facing potential destruction from future storms.

“[Homeowners] said just a few years ago, were separated from the ocean by a couple of dunes. Now at certain tides, high tide, they are completely exposed to the water, there’s a lot of concern,” Petramala said.

“Some of these homes are going to be collapsing into the sea, especially if you have some more of these nor’easters.”

And as AccuWeather Chief Broadcast Meteorologist Bernie Rayno pointed out, this may just be the beginning. "Unfortunately, the weather clock is ticking," Rayno said. "We're getting into the nor'easter time of the year. We've already had one. There's going to be more on the way."

Download the free AccuWeather app to see the exact forecast for your area. Keep checking back for updates on AccuWeather.com and stay tuned to the AccuWeather Network on DirecTV, Frontier and Verizon Fios.