Four endangered gorillas in a Ugandan national park were killed by a presumed lightning strike earlier this month, according to conservation groups from the area.

Among these gorillas were three females, one of whom was pregnant, and a newborn infant. The lightning strike that is believed to have killed the animals occurred on Feb. 3 at around midday while the group was taking shelter from a severe thunderstorm, according to a blog post by the Gorilla Doctors, a group of veterinarians and wildlife experts dedicated to preserving mountain gorillas in the region.

The group said a Mgahinga Gorilla National Park tracker who was nearby at the time of the incident was the first one to inform the Uganda Wildlife Authority of the fatalities.

The tracker reportedly felt a shock and heard the cries of the surviving gorillas, one of which is an orphaned one-year-old named Imbanzabigwi. Kabatwa, the infant's mother, died in the incident, the group said.

The Greater Virunga Transboundary Collaboration (GVTC) — the conservation group from the area who reported the incident — conducted a postmortem examination to confirm the exact cause of death of these gorillas.

"Based on the gross lesions from the postmortem, field assessment observation and history, the tentative cause of death for all four individuals is likely to be electrocution by lightning," the GVTC said in a statement released Saturday, adding that final confirmation of the cause of death could take about two to three weeks.

With just over 1,000 mountain gorillas alive today in Uganda, Rwanda and Congo, these silverback gorillas are considered to be one of the rarest of their species — which makes the loss of these four significant. 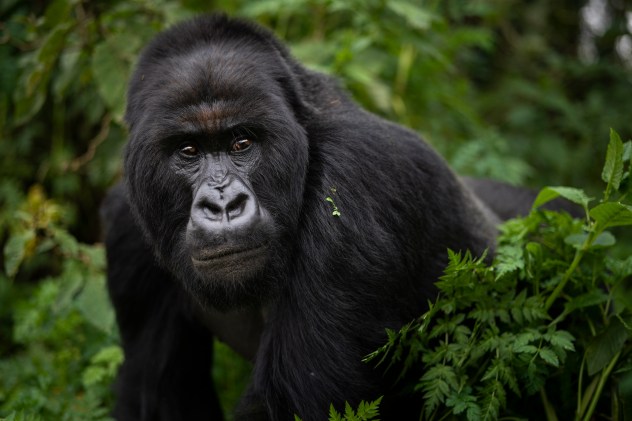 In this Sept. 2, 2019 photo, a silverback mountain gorilla named Segasira walks in the Volcanoes National Park, Rwanda. A concerted and sustained conservation campaign has averted the worst and given a second chance to these great apes, which share about 98% of human DNA. (AP Photo/Felipe Dana)

These four members were a part of a troop of 17 gorillas known as the Hirwa family, which had traveled from a national park in Rwanda. The state of the health of the remaining 13 members was unknown after the incident, which raised concern initially.

However, the Gorilla Doctors group was quick to release a statement saying that the remaining members of the Hirwa family were found “in general good health” approximately 650 feet from the site of the strike.

Doctors will continue to monitor the health of the gorillas that survived and will pay close attention to Imbanzabigwi; the infant was still breastfeeding and beginning a transition to eating leaves when his mother was killed.

The statement went on to say that the loss "is not only heartbreaking," but it could also have implications for the future population.

Although this incident might seem out of the ordinary, deaths caused by lightning strikes are common in many African countries, according to Colin Price, professor of Atmospheric Sciences at Tel Aviv University.

“Lightning is the No. 1 killer when we talk about weather in tropical countries,” Price told The New York Times.