50 million Americans at risk for next severe weather outbreak

After a short-lived break, the threat for severe thunderstorms will return on Tuesday to the southern Plains.

More severe thunderstorms, including the likelihood of tornadoes, are anticipated for the southern and central United States this week as 2020 continues on a trend to be among the top years for tornadoes.

Meteorologists have been monitoring a potent storm system pivoting from the Canada Rockies to the Mississippi Valley with eyes for the East Coast and the potential to ignite another outbreak of severe thunderstorms into Wednesday night. 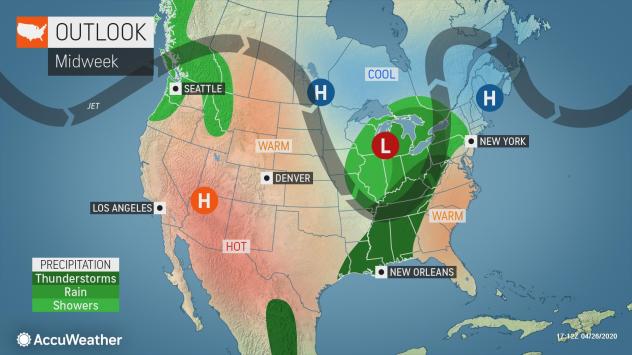 Nearly 50 million Americans live in the severe thunderstorm risk zone for the two-day outbreak. Those venturing outdoors or staying at home will need to closely monitor the weather situation for the potential for rapidly-changing and dangerous conditions.

Into Tuesday night, thunderstorms will extend along an approximate 1,100-mile swath from northern Illinois to central Texas and includes the full spectrum of severe weather ranging from large hail and flash flooding to damaging wind gusts and tornadoes. 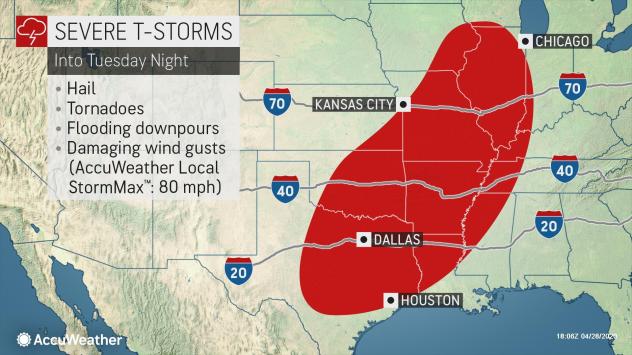 "One area to watch for tornadoes into Tuesday evening will stretch from northeastern Missouri to northern and central Illinois," AccuWeather reporter Blake Naftel said.

"There is a risk of a scattering of discrete storms erupting along a warm front and potentially evolving into severe, tornado-producers ahead of the main line of thunderstorms from the push of cooler air," he explained.

Another area that will need to be closely monitored through the evening hours will be in places like Oklahoma City and Tulsa. Explosive thunderstorm development will likely lead to a threat for very large hail, damaging wind gusts and even a tornado.

This includes stretches of Interstates 35, 40 and 44 in central and eastern Oklahoma.

"Into the late-night hours on Tuesday, it is quite possible that thunderstorms congeal into a massive line of damaging straight-line wind producing thunderstorms. This complex of thunderstorms will then blast southeastward into neighboring Arkansas, Louisiana and eastern Texas," according to AccuWeather Meteorologist Brandon Buckingham.

The line of storms is then expected to continue to feed on the very unstable atmospheric conditions in place across the South, allowing a severe threat to continue right into Wednesday morning.

"On Wednesday, the zone of severe thunderstorms, including the potential for tornadoes, is forecast to extend from part of the Ohio Valley to the central Gulf coast," AccuWeather Senior Meteorologist Brett Anderson said. 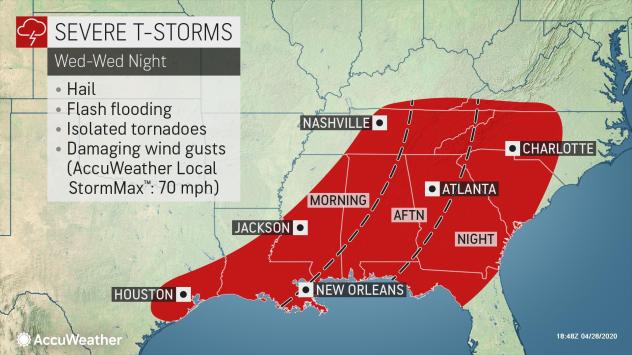 During the afternoon and evening hours on Wednesday, the risk of severe storms will extend from portions of the mid-South to southeastern Louisiana and the panhandles of Mississippi, Alabama and Florida.

During Wednesday night, the risk of severe thunderstorms will shift east of the Appalachians and increase along the southern Atlantic coast to the northeastern Gulf coast.

Farther northeast, where the air will be somewhat cooler, there can still be thunderstorms with heavy rain, localized flooding and gusty winds from the Upper Midwest at midweek to the central Appalachians, the mid-Atlantic coast and New England prior to the end of the week. 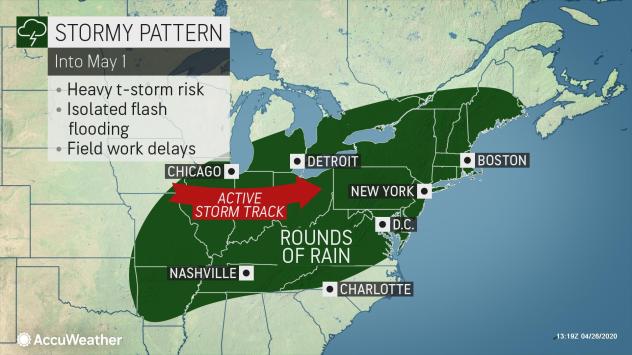 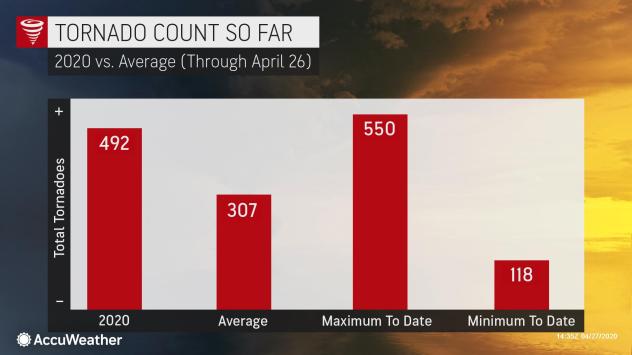 The number of tornadoes has surpassed the 75th percentile ranking and is closing in on the 90th percentile. The preliminary tornado report toll may change as investigation continues by the National Weather Service (NWS). 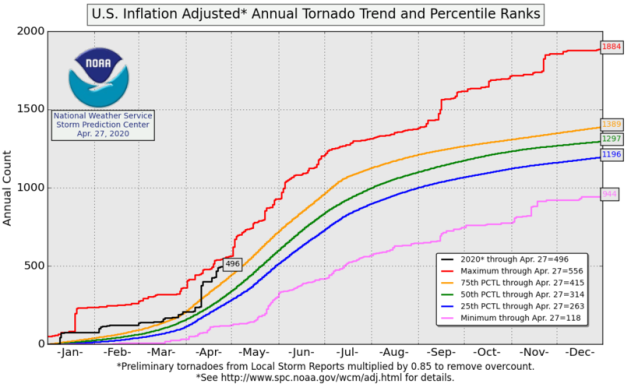 This compares to 553 fatalities in all of 2011, which was the second deadliest year for tornadoes on record. The most tornado-related deaths occurred in 1925, which was prior to the satellite and radar era.

During 1925, the Tri-State Tornado accounted for 695 fatalities alone. The March 18, 1925, twister was on the ground for 219 miles and traveled through the states of Missouri, Illinois and Indiana.

While there may be a bit more separation between major storms in the wake of the severe weather from Tuesday and Wednesday, additional systems will continue to move through every several days with new threats during May.

The path of the parent storm this week is somewhat different from the track of other storms that have unleashed severe weather so far this spring. Most storms have moved out of the southwestern U.S. or moved up from the Gulf of Mexico.

The direction from which the parent storm comes from matters little, but a stream of warm, moist air from the Gulf of Mexico is often a major contributor to severe weather outbreaks, and that parameter will be tapped by this storm system.

Another major role in severe weather is played by the jet stream. When the jet stream is strong, as it almost always is during the spring and early summer, thunderstorms get an added boost of intensity.