In what researchers are calling a scientific breakthrough, a new study may have found the biological reason -- and it all has to do with the nose.

Researchers have discovered that exposure to cold air can dramatically decrease the natural defenses your nose uses to battle viruses.

(CNN) -- A chill is in the air, and you all know what that means — it's time for cold and flu season, when it seems everyone you know is suddenly sneezing, sniffling or worse. It's almost as if those pesky cold and flu germs whirl in with the first blast of winter weather.

Yet germs are present year-round — just think back to your last summer cold. So why do people get more colds, flu and now Covid-19 when it's chilly outside?

In what researchers are calling a scientific breakthrough, scientists behind a new study may have found the biological reason we get more respiratory illnesses in winter. It turns out the cold air itself damages the immune response occurring in the nose.

"This is the first time that we have a biologic, molecular explanation regarding one factor of our innate immune response that appears to be limited by colder temperatures," said rhinologist Dr. Zara Patel, a professor of otolaryngology and head and neck surgery at Stanford University School of Medicine in California. She was not involved in the new study.

In fact, reducing the temperature inside the nose by as little as 9 degrees Fahrenheit (5 degrees Celsius) kills nearly 50% of the billions of virus and bacteria-fighting cells in the nostrils, according to the study published Tuesday in The Journal of Allergy and Clinical Immunology.

"Cold air is associated with increased viral infection because you've essentially lost half of your immunity just by that small drop in temperature," said rhinologist Dr. Benjamin Bleier, director of otolaryngology at Massachusetts Eye and Ear and an associate professor at Harvard Medical School in Boston.

"it's important to remember that these are in vitro studies, meaning that although it is using human tissue in the lab to study this immune response, it is not a study being carried out inside someone's actual nose," Patel said in an email. "Often the findings of in vitro studies are confirmed in vivo, but not always."

To understand why this occurs, Bleier and his team and coauthor Mansoor Amiji, who chairs the department of pharmaceutical sciences at Northeastern University in Boston, went on a scientific detective hunt.

A respiratory virus or bacteria invades the nose, the main point of entry into the body. Immediately, the front of the nose detects the germ, well before the back of the nose is aware of the intruder, the team discovered.

At that point, cells lining the nose immediately begin creating billions of simple copies of themselves called extracellular vesicles, or EV's.

"EV's can't divide like cells can, but they are like little mini versions of cells specifically designed to go and kill these viruses," Bleier said. "EV's act as decoys, so now when you inhale a virus, the virus sticks to these decoys instead of sticking to the cells." 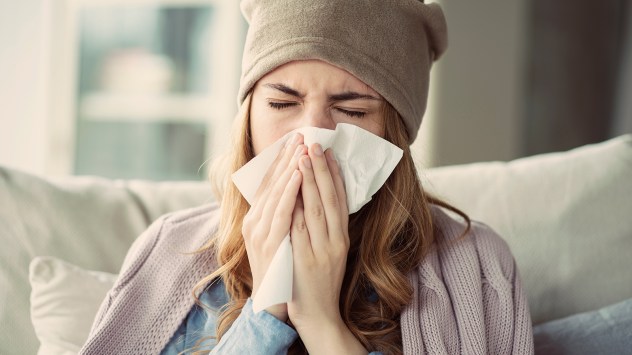 Scientists behind a new study may have found the biological reason we get more respiratory illnesses in winter and it turns out the cold air itself damages the immune response occurring in the nose. (sebra/Adobe Stock)

Those "Mini Me's" are then expelled by the cells into nasal mucus (yes, snot), where they stop invading germs before they can get to their destinations and multiply.

"This is one of, if not the only part of the immune system that leaves your body to go fight the bacteria and viruses before they actually get into your body," Bleier said.

Once created and dispersed out into nasal secretions, the billions of EV's then start to swarm the marauding germs, Bleier said.

"It's like if you kick a hornet's nest, what happens? You might see a few hornets flying around, but when you kick it, all of them all fly out of the nest to attack before that animal can get into the nest itself," he said. "That's the way the body mops up these inhaled viruses so they can never get into the cell in the first place."

A big increase in immune power

"Just imagine receptors as little arms that are sticking out, trying to grab on to the viral particles as you breathe them in," Bleier said. "And we found each vesicle has up to 20 times more receptors on the surface, making them super sticky."

So the nose comes to battle armed with some extra superpowers. But what happens to those advantages when cold weather hits?

To find out, Bleier and his team exposed four study participants to 15 minutes of 40-degree-Fahrenheit (4.4-degree-Celsius) temperatures, and then measured conditions inside their nasal cavities.

"What we found is that when you're exposed to cold air, the temperature in your nose can drop by as much as 9 degrees Fahrenheit. And that's enough to essentially knock out all three of those immune advantages that the nose has," Bleier said.

In fact, that little bit of coldness in the tip of the nose was enough to take nearly 42% of the extracellular vesicles out of the fight, Bleier said.

"Similarly, you have almost half the amount of those killer micro RNA's inside each vesicle, and you can have up to a 70% drop in the number of receptors on each vesicle, making them much less sticky," he said.

You don't have to wear a nose sock

As it turns out, the pandemic gave us exactly what we need to help fight off chilly air and keep our immunity high, Bleier said.

"Not only do masks protect you from the direct inhalation of viruses, but it's also like wearing a sweater on your nose," he said.

Patel agreed: "The warmer you can keep the intranasal environment, the better this innate immune defense mechanism will be able to work. Maybe yet another reason to wear masks!"

In the future, Bleier expects to see the development of topical nasal medications that build upon this scientific revelation. These new pharmaceuticals will "essentially fool the nose into thinking it has just seen a virus," he said.

"By having that exposure, you'll have all these extra hornets flying around in your mucous protecting you," he added.

Children's painkillers are in high demand as respiratory illnesses continue to rise
Flu season continues to intensify in the US, and holiday gatherings could make it worse
Cargo ship drew a crowd as it pulled up to dock encased in sea ice
Report a Typo