Spring will bring another season of severe drought to Colombia and Venezuela as little rain is forecast to fall in either nation.

Meanwhile, fairly typical rains are forecast across much of the rest of South America in the upcoming season, although their arrival may be later than normal in some regions. 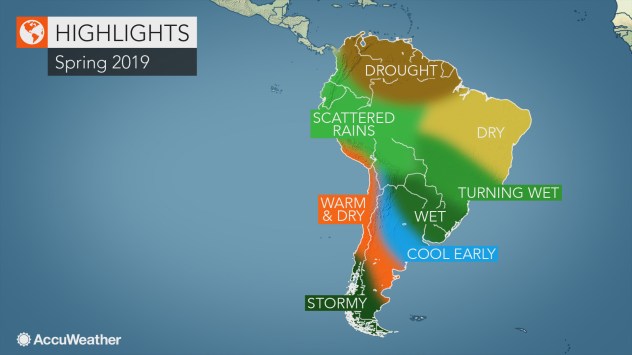 A wet season is on tap for much of southern Brazil, but the spring rains will be slow to advance northward, resulting in some dryness concerns across the north and northeast.

“We feel that Rio Grande Do Sul and Santa Catarina, Brazil, will be wetter than normal with temperatures close to normal,” AccuWeather Lead International Meteorologist Jason Nicholls said.

The onset of the spring rains will be delayed in areas north of here, including Parana, Sao Paulo and Mato Grosso Do Sul.

However, Nicholls explained that despite the drier start to the season, the amount of rain forecast during the second half of the spring should make up most of the early deficits.

“The more significant delays and dryness problems are expected from Bahia on northward to portions of Para and Maranhao and Rio Grand do Norte,” Nicholls said.

This dryness combined with above-normal temperatures may create some hardships for farmers across the region, forcing them to delay the planting of their summer crops.

It may also bring about some drought concerns to areas that are already drier than normal in 2019.

The severe drought across much of the northern extent of the continent will continue to worsen throughout the spring.

“No significant relief from ongoing drought conditions are expected from Colombia and Venezuela to French Guiana,” Nicholls said.

The areas currently facing the worst of the drought include southern Colombia and northeastern Venezuela, according to the Standardised Precipitation-Evapotranspiration Index.

In these areas, the drought will likely intensify further before beneficial rains return.

Meanwhile, areas to the south of the drought-stricken countries can anticipate regular bouts of rain.

“A fairly typical return to the rainy season is expected from Ecuador and Bolivia into Amazonas in Brazil with temperatures near to below normal,” Nicholls said.

“This wet pattern will spill into Paraguay and Uruguay as well as far northern Argentina,” he added. “The wet weather can lead to some planting delays, but most should be minor.”

A largely dry and warm spring is on tap for Chile and central Argentina as spring storms focus on the southernmost extent of the continent.

“A light early-season rain or mountain snow event is possible into central Chile, but overall the region will likely be milder than normal with no significant drought relief as precipitation continues to run below normal,” Nicholls said.

The dryness will extend across central Argentina, but northern parts of the country will experience a winter chill carry over into the first part of the new season.

“The Pampas of Argentina, including Buenos Aires, will continue to endure lingering cool weather [into the spring], but spells of warmer weather can become more frequent late in the season,” Nicholls said.

Ski resorts near Santiago, Chile, have resorted to using artificial snow as this winter continues to be unusually dry. Local reports indicate that this is the driest winter the area has seen in nearly six decades.

Storms are likely to slam into the southern extent of South America on a fairly regular basis.

“There can be frequent storms into southern Chile, mainly south of Concepcion, into far southern Argentina so these areas should be wetter than normal,” Nicholls said.

This could also spread some snow over the Andes, occasionally reaching into mountains of central Chile, particularly early in the season.

This will be to the benefit of any ski resorts planning to stay open late into the spring.