Christmas weather roundup: 2020 and past years

Here's a summary of the Christmas snow. Totals have now exceeded 30 inches!

Lake-effect snow amounts have not measured up to those from Christmas Week 2017 yet, but we have seen reports approaching two feet, and more is on the way.

Lake-effect snow has piled up, as high as 22 inches between Buffalo and Erie since Christmas Eve. Another 1-2 feet could fall. #Thundersnow currently northwest of Watertown, NY. #nywx pic.twitter.com/20Hvg8mIEL

Rivers are now peaking after the heavy rains, causing minor flooding in the Harrisburg area.

You can see the >12 foot rise on the Susquehanna River at Harrisburg on the Weatherbug cams (12/23 vs. 12/26) -- yards of houses at bottom of bridge cam flooded on 12/26. @NWSStateCollege @TOMRUSSELLCBS21 @stormsellwx @SteveSeman pic.twitter.com/pM9zne6I9S

Some minor flooding along the Swatara Creek in Middletown, PA today, about 2.5 feet above flood stage. #pawx pic.twitter.com/iPNDawz6jl

Mount Mitchell, NC fell below zero, making for the coldest Christmas since 1983.

Here's all 3 days of our Christmas cold blast in Western NC rolled into a 10 second GIF! The temperature on Christmas afternoon peaked at 2.8°F atop Mt Mitchell before falling back into the negatives, making it the coldest Christmas since 1983 #NCwx pic.twitter.com/K3DN88aKo0

Our story "Storm produces white Christmas, power outages in East" details the weather on Christmas, including 300,000 customers who lost power, those who were flooded, people who got snow, and those who experienced extreme temperatures. Here's what the weather maps looked like Christmas morning: 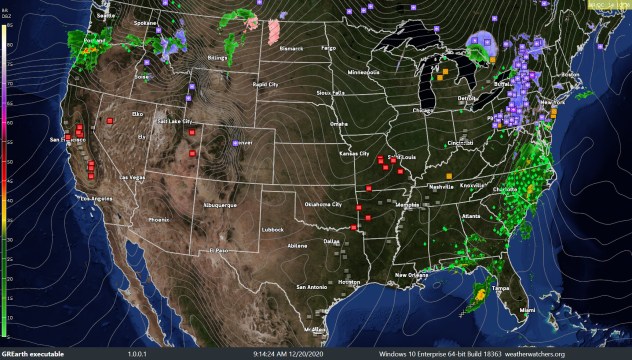 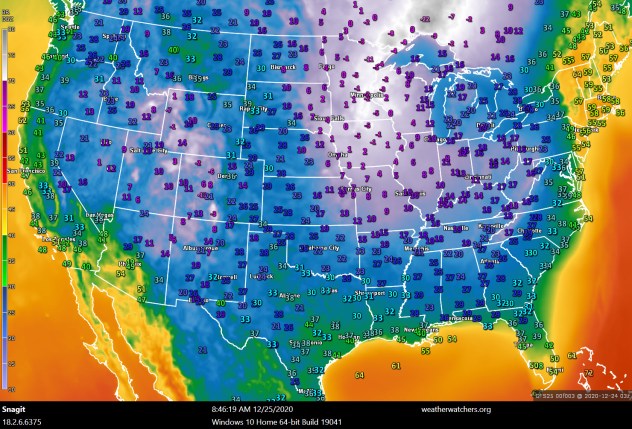 Temperatures mid-morning ranged from 64 in Massachusetts to 12 in Maryland as the massive cold front plowed through. The Midwest experienced temperatures in the negative teens, with wind chills as low as the -30s.

Temperatures mid-morning ranged from 64 in Massachusetts to 12 in Maryland #Christmas pic.twitter.com/mqk3xKHEps

Temperatures ranged from 27 to 70 degrees in North Carolina on Christmas Eve:

At 9 PM, temperatures in North Carolina ranged from 70 F at Wilmington to 27 in Boone. pic.twitter.com/Fd7ljx3ViT

Christmas Eve and Christmas Day 2020 are going to be a weather nightmare in the Northeast. 80-mph winds will cause regional power outages to an area containing 40 million people, usher in heavy rain which will cause flooding as existing snow melts, and be followed by a rapid freeze-up which will flash-freeze roads on Christmas Eve. 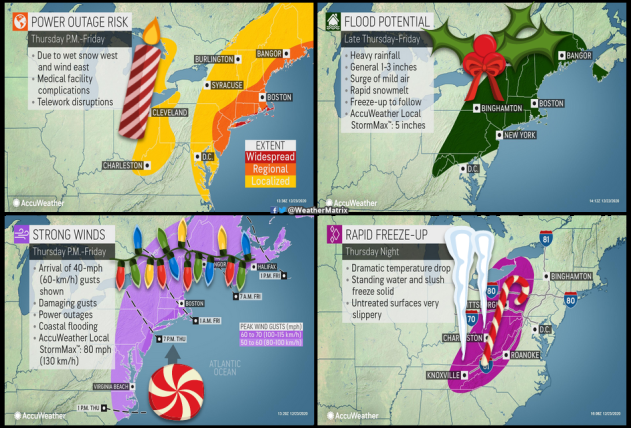 Oh! And I forgot the severe weather on Christmas Eve on the southeast coast, where 3 million people are under an SPC "Enhanced" risk for severe thunderstorms! 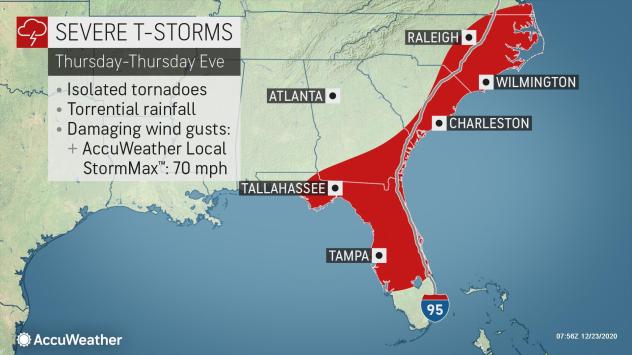 It is a chaotic end to a chaotic 2020. By December 25, the storm will still be ongoing in New England in the morning, and another storm will be hitting the Pacific Northwest, but most of the country will be dry, with cold in the East. 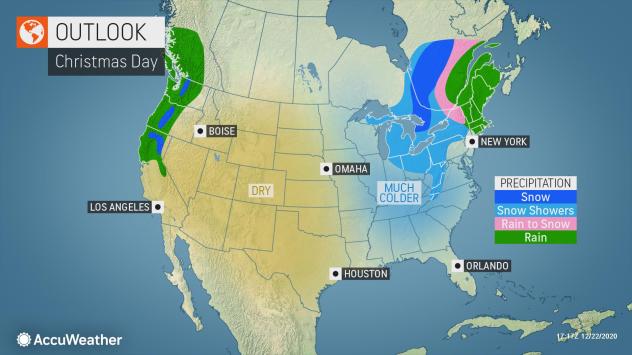 A blockbuster snowstorm last week might lead to a White Christmas -- officially, an inch of snow or more on the ground -- in much of New England. Fresh snow will fall today, Dec. 23, in the Midwest and on Christmas Eve in the Ohio Valley and down the spine of the Appalachians, bringing a White Christmas to some areas that don't usually see one, including eastern Tennessee, Kentucky, and the highest elevations of North Carolina. 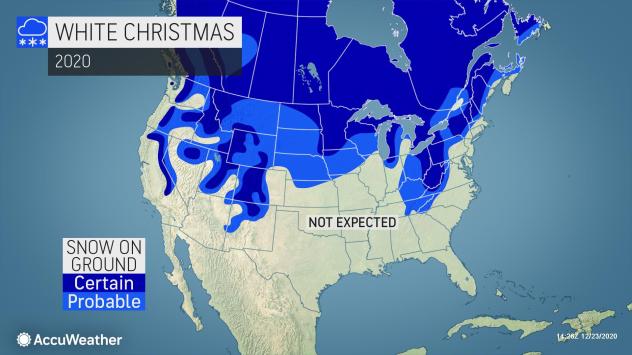 Temperatures are going to be way over normal (orange/red) on Christmas Eve day, although it depends where you are when the front comes through. Christmas Day`s temperatures are off the charts compared to normal in New England, but that's only in the morning before the front passes. The Ohio Valley and Southeast will be unusually cold, 10-20 degrees colder than they should be on Christmas Day, but in most places it won't rank in the Top 10 coldest Christmases. 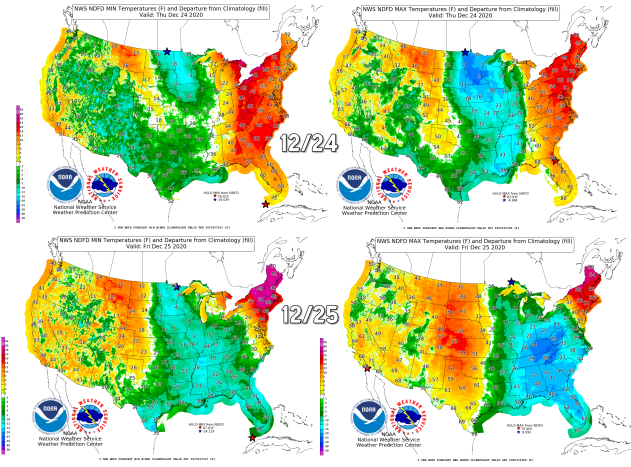 As an example of what the front will do as it passes, we are forecasting 79 degrees in Jacksonville, Florida on the afternoon of Dec. 24th, but 38 degrees by Christmas morning.

Looking back at past years' Christmases, here are some highlights:

Christmas 1988 was apparently icy in Bradford, Pennsylvania, according to this early computer graphic from AccuWeather (part of an "AccuHistory" video): 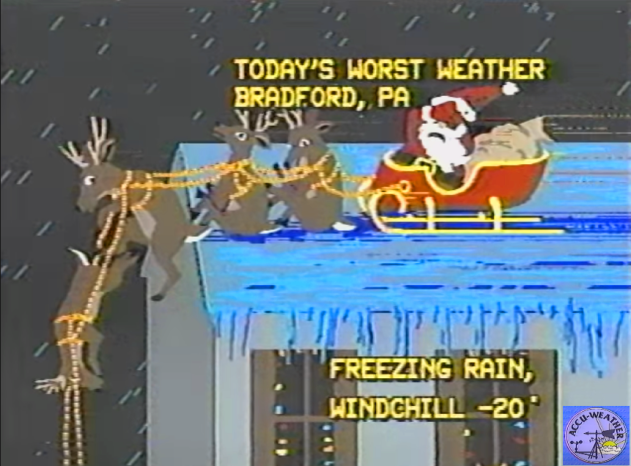 AccuWeather
Report a Typo
Comments that don't add to the conversation may be automatically or manually removed by Facebook or AccuWeather. Profanity, personal attacks, and spam will not be tolerated.
Comments
Hide Comments