This time-lapse video taken on March 22 near Dighton, Kansas, was just recently shared. The colors and cloud formations are simply breathtaking.

A weather pattern conducive for gusty winds will put portions of the southern Rockies and adjacent High Plains of the United States at an elevated risk of wildfires much of this week.

Windy and dry days become increasingly common across this region during this time of year, but a weather pattern will boost both these conditions in the coming days.

A large southward dip in the jet stream is forecast to pivot slowly from the Northwest coast to the Four Corners region this week. At the same time, winds in the lowest levels of the atmosphere will tend to line up with winds aloft. This pattern can allow stiff winds to work down to the surface. 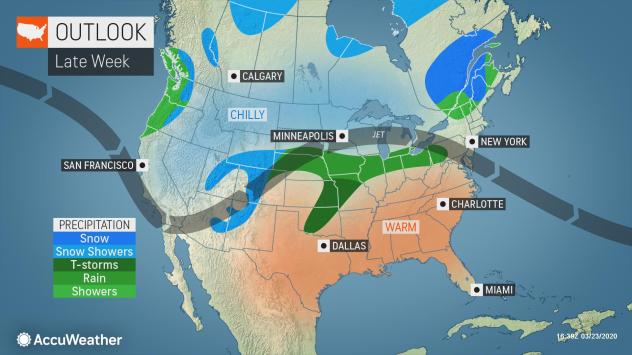 Winds are forecast to average 15-30 mph over the interior Southwest. An AccuWeather Local StormMax™ gust of 50 mph is anticipated.

Areas from Utah and Arizona to portions of Colorado, New Mexico, Texas, Oklahoma and Kansas have experienced a lack of precipitation this winter. 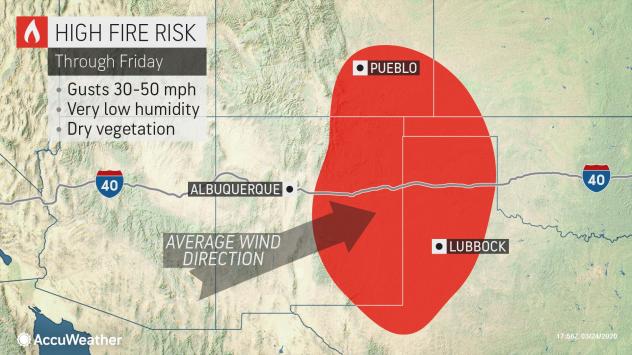 This condition has resulted in abnormally dry to extreme short-term drought conditions in some cases, according to the United States Drought Monitor.

Areas where brush has not greened up just yet are especially prone to wildfires early in the spring.

Building warmth over the region can push the risk beyond elevated levels to critical this week. 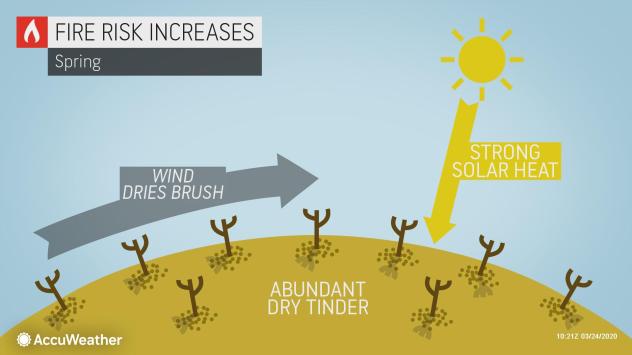 "As the temperature climbs well into the 60s, 70s and even the 80s F, the relative humidity will plummet into the teens and perhaps the single digits each afternoon through Friday," AccuWeather Senior Meteorologist Brett Anderson said.

The gusty winds can cause any fire that ignites to grow rapidly in size and move along at a swift pace. Officials say it's important to promptly report fires to local authorities to help minimize the spread of the blazes.

Wildfires, although not common over the southern Plains, tend to occur most often during March.

There have been substantial wildfires during this month over the past several years over the southern Plains, including in 2018, 2017 and 2016. 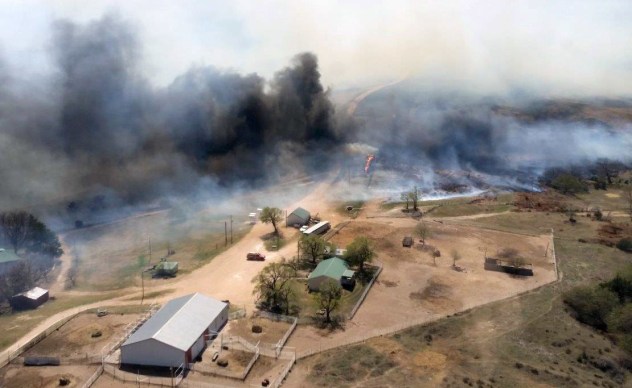 Forecasters recommend avoiding the use of power equipment and outdoor flames in the conditions. Parking a vehicle over high, dry brush can start a fire.

"To reduce the risk of flying embers igniting structures on fire, property owners should try to clear dried up leaves and dead vegetation from under and on decks, gutters and eaves and probably anything within 10 feet of the home during periods of high wildfire risk," Anderson said.

"Pockets of blowing dust may also be an issue for some motorists, especially over northeastern New Mexico, extreme western Oklahoma and southeastern Colorado as those areas are currently under drought conditions," Anderson said.

Travel along stretches of I-25 may be difficult at times due to strong, crosswind gusts as the highway mostly runs perpendicular to the prevailing west to southwest winds.

Dry conditions likely prevail into the weekend, but the winds should ease up, which should reduce the wildfire ignition risk.