Air quality levels have improved in cities around the globe, but experts believe pollution from trucks and power plants is still a major concern.

Air pollution in the skies over some of the world's most crowded places has cleared significantly at the same time strict shelter-in-place orders have been implemented around the globe in response to the COVID-19 crisis. However, air quality experts say the improvements that are being observed aren't significant enough to make much of a long-term impact.

"This has not cut the amount of emissions and pollution by any amount that would be sufficient to significantly dampen the amounts of deaths and shorter lives that air pollution represents," Romain Lacombe, founder and CEO of Plume Labs, an environmental technology company that maps out pollution levels around the world, told AccuWeather in a Skype interview. "We're talking about 7 to 9 million deaths worldwide every year based on our best statistical understanding of how pollution impacts our health."

Data from the newly-released "State of the Air" 2020 report by the American Lung Association noted that this was the fourth report that marked downward trends in air quality compared to previous years.

"Nearly five in 10 people -- 150 million Americans or approximately 45.8 percent of the population -- live in counties with unhealthy ozone or particle pollution," the report said.

Ground ozone is a pollutant that stems from other pollutants interacting with UV rays and is known to be harmful to lungs and to trigger asthma crises.

According to Lacombe, a cut in transportation due to the lockdowns might not have been enough to cause even as much as an impact as the world has seen.

"What it means at the end of the day is that we cannot say for sure that the improvement comes from the lockdown as much as we want that to be the silver lining here or at least a part of the aspect among the hardships that we're going through," Lacombe said. "It could very well be completely caused by those changes in weather and a spring that has been more rainier than usual. And you see that story happening again and again in parts of the world." 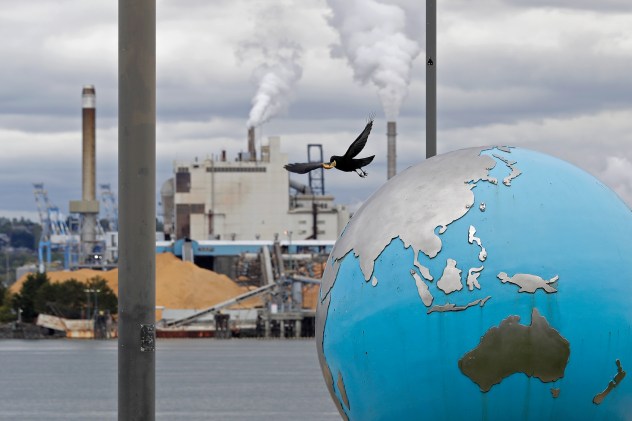 In this April 21, 2020 photo, a bird takes off from an Earth globe sculpture at Thea's Park in Tacoma, Wash., with the WestRock Paper Mill in the background. Wednesday is the 50th anniversary of Earth Day, an observance that helped spur activism against air and water pollution and disappearing plants and animals, but ongoing challenges remain throughout the world. (AP Photo/Ted S. Warren)

Satellite imaging and data have shown the air pollution levels to be ebbing away amid not just lockdowns and shelter-at-home orders but also rainier weather with the transition to spring. The data focused specifically on the concentration of the pollutant Nitrogen Dioxide (NO2). Lacombe described the pollutant as having a "very recognizable smell that's pretty much what you smell behind a bus or a truck that's idling."

Generating energy from burning fossil fuels leads to an emission of NO2 from the smokestacks. As such, the pollutant can be used to indicate human activity. NO2 also "has an impact on the chemistry of the air," Lacombe said, "meaning that you can see spikes in the other pollutants, specifically ozone," as NO2 levels rise.

During the month of March, NASA satellite data measured NO2 levels around New York City using the Ozone Monitoring Instrument (OMI), which is part of NASA's Aura satellite. Usually during March, NO2 levels of around 10.0 (10¹⁶ molecules/cm²) from New York City expand out as far as 25 miles, seeping into areas as far away as Morristown, New Jersey. However, the data found that the NO2 levels during March 2020, when lockdown orders were in place, had ebbed back, barely reaching the New Jersey border. Morristown, which is about a 33-mile drive from midtown Manhattan, had NO2 levels around 6.0.

Other major cities in the Northeast that had significant drops in NO2 levels include Cleveland, Detroit, Buffalo and Pittsburgh. The I-95 corridor between Washington, D.C., and Boston had a 30% decrease in NO2 levels in March 2020 compared to the 2015-2019 March average. The corridor includes cities such as Baltimore, Philadelphia, Cambridge and Providence.

Of these cities, Detroit, Buffalo, Pittsburgh, Providence, and Washington, D.C., received above-average rainfall from Feb. 1 to April 21, with Pittsburgh receiving 137% of its usual rainfall with 10.42 inches compared to the normal of 7.61 inches. The city with the lowest amount of rainfall was Morristown, New Jersey, which got 70% of its normal rainfall within this time period.

On the West Coast, even though the air has cleared of some smog, Los Angeles has reported increases in NO2 levels. Industries and factories continue to churn out emissions in the United States, delivery trucks continue distributing goods on mostly clear roads. However, even with the smaller cars off the roads, their absence doesn't make as much of an impact as they make up only about 11% of emissions overall, according to Lacombe.

"What's been interesting is we've seen very blue skies and very clear sights in Los Angeles, but some of these conditions had happened before the lockdown itself," Lacombe said, also linking cleaner air to weather factors such as wind and rain.

"When there is precipitation like this, it will have an impact on particulate level matter levels," Lacombe said. "It also tends to absorb nitrogen dioxide levels. So long story short, when it rains, there's less pollution."

Los Angeles is the city with the worst ozone pollution in the nation and has remained so for 20 of the 21 years covered in the history of the State of the Air report.

"What we’ve seen is that when there are fewer cars on the road, we definitely see pollution going down. And that's not surprising because in California, over 80% of our pollution comes from motor vehicles," Policy Director for the Coalition for Clean Air Bill Magavern told AccuWeather in a Skype interview.

Trucks are the biggest source of air pollution in California, according to Magavern, as they almost all run on diesel fuel, which emits exhaust that is toxic to human health. 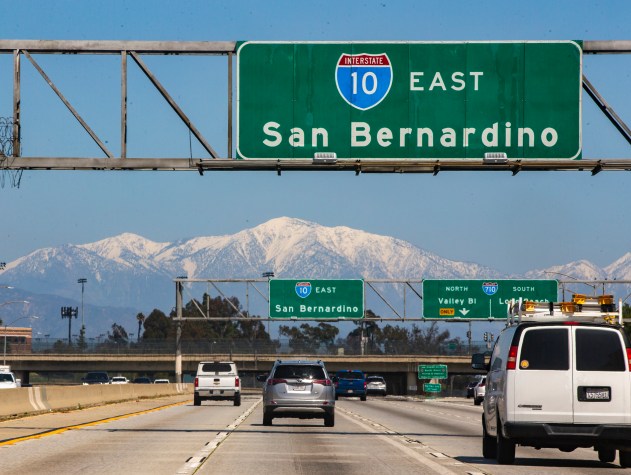 The San Gabriel Mountains are seen from the Interstate 10 in East Los Angeles, Monday, March 30, 2020. Excellent air quality has coincided with lockdown orders in response to the coronavirus pandemic. The area's famous freeways have been nearly empty, but experts say the lack of cars is contributing only a small amount to the clear skies. Researchers are analyzing just how much emissions have dropped. (AP Photo/Damian Dovarganes)

Even with higher populations than the U.S., India and China have seen a reduction in haze. China, the nation believed to be the source of the COVID-19 outbreak, was one of the first nations to experience clearer skies due to lockdowns. A pair of images captured by NASA and European Space Agency pollution monitoring satellites captured the difference in NO2 levels in the air over China between Jan. 1 and Feb. 25.

The change between the two images stunned the world.

The first image, depicting the period from Jan. 1-20 of this year, shows large blotches of orange, which deepen to red the more dense the NO2 levels were, mostly over areas like Beijing, Shanghai and Hong Kong.

In the second image, the red areas faded to specks of yellow in the areas where the pollution hadn't totally vanished. 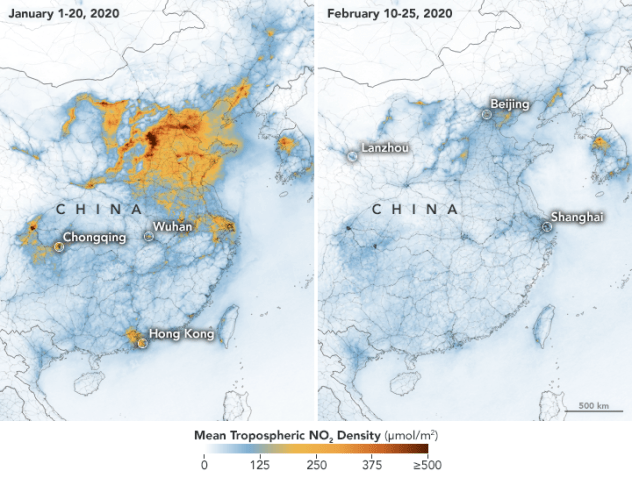 Scientists believe the reduction in pollution over China was largely a result of measures taken to control the outbreak of the coronavirus. (Photo/NASA)

Lacombe and his team at Plume Labs began investigating with the data they could get ahold of -- and started to put the drop in pollution into perspective.

"It was really surprising the disconnect between what we see in the upper ridges of the atmosphere that is sometimes more linked to the industrial emissions levels, not as much as what we would have on the streets that depends on much more from traffic," Lacombe said. "And at that point, we could see pollution going down, but not as much down as you would expect based on the satellite feeds."

Similar images emerged from Italy, and reports over social media from India and Pakistan began sprouting up at the start of April. The shroud of smog had dropped and, for the first time in 30 years, cities located more than 100 miles away were able to see the Himalayas.

The snow-capped Himalayas are now visible for the first time in 30 years for residents in India's north. The beautiful mountains are 200kms away but have not been visible for decades due to high pollution levels. 📷: @covsinghtj pic.twitter.com/M3nNLBq4sr

National Public Radio (NPR) reported that the concentration of PM 2.5, or fine particulate matter, dropped dramatically since India Prime Minister Narendra Modi imposed a nationwide lockdown in March. By the tail end of the month, the Air Quality Index fell as low as 45, while a normal value around that time is about 160. "Good" air quality levels usually range between the ratings of 1 and 50.

New Delhi received 208% of the rainfall it usually receives from Feb. 1 to April 21 with 2.76 inches of rainfall compared to 1.33 inches.

Any improvements that have been gained, however, might not last.

"I do estimate that there will be a bounce back of increased air pollution after COVID-19, after the pandemic has ended," post-doctoral research fellow at the Earth Institute, Columbia University, Robbie M. Parks told AccuWeather in a Skype interview. "I think just even from economic stimulus alone there will probably be an increase in carbon emissions and likely an increase in air pollution such as PM 2.5 emissions," Parks said.

PM 2.5, also known as fine particulate matter, is known to cause health problems such as cardiovascular disease and respiratory illnesses, which can lead to heart attacks, aggravated asthma and decreasing lung function.

In the U.S., The Washington Post reported that senior White House and Trump administration officials are planning to launch efforts to repeal or suspend federal regulations affecting businesses as a way to boost the economy.

"We can have both," Commane said. "We could have cleaner air with policies that most people wouldn't even notice ... We could do all this in the background without the economic impact on people."

"(Air pollution) is a huge problem, much bigger than we think, and the level of ambition that we're going to need is akin to the moon shot and the moon landing," Lacombe said. "I mean, this is when we're talking about controlling emissions, we really need to generate much more ambition, much more creativity, much more innovation and much more collective."