Artist and activist Mundano creates a building facade mural in Sao Paulo, Brazil, from the ashes of burnt trees found in the Amazon rainforest.

For many people, the issues surrounding climate change can be overwhelming, confusing and depressing -- especially when they are presented in alarming news headlines or complicated statistics. A Brazilian artist is hoping to change that and reach a more receptive audience with a towering new mural created using the ashes of Amazon rainforest trees that were burned in fires.

"I'm using evidence of the crime," Thiago Mundano told Ruptly, calling the 10,000-square-foot artwork on the side of an apartment building in Sao Paulo a form of "artivism."

Much like the world-famous street artist and political activist Banksy, Mundano is known for leaving his colorful works of graffiti on walls around the world and is especially dedicated to issues of environmental and social justice.

The mural, titled "The Forest Brigadier," is a reinterpretation of "The Coffee Farmer" by the late Brazilian painter Candido Portinari and replaces the farmer with a forest brigadier who fights forest fires. The mural depicts him standing amid an apocalyptic-looking scene, surrounded by deforestation, fires and dead animals. Mundano said the mural is meant to symbolize the scores of wildfires that have burned in the Amazon this year. 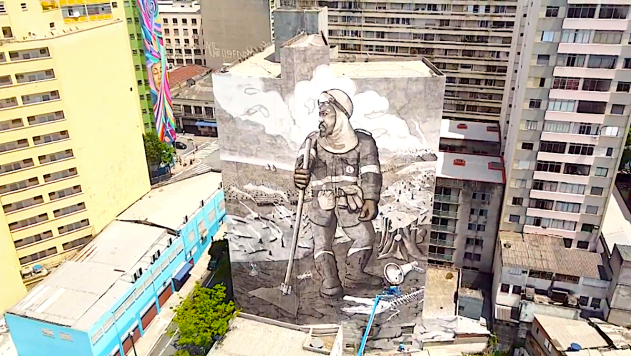 The muralist said he traveled more than 6,000 miles through Brazil's wilderness between June and July to collect ash from the Amazon rainforest. He collected ashes from three primary places: an area known as the Pantanal, part of which is a UNESCO World Heritage said and is the world's largest tropical wetland area; a vast tropical savannah known as the Cerrado; and the Atlantic Forest, which is sometimes referred to as "the other Brazilian rainforest." Mundano also met with firefighters and volunteers to listen to their stories.

"My work brings up themes usually avoided on a day-to-day basis," Mundano told TED Fellows in 2018. "It tries to make people reflect on the issues consuming our planet, and on human relations."

The Brazilian Amazon is considered one of the world's best defenses against climate change because it absorbs and stores a huge amount of the carbon dioxide that humans and companies emit through the burning of fossil fuels. However, a groundbreaking study published in July found that parts of the Amazon are now actually emitting more carbon than they absorb, due to climate change, deforestation and wildfires.

In the summer of 2019, the Amazon captured the world's attention when large swaths of the iconic rainforest burned, leading to a global outcry that President Jair Bolsonaro was not doing enough to protect the rainforest. According to NASA, the 2020 fire season was even more severe by some key measures. This year, although some 28,0000 fires were observed in the Amazon, REUTERS cites government data showing fires in the region declined by nearly half in September compared to a year ago.

Mundano hopes his project grabs the attention of as many people as possible and focuses it on important environmental problems we all played a part in creating but, more importantly, issues that we can and must fix before it's too late.

"This mural is a protest, a cry for help," he declared. "I support fire brigades and also for this fire culture to stop, it's leading us to self-destruction."

The sky is the limit for painter who focuses on weather phenomena
The Amazon rainforest now gives off more carbon than it absorbs
'It's a bit scary': Statue of drowning girl prompts visceral reactions