On Dec. 28, a bus in Eden Prairie, Minnesota, slid on icy streets downhill, after a powerful ice storm swept over the town the night before.

A major winter storm moved into the center of the country just days after Christmas, but has continued to bring enough ice, snow and wind to cause dangerous travel conditions into the start of the new week.

The storm system first brought travel to a standstill in Southern California on Wednesday night but then began to intensify as it expanded northward into the Plains and Midwest on Friday and over the weekend.

Not much has changed on the @MnDOT map over the past few hours. No travel is advised in the Twin Cities metro area. Check https://t.co/AOQI2lO7cB for the latest road and traffic conditions. Please stay home! pic.twitter.com/3o0A8xjziD

By Sunday, a swath of heavy snow spread across Nebraska and the Dakotas.

Some places in central Nebraska, like the cities of Arcadia and Chadron, reported over 8 inches of snow accumulation Sunday morning.

Part of I-80 westbound at Wood River, Nebraska, briefly closed Sunday morning after a semi jack-knifed, blocking the road. No injuries were reported, and the Nebraska State Patrol tweeted that westbound lanes are now open.

An area of I-80 eastbound near Ashland, Nebraska, was shut down after a multi-vehicle crash. It has since been reopened.

"While conditions may be improving in some areas, winter weather is continuing to cause issues in others," the Nebraska State Patrol warned early Sunday afternoon.

Part of 1-90 was shut down from east of Rapid City, South Dakota, to Mitchell on the eastern side of the state.

Rapid City itself was experiencing blowing snow and wind gusts of 50 mph Sunday morning making for slippery travel for open roads in that region as well.

Difficult travel conditions were widespread on Sunday morning, including across portions of I-29 and I-94.

Portions of both highways were closed on Sunday morning, including near Jamestown, North Dakota where as much as 16 inches of snow was reported. 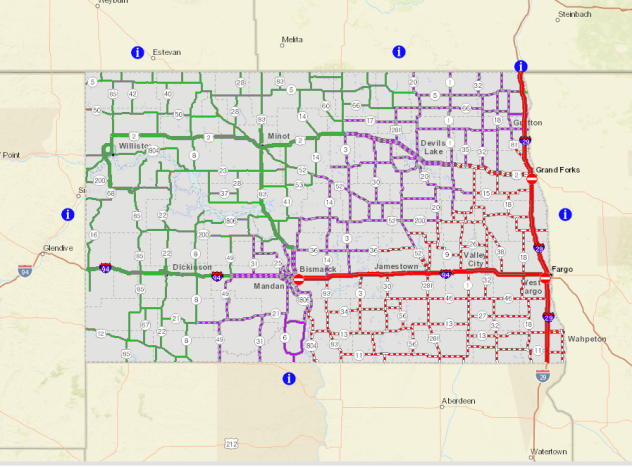 Parts of I-94 in North Dakota and all of I-29 in the state was shut down on the morning of Sunday, December 29, due to snow-covered roads (Image/NDDOT)

In Ellendale, North Dakota, emergency management reported 14 inches of snow on the ground on Sunday morning, as well as "complete whiteout conditions".

The National Weather Service office in Aberdeen, South Dakota, was urging motorists to stay off of the roads on Sunday night.

"Although snow has stopped falling in many locations, accumulated and blowing snow continue to pose travel hazards this evening," they said on Twitter. "Many roads are under no travel advisories, and portions of I-90 remain closed. Stay home and stay safe!"

If you can, stay off the roads! Nearly all roads are either CLOSED, or have NO TRAVEL ADVISED tonight. Remember, it's not only you that you're putting in danger, but first responders as well. https://t.co/JymV3nQTRO #sdwx pic.twitter.com/KLtvZ7OzZq

A widespread swath of 8-16 inches of snow had fallen from central Nebraska through South Dakota, eastern North Dakota and northern Minnesota as of Sunday night.

Continued bands of snow and gusty winds will prolong dangerous travel conditions across the northern Plains through Monday.

Isolated pockets of blizzard conditions can occur from northern South Dakota to eastern North Dakota as winds continue to howl.

BLIZZARD warning now in effect here in Fargo, North Dakota and for much of south east North Dakota! I-29
to Canadian border closed. I-94 from Fargo to Bismarck. #ndwx @MyRadarWX pic.twitter.com/GkFcPwPMUX

Officially, the National Weather Service defines a blizzard as a storm which contains large amounts of snow or blowing snow, with winds in excess of 35 mph and visibilities of less than a quarter of a mile for at least three hours. 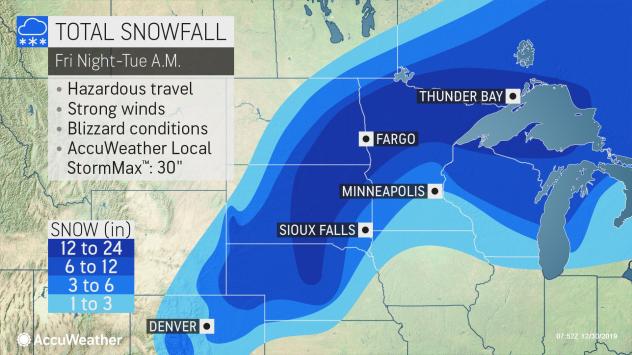 US New Year’s Eve: Where will the weather cause concern or celebration? Best Places to Spend New Year’s Eve Complex storm to end calm stretch of weather in Northeast prior to New Year’s Eve

Meanwhile, on the warmer side of the storm, milder conditions ahead of the storm led to fog across parts of Minnesota and Wisconsin.

Visibility at Minneapolis-St. Paul International Airport to Straubel Field Airport in Green Bay dropped down to a quarter of a mile late in the morning on Sunday.

After leaving double-digit snowfall in it's wake, the storm system is expected gradually shift over the western Great Lakes on Monday.

The steadiest snow will continue from the eastern Dakotas to Lake Michigan across the Upper Midwest. Overall, the snow is expected to be less intense than the snow that fell over the weekend; however, blowing and drifting snow may continue to reduce visibility and bring snow back on to previously-cleared roadways.

Following all rain so far with this storm, cities like Chicago and Detroit will have a wave of snow move through Monday night into Tuesday.

The storm's next target will be the Northeast, where rain, ice and snow will break the string of calm weather days.