Police were waiting for a surfer to exit the water at a beach near the Italian island of Sardinia on March 22, as a nationwide lockdown continued due to COVID-19.

Amid the COVID-19 outbreak across the world, many are looking for some sunshine and fresh air, even from their patios and backyards. Those hoping for calm spring conditions across southern Europe will instead get saddled with wet, and in some areas, wintry weather.

Two storms will combine to bring snow and rain to central and southeast Europe through early this week.

"A cold front will move across central Europe and into eastern Europe early this week," said AccuWeather Meteorologist Rob Richards.

Showers will follow along this front as it shifts to Poland and Ukraine by Monday. At the same time, snow will continue to pile up in southern Germany and the Alps.

"Across the Alps is where the heaviest snow accumulations are expected, as the highest peaks could get as much as 30-60 cm (1-2 feet) of snow," added Richards. 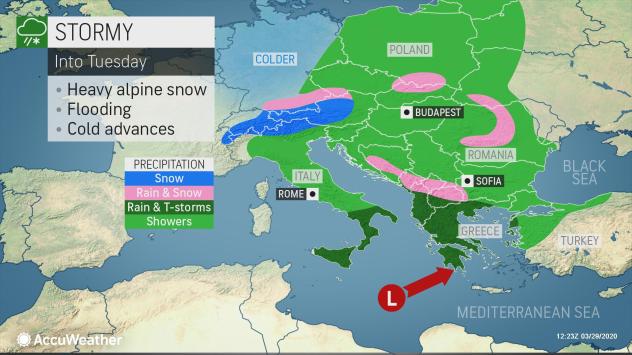 Simultaneously, a storm moving across the eastern half of the Mediterranean will funnel more moisture into southeast Europe.

Combined with the moisture diving down across central Europe, these storms will make for an unsettled few days across much of the southeastern part of the continent.

Cold air will follow behind the front in the north, allowing temperatures to decline through the week.

After starting off the weekend near 15 C (59 F) in cities like Berlin, Germany, and Warsaw, Poland, the mercury will struggle to reach 5 C (41 F) by Monday. Highs around 17 C (63 F) in Budapest, Hungary, and Bucharest, Romania, on Sunday will be replaced with temperatures in the single digits C (40s F).

With the below-normal temperatures expected in these cities during the day, overnight lows are expected to dip below freezing in the higher elevations. These areas are likely to get mainly rain during the day, but they could receive some snow where precipitation continues overnight.

On the southern side of the storm, temperatures are likely to be too high for snow. Widespread rainfall amounts of 5-20 mm (0.25-0.75 of an inch) are expected, but should the Mediterranean storm strengthen, rainfall amounts of 25-75 mm (1-3 inches) will be more common. 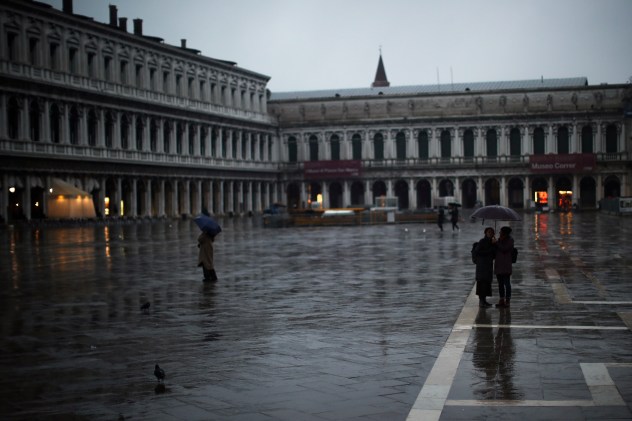 Tourists shelter against the rain with umbrellas as they walk in the empty St. Mark's Square during a rainy day in Venice, Sunday, March 1, 2020. (AP Photo/Francisco Seco). Italy, as the country went on lockdown on March 9, 2020.

However, even rain could make a significant impact for places such as Italy and Greece.

Following the wet weather during the last full week of March, which brought over 125 mm (5 inches) of rain to parts of southern Italy, much of Italy and Greece could become more susceptible to flooding.

Most of the storm will move into the Middle East by the start of April, although another quick wave of moisture may bring additional rain from central Italy to Greece and Bulgaria on Wednesday.

AccuWeather meteorologists say the stormy pattern across southern Europe will continue into the first weekend in April.