Flight delays and cancellations began mounting on Wednesday as the second winter storm of the week dropped snowfall.

AccuWeather meteorologists say another winter storm will take aim at the Northeast and the cold air will allow for heavier accumulations across the region.

The final full week of January started on a wintry note as a winter storm blanketed a swath of the interior Northeast with snow that disrupted travel and caused disruptions to daily activities. Another snowstorm will follow close on the early-week system’s heels, AccuWeather forecasters say, and the cold air left behind the first storm could allow the second to unload heavier accumulations and pack a bigger punch.

"The potential for this storm to have a negative impact on travel is significant and from a flight standpoint alone is likely to be the most disruptive since a month earlier during the Christmastime Arctic cold and snow outbreak," AccuWeather Senior Meteorologist Alex Sosnowski said. 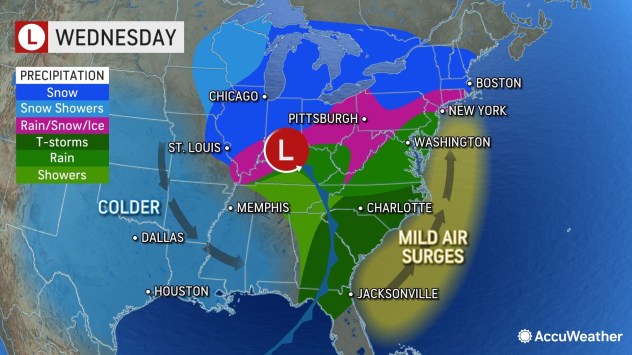 "Some of the major hubs will be hit with snow and deicing operations with this one, including Chicago and Detroit, but even the hubs of Boston and perhaps the New York City area will be dealing with a wintry mix for a time on Wednesday," Sosnowski said. "Heavy rain, poor visibility and gusty winds can result in delays as far south as the major hubs in Washington, D.C., Charlotte and Atlanta."

Torrential rain and gusty thunderstorms were pivoting through the Southeast as light to moderate snow was falling on Chicago and Detroit during Wednesday morning rush hour. According to FlightAware.com, all inbound flights to Chicago's O'Hare International Airport were being held at their destination at the start of the day. Hundreds of flights have already been canceled or delayed in the U.S. for Wednesday.

The second winter storm began strengthening in the southwestern United States on Monday and brought bring snow from New Mexico and northwestern Texas to southern Missouri through Tuesday. As the storm continued its trek northeastward, snow arrived in the Ohio Valley on Tuesday night and will reach the Northeast by Wednesday. 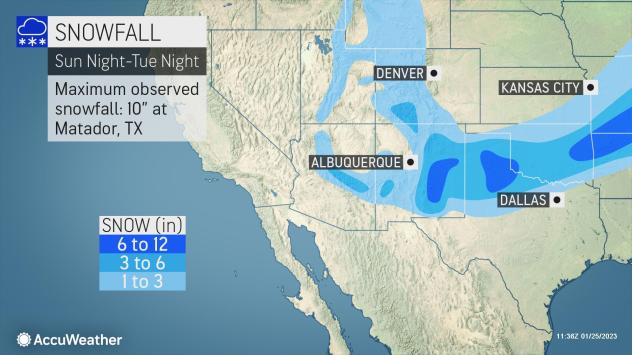 “Motorists traveling along interstates 70, 80, 90, and many other highways that stretch across the Midwest and interior Northeast will be in for a wintry drive that is likely to be strewn with accidents and delays throughout much of Wednesday,” Sosnowski said.

Not only will colder air be in place as the storm gets underway from Chicago and Detroit to Syracuse and Albany, New York, allowing snow to accumulate faster, but the colder air will also stay put throughout the storm’s duration, meaning that precipitation will remain as snow throughout the entirety of the storm.

A wide swath of 3-6 inches of snow is expected from southern Missouri, Indiana, Ohio and southern Michigan to Pennsylvania and New York to Maine. The heaviest snowfall will pile up from northern New York to interior parts of Maine, where a foot or more will accumulate. The AccuWeather Local StormMax™ of 24 inches could fall in that zone. 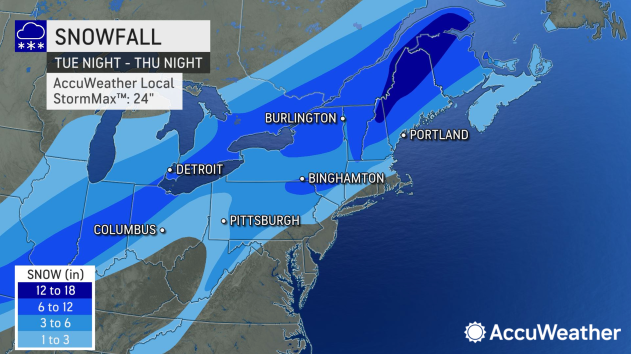 In the Midwest, a narrow band of over 6 inches of snow is also expected and currently looks to impact cities such as Indianapolis, Indiana, and Toledo, Ohio.

Just to the north, Detroit will be positioned near the edge of this heavier snow, with 4 to 8 inches of accumulation expected according to the latest forecast. It is in this region where the National Weather Service has issued winter storm warnings, where conditions are likely to be most disruptive.

Areas in the Midwest and the central Appalachians can expect snow-covered roadways for a time into Wednesday. 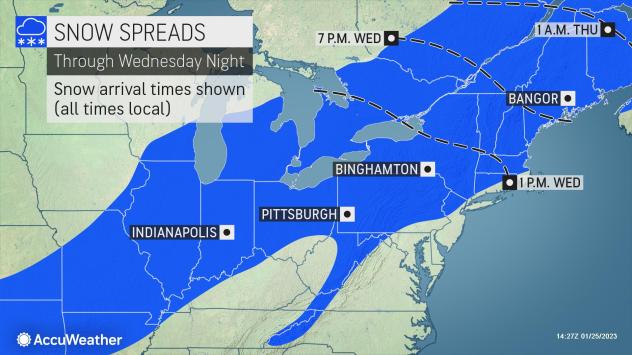 Closer to the Atlantic coast, milder air will arrive, causing snow or a wintry mix to change to rain -- or all rain to fall south of Boston.

While some snowflakes are forecast to fly in New York City on Wednesday morning, warmer air surging northward along the Eastern Seaboard will change the snow to rain. Should this transition happen early enough, the city may once again endure another storm without any accumulating snow.

In the Big Apple, the longest streak of days without 0.1 of an inch of snow or greater was 332, a streak that ended on Dec. 15, 2020. Through Tuesday, Jan. 24, the city had gone 321 days without measurable snowfall, the second longest snow drought of all time there. Due to the forecast arrival time of the snow later Wednesday, after temperatures have warmed up some, the odds of measurable snow in the city are low, but not zero. 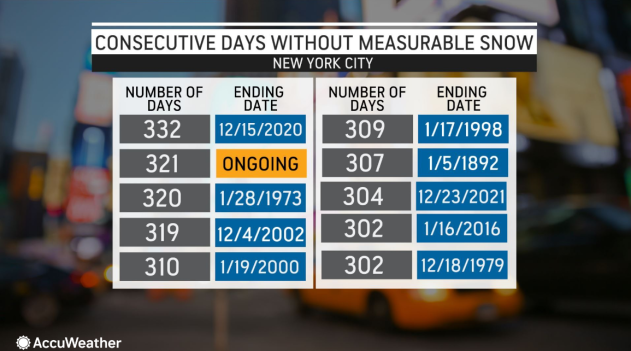 Consecutive days without measurable snow in New York City as of Jan. 24, 2023.

AccuWeather meteorologists say it appears likely that the milder air moving into the Northeast throughout the storm could cause the precipitation to change to a wintry mix and rain for many other locations as well.

From Philadelphia southwestward to Washington, D.C., there should be enough of a mild push to limit concerns of accumulating winter precipitation to the northern and western suburbs while the cities receive all rain. 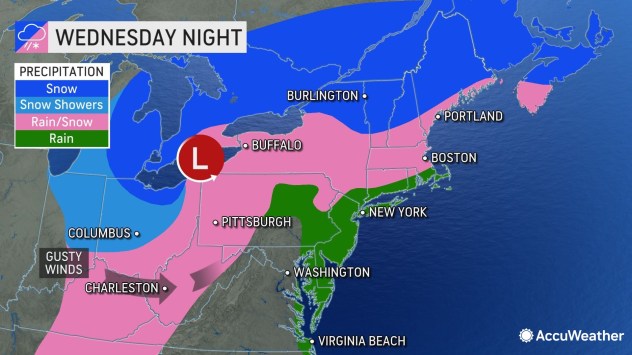 The cold air associated with the storm is set to swoop into the I-95 corridor by Thursday. However, by this time, the storm and most of its precipitation will likely shift over northern New England, minimizing the chances of snowflakes. During the day on Thursday, the most difficult travel will be confined to northern New York, Vermont, New Hampshire and Maine, including parts of interstates 87, 89, 91 and 93.

A bit to the south, across much of Pennsylvania, snow may only last for a short period of time. While this may keep the highest snow totals out of the area, accumulation rates may exceed 1 inch per hour for much of Wednesday morning in cities such as State College and Williamsport, which can lead to very low visibility and poor travel conditions for a time. 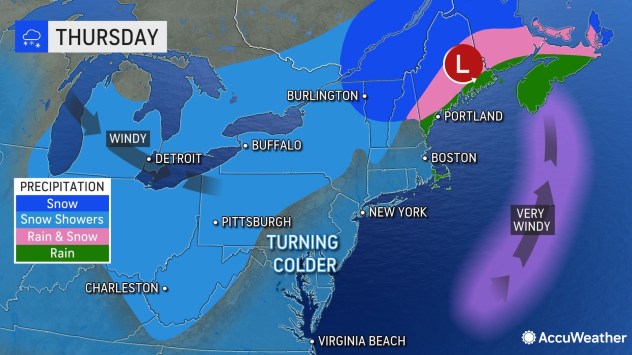 Even with the heaviest snow in New England, the storm will continue to be impactful farther west on Thursday.

Gusty winds following behind the storm will continue to rush over the Great Lakes, allowing snow showers to linger from Michigan and northern Indiana to the Appalachians of West Virginia, Pennsylvania and New York. Additional substantial accumulation is not likely in most locations, although areas immediately downwind of Lake Michigan, Lake Erie and Lake Superior could get a fresh coating of snow and some new slick spots.

The cold air left in the wake of this midweek storm may open the door for more snow opportunities in the final days of January.