Wyoming reported their highest two-day snowfall levels with this storm, while Colorado residents got outside to enjoy the snow.

A snowstorm of epic proportions swept across the western United States this past weekend, dropping over 3 feet of snow in many areas and leaving tens of thousands of residents without power under the heavy blanket of record-breaking snow totals.

The storm left historic mounds of snow in its wake, dropping 30.8 inches of snow in Cheyenne, Wyoming, the most snow from a single storm the city had ever seen. The previous record was set in 1979 when the city received 25.2 inches over two days.

This same system would become the fourth-largest snowstorm in Denver history, leaving over 27 inches of powder at Denver International Airport. Throughout Colorado, five locations received at least 3 feet of snow, led by Buckhorn Mountain’s 42 inches recorded over the weekend. 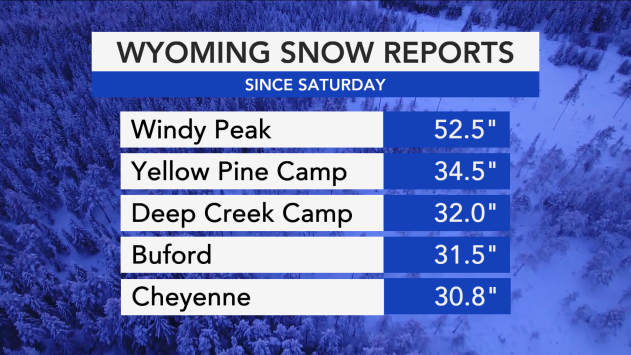 In Wyoming, even the most winter-proofed lifelong residents wouldn’t be able to recall a storm that packed this heavy a punch. Along with Cheyenne’s all-time record, a site atop Windy Peak in the Laramie Range reported 52 inches of snow, according to the National Weather Service (NWS). The “historic” conditions spewed far enough to even drop 19 inches of snow in Nebraska, triggering the closure of Interstate 80 near Gering, according to The Associated Press.

By early Monday morning, the 27.1 inches of snow reported at the Denver International Airport, forced all airlines to cease operations, leading to the cancellation of 1,072 departing flights and 1,116 arriving ones.

Other locations in Colorado received in excess of 3 feet such as Aspen Springs, which recorded 40 inches of snow. 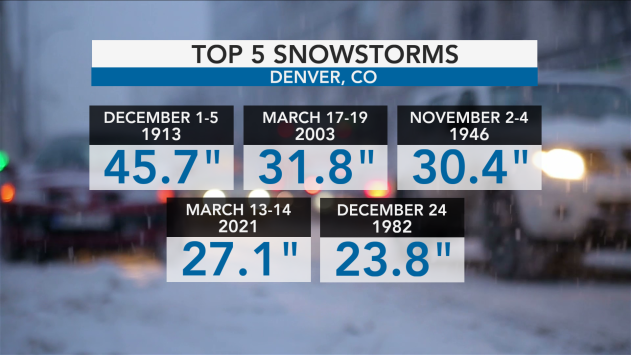 Colorado Gov. Jared Polis announced that he activated the Colorado National Guard to respond to search-and-rescue requests through the state's Emergency Operations Center from 12 p.m. Friday until 12 p.m. Monday.

The dangerous winter conditions also sparked widespread power outages, leaving over 54,000 customers in the dark at one point on Sunday morning, according to PowerOutage.us.

The heavy, late-winter snow wasn't despised by all, however. Despite the calendar suggesting that the spring equinox is less than one week away, the heavy snow gave some residents a chance to enjoy one more snowball fight, driveway shoveling and time spent in the wintry outdoors.

"I’m originally from the East Coast, so this heavy type of snow is more of my kind of snow than I’m used to here, but I think its really great and I'm so happy to be in Boulder where there’s so much to do on a snowy day,” Colorado resident Maura Roche told AccuWeather National Reporter Kim Leoffler. “I think this is just the perfect amount to have fun and get some great recreation and enjoy the last throes of winter without being stuck inside.”

The Douglas County Sheriff's Office in Colorado reported that it was responding to many people throughout the county who were stranded in their vehicles on Sunday. A deputy and a Colorado Department of Transportation plow were among the vehicles that were having problems. 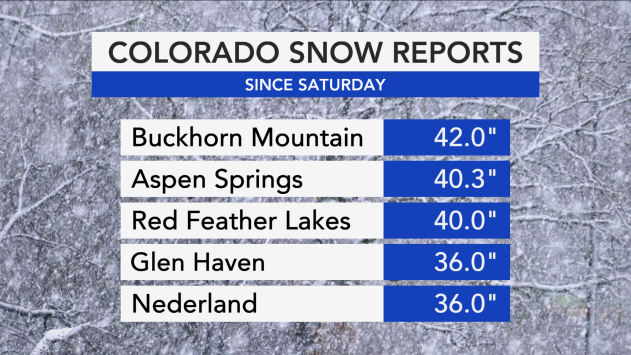 Denver International Airport's fleet of snow-removal vehicles prepared early, so they could take on the snow as soon as it arrived.

“The good news is that snow in Denver is not unusual, maybe this much is, but we plan all year for big storms,” The Denver International Airport Spokesperson, Emily Williams, said.

The ferocious storm also packed intense winds, causing whiteout conditions and forcing drivers off the roads. Gusts topped 70 mph in Douglas Pass, Colorado, while other locations in Utah and Nebraska saw wind speeds over 60 mph on Sunday. In the Pikes Peak region, the El Paso County Office of Emergency Management issued a statement urging residents to avoid driving if possible, as the wind-driven snow drifts piled up.

“EL PASO COUNTY ROAD CONDITIONS UPDATE: We’ve had 36 plows out conducting snow operations since this morning. At this moment roads range from wet to snow packed, with most areas seeing icy conditions,” the county’s spokesperson said on Twitter. “Most plow operators reported moderate to heavy winds and blowing snow creating very poor visibility throughout most of the County.” 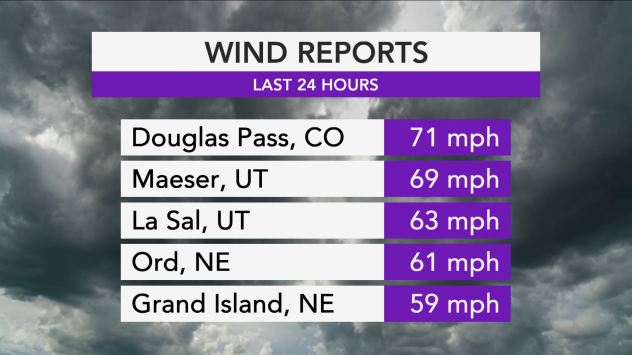 Along I-25, the NWS office in Boulder reported that roads were getting "slushy" on Saturday night, and conditions deteriorated in a hurry throughout the day on Sunday, leading to travel becoming nearly impossible.

Portions of I-25, I-70, I-76 and I-80 were shut down as a result of the treacherous travel conditions on Saturday night.

Conditions on I-70 began to get "treacherous," as the snow fell steadily. Colorado State Patrol announced a westbound closure at C-470 on 260, with all traffic being diverted east on Colorado 470.

By Sunday afternoon, the Colorado State Patrol said conditions continued to deteriorate to the point that flares put out to block the ramp to westbound I-70 from C470 were no longer visible.

Traffic cameras in the area all showed the same scene: roadways covered with so much snow that they became indistinguishable from the surrounding ground.

On Sunday morning, I-25 was closed north of Fort Collins, Colorado, near Wellington, to the Colorado and Wyoming border.

"We just received a report from a caller in Wellington who said 10-inch- diameter trees were snapped in his neighborhood and power lines are laying on the ground. Roughly 14 inches of snow is on the ground," NWS Boulder tweeted.

The mixture of persistent snow and howling winds reached the NWS criteria for a blizzard, fulfilling the daunting forecasts laid out ahead of the storm's arrival and the blizzard warnings that were sent out ahead of the storm. A blizzard is defined as a storm that packs winds of at least 35 mph and a visibility less than one-quarter of a mile for three or more hours.

The blizzard warning, which focused heavily on visibility and snow totals, for the Denver area followed a winter storm warning, which is issued if at least 6 inches of snow can be expected over a 12-hour span. As Colorado, Wyoming and Nebraska residents can attest, that was certainly the case this past weekend.

Melting two-plus feet of snow will be no quick task for Mother Nature, but a sharp temperature turnaround will flip the switch from blizzard to comfy in just a matter of days.

By the end of the week, conditions in Denver are forecast to reach nearly 60 degrees and potentially mix with spotty showers over the weekend, both of which could help drastically reduce the height of snow piles. It's been a weather roller coaster ride of late for people in and around the Mile High City.

Just four days before the big snowstorm began, Denver weather was spring-like, with high temps in the upper 60s for several days.