A robust storm will deliver a variety of weather hazards across the central and southern U.S. through midweek.

A large storm that gained strength moving through the Rocky Mountains will leave a swath of heavy snow in its wake, including in areas as far south as northern Texas, AccuWeather forecasters say.

"Robust atmospheric energy tracking across the Southwest early this week will set the stage for a potent storm to take shape over the southern and central United States," explained AccuWeather Meteorologist Mary Gilbert. 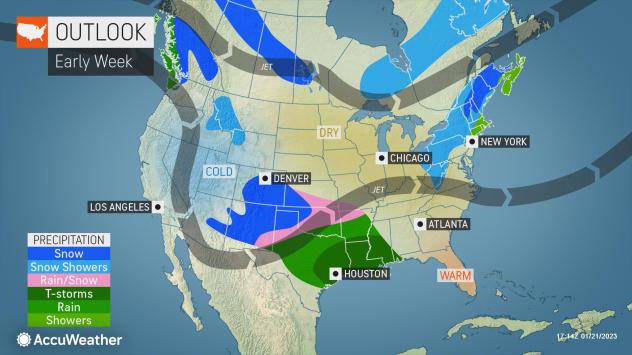 As the storm begins to trek over the southern and central U.S., it will begin to tap into abundant moisture from the Gulf of Mexico. This will unload drenching rainfall and severe weather across the Gulf Coast, but also fuel heavy snow across portions of the southern Plains, Gilbert continued. Snow hit several areas in the Plains on Saturday, including in western Kansas and portions of Nebraska.

Snowfall totals reaching nearly 6 inches will be possible across an area that is not often associated with winter weather. Oklahoma City, for example, averages just 6.7 inches per year. However, the city could receive a decent chunk of that average in just 12-24 hours from this storm system.

Farther south, the storm will likely bring mainly rain to the Dallas-Fort Worth metroplex, although it's not out of the question that some snowflakes will mix in late Tuesday.

"The last time measurable snow, or more than a trace of snow, was recorded at Dallas-Fort Worth International Airport was back in February of 2022," stated Gilbert. On average, the area receives just over 1.5 inches of snow per year. 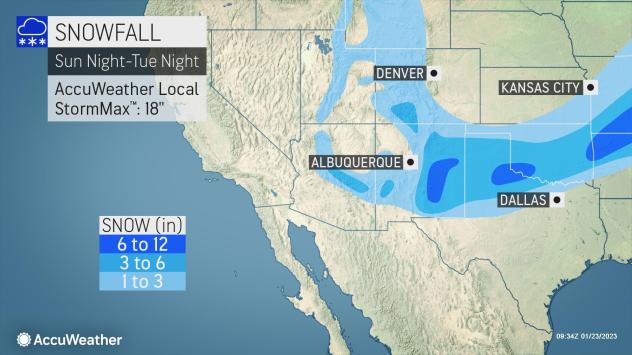 Travel will become difficult as snow falls and visibility is significantly reduced. In addition to reduced visibility, even a minor coating on roads can make for slippery conditions, further hampering travel.

Power outages could be a risk as well across the region due to the wet, heavy snow. Heavier, stickier snow cannot only weigh down power lines but also tree branches that hang over power lines. These branches could then break under the weight of the snow and potentially fall on the power lines.

The picture gets a little messier once the storm approaches the Ohio Valley, forecasters say. With a storm that has as much energy as this one, subtle changes in the jet stream can send the storm farther north or south, which in turn would have a substantial impact on snowfall totals.

The most probable storm track from Tuesday onward would bring the storm from South Texas and Louisiana quickly northeastward towards Pennsylvania by Wednesday night. 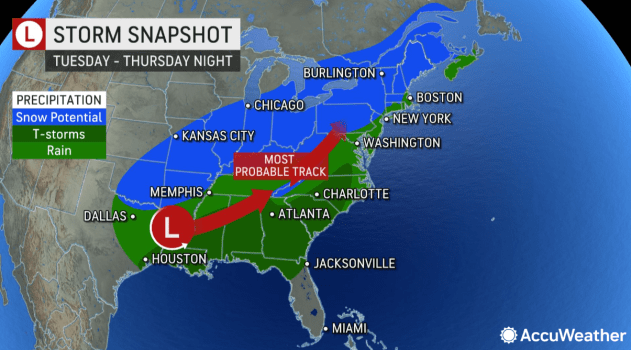 A mix of rain and snow or just plain rain can be expected on the southeastern side of the storm, which could also cut into snowfall totals. AccuWeather meteorologists are currently highlighting the area from Springfield, Missouri, all the way up to northern Maine and Atlantic Canada as having the best chance for heavy snow.

As the storm makes its way northeastward, it will bring the risk of disruptive snow to a few major cities, including St. Louis, Chicago and Detroit. While exact snowfall totals are still up in the air for these cities, the concern for a lengthy period of mixed precipitation cutting into their snowfall totals will be low as they are on the colder northwestern side of the storm track.

Snow will likely begin Tuesday night in St. Louis and into the early morning hours on Wednesday in Chicago and Detroit, potentially impacting the morning commute. The storm will then dump snow for 12-24 hours before it is expected to conclude in all cities Wednesday night. While the heaviest snow will be over, a few residual snow showers or flurries can still occur in Chicago and Detroit on Thursday.

Even though Chicago is situated outside the potential for the heaviest snow band, the city won't be out out of the woods. All three cities previously mentioned will likely have travel delays as a result of the storm and could even have some power outages. 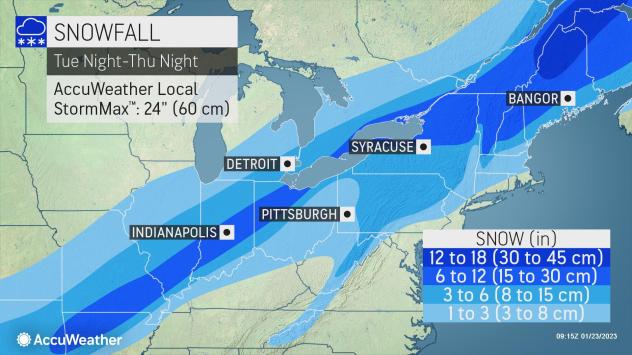 Once the storm enters the Northeast, the stage could be set for more snow across the interior and perhaps even closer to the Interstate 95 corridor. While nothing is set in stone at the moment, the storm track looks favorable for New York City and Philadelphia to continue their snow drought.