AccuWeather meteorologists say the second of two mini storm systems traveling from the Midwest to the mid-Atlantic over the weekend cold spread snowflakes to areas just north and west of Interstate 95.

Those hoping for some holiday cheer in the form of snow may not have to wait much longer in portions of the Northeast, according to AccuWeather meteorologists. Residents in locations near the Atlantic coast will likely receive their first snowflakes and perhaps the first accumulating snow of the season this weekend.

The second of two "mini" storm systems traveling from the Midwest to the mid-Atlantic into early next week will have the best chance of bringing snowflakes to the coast and perhaps a few inches to some areas just north and west of Interstate 95.

The first of the two small storms produced a stripe of moderate snow from southern Wisconsin to southwestern Michigan on Friday. Harmony, Minnesota, reported 9 inches of snow on Friday evening as a result of the storm.

However, that first storm and its snow will run into a wall of dry air and fall apart east of the Appalachians by Saturday. As a result, only light rain or freezing drizzle is likely to make it as far east as the mountains of western Pennsylvania through midday Saturday, AccuWeather forecasters say. 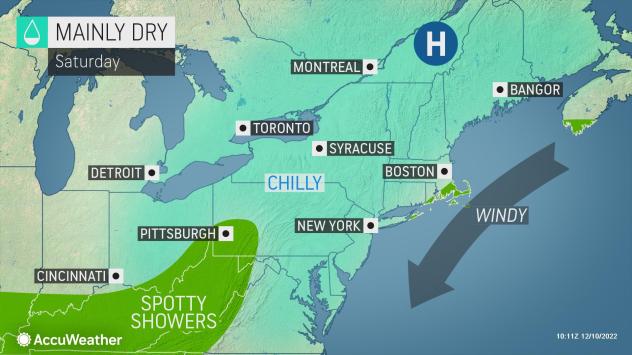 The dry air will be overwhelming enough to prevent rain from extending to New England and the mid-Atlantic coast on Saturday. Aside from the patch of precipitation early in the day in the central Appalachians, the period from Saturday to Saturday night should be ideal for travelers in the Northeast.

Dry weather is in store for the Army-Navy football game at Lincoln Financial Field in Philadelphia on Saturday afternoon. AccuWeather RealFeel® Temperatures during the game will be in the upper 30s F.

There is every indication that not only will the second of the two storms be successful at bringing rain to the mid-Atlantic and southern New England regions for a time on Sunday, but as the storm strengthens just a bit near the ocean, enough cold air could be drawn southward to cause a change to snow in some coastal areas later Sunday or Sunday night. 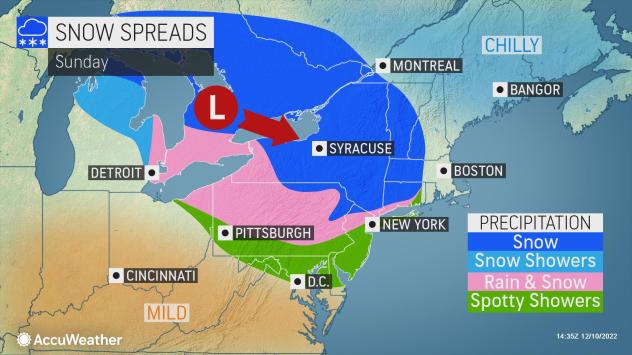 "A general 1-3 inches of snow is in store over part of the interior Northeast from the storm," AccuWeather Senior Meteorologist Brett Anderson said. He noted that this includes much of New York, northwestern New Jersey, western portions of Massachusetts and Connecticut and northern and central Pennsylvania.

Skiers may jump for joy in the Catskill and Pocono mountains, where several inches of snow could pile up from Sunday to early Monday. These areas have the best chance at picking up the AccuWeather Local StormMax™ of 10 inches of snow from the storm. Stretches of I-80 and I-81 over the higher terrain of northeastern Pennsylvania could become slippery for those heading back to the coastal cities on Sunday and Sunday night. 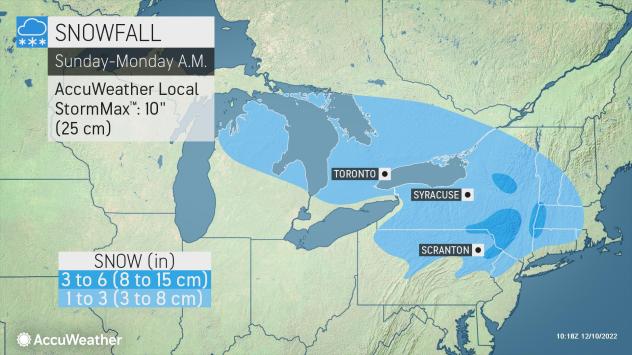 Airline delays will be possible from Sunday evening to Monday morning due to deicing operations and poor visibility at some of the primary and secondary airports in the region.

Since much of the snow that occurs will fall at a light pace, most major roads in the lower elevations will be wet with possible slushy spots during the daylight hours on Sunday. As road surfaces cool slightly at night, they can become slippery, Anderson explained. 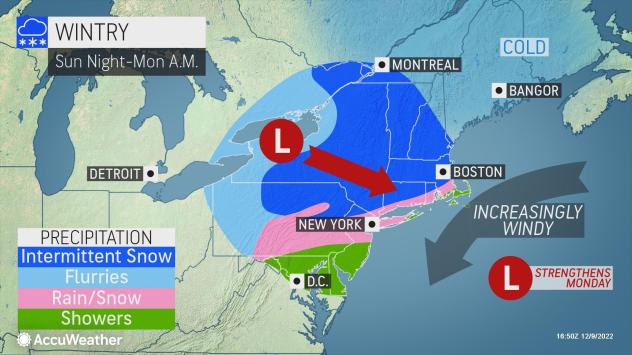 How quickly the storm strengthens over the coastal waters of the Atlantic may be critical as to whether or not accumulating snow reaches as far north as Boston and as far south as Philadelphia. New York City will be smack in the middle of the zone likely to at least have rain transition to snow.

"Should the storm ramp up quickly, a coating to an inch of snow can fall along the upper mid-Atlantic and southern New England I-95 corridor, mainly on non-paved surfaces," Anderson said.

The last time there were snowflakes in Manhattan was on March 27, and the last accumulating snow there was on March 9 when 0.4 of an inch fell. The city's most recent total of 1 inch or greater fell on Feb. 13. 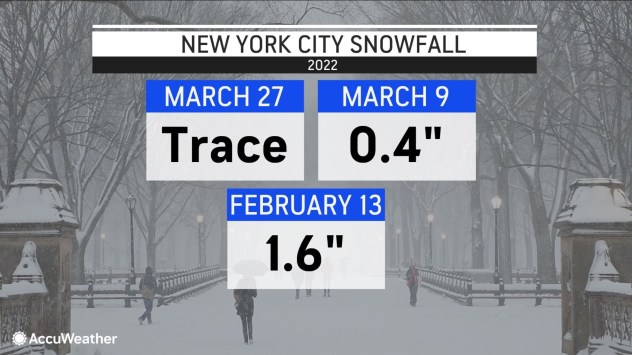 The last time there was accumulating snow in Philadelphia was Jan. 28-29, 2022, when 7.5 inches piled up. The most recent time Boston had more than a trace of snow was back on March 12 when 0.2 of an inch of snow coated the ground.

Snow has been no stranger to the shores of lakes Erie and Ontario over the past month, as multiple lake-effect events produced feet of snow in mid-November. Some pockets of snow have also coated the Appalachians in prior weeks, but no snow has made it to the mid-Atlantic and southern New England coasts just yet.

Motorists heading to the major cities from the northern and western suburbs of New York City and Philadelphia, as well as the western suburbs of Boston, should be prepared for delays and allow themselves extra time to get to work on Monday, forecasters say.

Snow and a wintry mix may struggle to reach areas in New England north of Boston. At this time, forecasters do not expect the atmosphere to cool fast enough to allow snowflakes to fly from Washington, D.C., to areas farther south, but some wet snowflakes cannot be ruled out north and west of the nation's capital for a time Sunday night to early Monday.

As the storm moves out to sea, conditions should steadily improve during the midday and afternoon hours on Monday. Any accumulation of snow and slush in the I-95 zone should melt. However, untreated roads that remain wet could freeze up Monday evening. 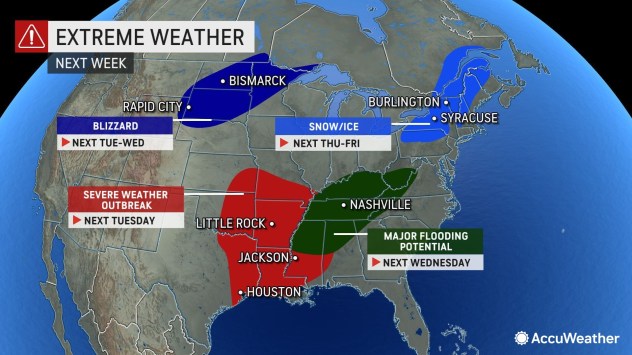 The next round of rain with the potential for a period of ice and/or snow over the interior Northeast will come later next week as a monster storm brings blizzard conditions to the northern Plains and a severe weather outbreak to the South Central states.