Frigid temperatures and a weakening system will bring a wintry mix from the Ohio Valley to the Northeast, producing some of the first flakes of the season along the Interstate-95 corridor.

A wintry setup at midweek will produce a period of snow from parts of the Ohio Valley to much of the northeastern United States, including some light snow along the Interstate 95 corridor, AccuWeather meteorologists say. However, accumulations will vary across the region as a storm unfolds.

Following highs that were well into the 50s, 60s and even near 70 on Monday, temperatures were 20-30 degrees lower during the day Tuesday in the Northeast with highs topping out in the 30s and lower 40s. Brisk winds added to the chill with AccuWeather RealFeel® temperatures in the teens and 20s for many locations. This blast of cold air is from a different storm, which dropped up to a foot of snow and delivered below-zero temperatures over the northern tier of the Central states on Monday morning. The frigid air will set the stage for winter precipitation by midweek. 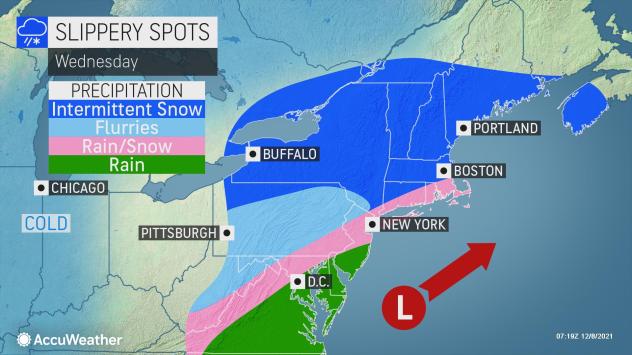 Tuesday night, actual temperatures dropped into the 20s over the interior Northeast and to the 30s along the major I-95 cities from Washington, D.C., to New York City and Boston, just ahead of an approaching storm.

The systems that will bring the light round of snow to the Northeast at midweek were rather weak and fragmented as of Wednesday, with one piece of jet stream energy over the northern Plains and another piece over the southern Plains. AccuWeather meteorologists expect the storm to come in as two separate parts, both of which will be weak, while swinging into the Northeast on Wednesday. The system will also be fast-moving, and that could limit the amount of Gulf of Mexico and Atlantic Ocean moisture the storm is able to tap. Because of these factors, snow is expected to be light and intermittent across the region.

Following spotty snow and flurries from Tuesday night over the Ohio Valley and the central Appalachians, the storm system will spread similar conditions to New England and parts of the mid-Atlantic on Wednesday.

Snow accumulations will generally be limited to less than an inch and many places may only see a coating of snow, especially since temperatures will be near to slightly above freezing, according to AccuWeather Senior Storm Warning Meteorologist Brian Wimer.

Along the I-95 corridor, from Washington, D.C., to New York City and Boston, and farther east at the East Coast beaches, rain and sleet can mix in with snow at times. On top of that, air temperatures near and slightly above freezing and slightly warmer road surfaces may cause much of the snow that falls to melt on pavement. Because of those factors, accumulations are not likely on roads.

Most of the major cities along I-95 from Washington, D.C., to Boston have only received flurries that have not accumulated. Since official snow measurements are taken on elevated, non-paved surfaces, some of these cities may record their first 0.1 of an inch of snow or greater of the season from the storm.

A patchy coating of snow can accumulate on non-paved surfaces and motorists and pedestrians may encounter slippery spots on their travels, especially on bridges and overpasses, as well as in the hilly areas in the suburbs or more distant countryside.

Airline delays are to be expected Wednesday in the region as snow and a wintry mix will likely prompt aircraft deicing operations.

The storm may gather more strength as it heads farther northeast and approaches New England. The air will also be colder with more moisture present in the atmosphere when the storm arrives. Due to these ingredients, snow accumulations of 1 to 3 inches are possible. 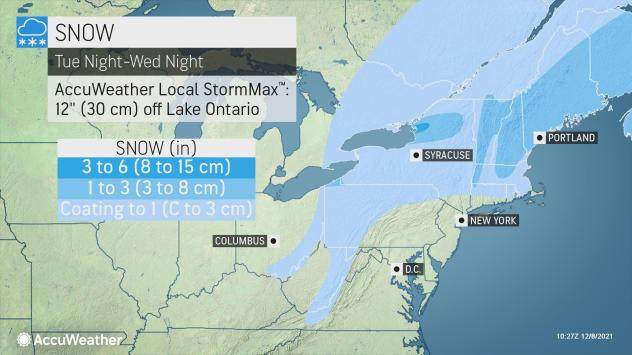 Snow is expected to fall Wednesday night into Thursday morning and that could bring a small accumulation to roads, leading to pockets of slippery travel in parts of southeastern New England before the storm heads out to sea.

Throughout the region Wednesday night, another dip in temperatures can cause untreated wet roads and sidewalks to freeze. Motorists and pedestrians should exercise caution as any surfaces that appear to be wet could in fact be covered with a thin sheen of clear ice.

There is the chance that the storm will be so weak or track so far to the south as to only produce intermittent snow throughout the region. In that case, snow may struggle to accumulate much even in the grassy areas of the higher elevations in the region. 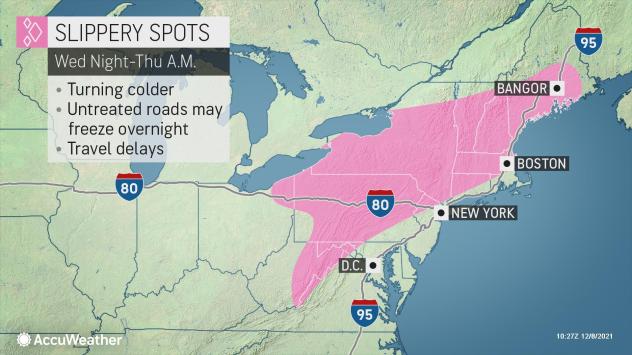 Only if the storm strengthens significantly and slows down might the anticipated light to moderate snowfall evolve into a moderate to heavy snowfall event. In that highly unlikely case, temperatures would be several degrees lower due to the heavier rate of snow.

Regardless of the amount of snow that falls, the coldest air and most widespread cold weather of the season will unfold across the region into Wednesday night. The bulk of the cold air is forecast to ease during the second half of the week, but there may be another brief round of snow or wintry mix prior to the end of the week. D.C. area crews say they've been 'over-preparing' for the storm for past few days