A storm that arrived on Sunday will continue to cause travel disruptions through Monday.

A storm snarling travel in the Midwest will re-energize in the northeastern United States with heavy rain for part the mid-Atlantic and substantial snow and ice for part of New England early this week.

Widespread and even heavy precipitation for some is predicted through Monday night.

Rain in store for most major cities

Many major cities across the region received a thorough soaking of rainfall on Sunday. One-quarter to 0.50 of an inch of rain was common from Washington, D.C., to Pittsburgh and New York City.

Into Monday afternoon, the weather is likely to be miserable in New York City and Philadelphia with periods of rain, foggy episodes and a brisk easterly wind. People commuting around the city should be prepared for urban flooding and travel delays on the highways and at the airports.

About 100 miles north of New York City, cold air will linger and lay the foundation for wintry precipitation, including a substantial buildup of ice.

The key to how much snow versus ice occurs will be how successful a layer of warm air is able to extend northeastward. 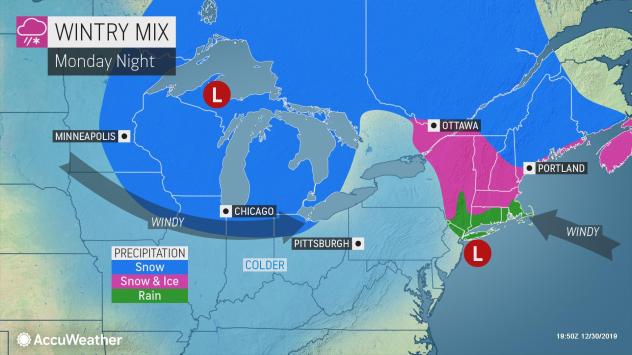 "Should the warm air race in a few thousand feet above the ground, then little snow, but a significant amount of ice can occur," AccuWeather Senior Meteorologist Brett Anderson said. "Should the cold air resist this warm wedge, then parts of central and northern New England could be buried under a foot of snow or more."

US New Year’s Eve: Where will the weather cause concern or celebration? Beneficial rain will come with the risk for strong thunderstorms across the southern US this weekend Morning fog to pose danger for millions of motorists during last weekend of 2019 Will weather tame the crowd for New Year’s Eve at Times Square 2019?

The primary form of precipitation is likely to be snow for central and northeastern New Hampshire, southwestern Maine and northeastern Vermont. These areas can expect a general 6-12 inches of snow with an AccuWeather Local StormMax™ of 24 inches. Much of this snow may fall during the second part of the storm from Monday night to early Tuesday.

As much as 8 inches of snow had already fallen in Kennebunkport, Maine, as of Monday afternoon, with snow continuing to fall. 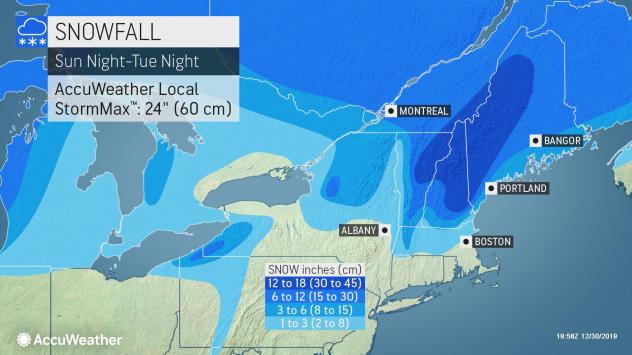 "A change to snow is possible over central New England on the backside as a secondary storm forms, strengthens and drags colder air in," according to AccuWeather Senior Meteorologist Brett Anderson.

The zone from central Massachusetts to southwestern Vermont and northeastern and east-central New York state are experiencing a major ice storm with a buildup on the order of 0.25 to 0.75 of an inch thick that could trigger widespread power outages. 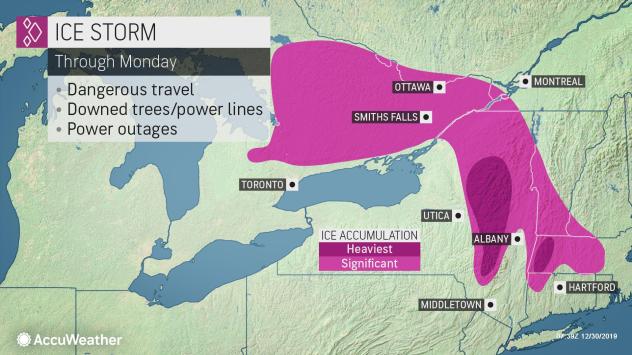 Some of the hardest-hit areas thus far have been the Berkshires and Catskills as well as the Mohawk Valley and the upper Hudson and Champlain valleys.

. @WX1BOX @NWSBoston @NWSAlbany At 9am, radial ice accumulation up to 0.4” at 1725’ at Public Safety Complex in Plainfield, Mass. (Permission hereby given to any media company for use.$ pic.twitter.com/zvie1kboKC

A light glaze of ice had already accrued in Schenectady, New York, by Sunday evening. Trees and power lines were coming down during the midday hours on Monday in the Catskills and Berkshires.

The timing of change to freezing rain and sleet will have implications on snowfall totals across the region. Snow may be falling at the rate of 2 inches per hour around the time of the change for some areas. So where the change occurs rapidly, it can cut down the snow accumulation. If the wintry mix is delayed by a few hours, snow could rapidly pile up.

The band of this icy mess may shift farther to the northeast or southwest, depending on the where the battle zone between the warm and cold air sets up, so it is possible that Boston may receive an icy mix for a time.

Some areas of northern New England will deal with snow and/or ice into Tuesday morning.

What will the weather be like after the storm?

In the wake of the storm, on New Year's Eve, colder air will funnel southeastward from central Canada, across the Great Lakes and into the Northeast. 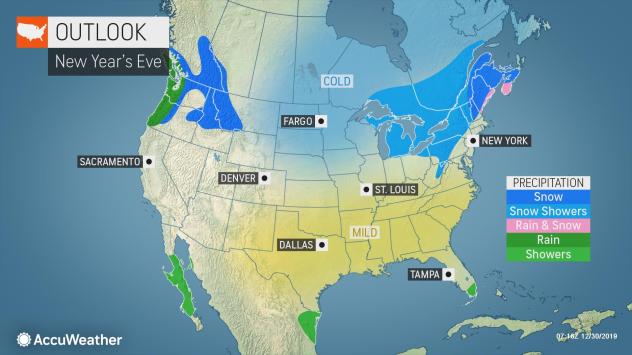 The air will not be as cold as that which blasted the region a few days prior to Christmas, it will be cold enough to trigger some lake-effect snow near the lower Great Lakes and also cause some snow showers to wander through the central Appalachians and New England from Tuesday night to New Year's Day.

Experts urge motorists to be alert once again for rapidly changing weather conditions on the highways from sudden snow showers. Although temperatures will overall be higher during this snow shower event compared to last week's squalls, roads may still become slippery and snow-covered in the span of a few minutes, leading to dangerous conditions.