A couple of very tough months are ahead for the wildfire season and firefighting efforts in the western United States, especially California.

Approximately 110 large wildfires are burning across the U.S., and most of these fires are burning in the West, according to the National Interagency Fire Center. Countless acres of brush, which growth was spurred on by winter and spring moisture, have had all summer to dry out.

Extreme heat, dryness, blazing sunshine and accidental and intentional incidents by humans have already contributed to a formidable fire year. 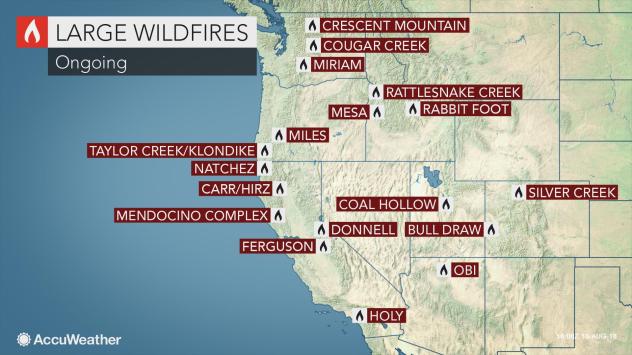 As much as 90 percent of wildfires in the U.S. are caused by humans, according to the National Park Service.

On Monday, Aug.13, it was announced that a firefighter, who was from the Draper City, Utah, Fire Department, was killed while battling the Mendocino Complex Fire. At least six firefighters have died battling wildfires in California this season.

A firefighting plane battling flames in northeastern Washington crashed on Tuesday. The pilot was able to escape and survived.

Even as sunshine and average temperatures decline moving forward into the autumn, episodes of wind traditionally increase during September and October.

Temperatures can still spike to triple-digit levels during the first part of autumn. Temperatures have topped 100 F in Los Angeles well into October, and have climbed into the 90s in San Francisco during October.

In coastal areas of California, extreme temperatures during the late summer and autumn are often accompanied by gusty Santa Ana, Diablo and Sundowner winds.

Even when temperatures are relatively low, gusty winds can still cause a fire to rapidly spread, when the air and brush are dry.

During autumn, weather systems across southern Canada and the northern U.S. tend to get stronger, when compared to the summer. The circulation around these storms and high pressure areas often cause winds to kick up farther south as well.

Multiple soaking rainstorms are needed to alleviate the wildfire danger. Even a fraction of the rain the Eastern and Central states have been receiving would help. However, hope for these types of storms are months away for California, much of Oregon, Nevada and Utah.

While thunderstorms from the monsoon pattern can bring temporary relief, the storms tend to focus on New Mexico, Colorado and parts of Arizona and are too widely scattered to provide relief in a general sense.

A tropical system that tracks far enough to the north to wrap drenching rain across California is a long-shot, even for a busy eastern Pacific hurricane season.

How forest fires play an essential role in natural life cycles of plants, wildlife
How inhaling wildfire smoke can wreak havoc on your health
Why it’s dangerous, harmful for the public to fly drones above wildfires
How destructive wildfires create their own weather

Recurring drought and humid activity have essentially extended the fire season to a year-round concern.

Eventually, lower temperatures later in November and December should offer some relief, even in absence of any major rainstorms. Episodes of wind and temperature spikes could still bring periodic fire weather, however.

While this winter may bring El Niño conditions, there is no guarantee that drenching rain will fall in all areas in need over the western U.S.

Nationwide, more than 30,000 personnel, including 13,000 in California alone, were battling wild land blazes as of the middle of August, according to the National Interagency Fire Center. 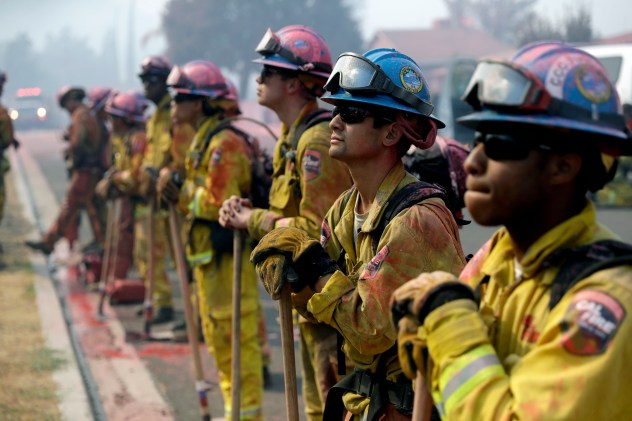 Fire crews line up as they watch a wildfire on a ridge top while protecting a residential area Friday, Aug. 10, 2018, in Lake Elsinore, California. (AP Photo/Marcio Jose Sanchez)

The great number and size of the existing fires are producing a vast area of smoke.

Light winds and heat tend to trap the smoke in populated areas.

"The current smoke event is delivering the longest period of unhealthy air quality since Environmental Protection Agency record began in 2000," according to the National Weather Service in Medford, Oregon. 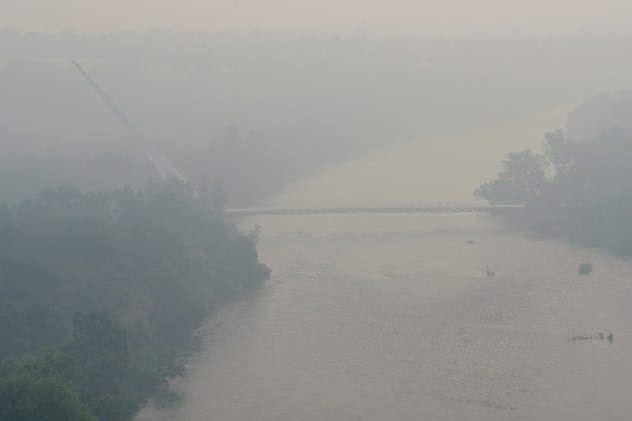 An aerial view shows the smoke and limited visibility caused by a wildfire that swept through the area at the Sundial Bride on Friday, Aug. 10, 2018 in Redding, California. (AP Photo/Michael Burke)

There have been 18 days with unhealthy or worse air quality in Medford during 2018 as of Aug. 15.

In the short-term, heat will again build across the Northwest. Overall winds will be light the first part of this week, compared to the gusty winds that accompanied the cooler air from this past weekend.

There is the potential that a small southward dip in the jet stream could substantially kick up winds in parts of Washington, Oregon, Northern California and northwestern Nevada during the middle to latter part of this week. 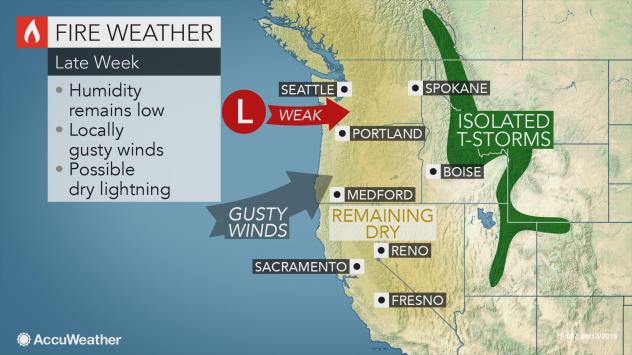 Meanwhile, in the Southwest, temperatures will remain near to slightly above average this week. While conditions may be slightly better than the extreme heat from last week in terms of firefighting efforts, the risk of wildfire ignition and spread will remain high.

No big breaks in the fire weather are foreseen in the short term and in the long range.