As firefighters continue to get the upper hand on the blazes charring Northern California, much-needed rain and cooler air are set to descend over California later this week.

The weather pattern to come will be a complete 180-degree turn when compared to the stretch of hot, extremely dry and windy conditions that fanned large and deadly blazes.

In the past week, massive wildfires charred more than 245,000 acres across California, according to Cal Fire. The death toll remains at 41. It is estimated that over 5,700 homes and other structures have been destroyed with much of the devastation in Northern California. 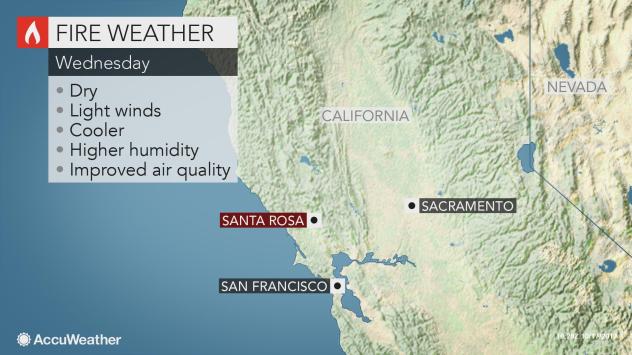 A reduction in the winds from this past weekend has helped firefighters gain ground on the destructive fires. The containment is up to 50 percent or more for most of the dozen large blazes that continue to burn.

The fire has forced the evacuation of the Mt. Wilson Observatory, according to KABC-TV.

Despite winds slackening, Tuesday is shaping up to be another dry day with above-normal warmth across most of California.

The wildfire danger has been raised for Tuesday afternoon from near Point Conception and the southern San Joaquin Valley due to a few thunderstorms set to move through. These thunderstorms may drop little rainfall but will still produce lightning that can spark new wildfires amid the dry vegetation. 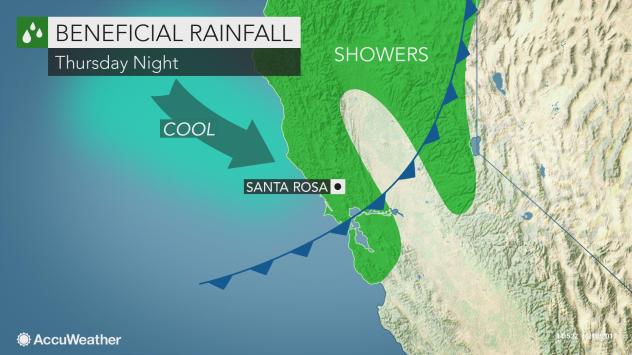 However, a gradual reduction in high temperatures and an increase in humidity into midweek along the Northern California coast is a sign of better weather for firefighters and the wildfire situation.

“Much of Northern California can expect an influx of cloudy, cooler and wetter weather to move in late this week,” AccuWeather Meteorologist Faith Eherts said.

A band of showers is expected to move through the wildfire-ravaged areas of Northern California on Thursday night.

"It will rain a bit but not enough to fully douse the blazes," AccuWeather Senior Meteorologist Ken Clark said. "The biggest advantage to firefighters will be the increase in humidity and lower temperatures."

A shift in the wind will also help to push smoke east of Santa Rosa, allowing air quality to improve. However, the smoke may instead be steered over the Sacramento Valley.

Rain could change to snow across the northern Sierra Nevada, posing troubles for travelers but coming at the delight of skiers eager to get on the slopes.

Temperatures will plunge from the 80s and 90s F to the 60s and 70s across a large portion of the state in the unsettled pattern.

For the most part, the pattern change will be good news for the region. However, there may be a few setbacks. 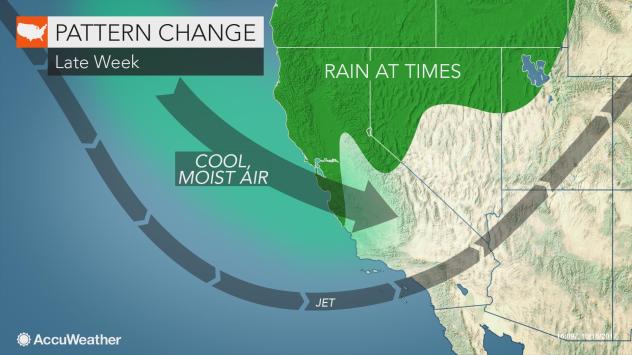 Winds are also expected to increase ahead of and during the storm, which could fan ongoing blazes for a time, according to Eherts.

Rain is expected bypass the moderate drought areas of Southern California, but a trend toward higher humidity and lower temperatures will also aid firefighters later this week.

The weather later this week is not a sign of things to come for the end of California. A return of extremely dry air, heat and areas of gusty winds is expected to once again raise the wildfire danger early next week.