Tropical storm may aim for Gulf, perhaps flood portions of southern and eastern US next week

A broad area of showers and thunderstorms, currently over the Caribbean Sea, will drift into the Gulf of Mexico and may organize into a tropical depression or storm later this weekend and into next week.

Slow-moving and repeating downpours will continue the threat of flash flooding and mudslides into this weekend from Nicaragua, Honduras, Guatemala, Belize and southeastern Mexico to Jamaica, Cuba, Haiti, the Dominican Republic and Puerto Rico as well as the U.S. and British Virgin Islands.

During this weekend, as the mass of downpours begins to drift, an uptick in downpours is likely to spread over the Yucatan, Cuba and perhaps the Bahamas.

"This disturbance will move to near the Yucatan Channel between the Yucatan Peninsula and western Cuba by late Sunday, then move into the southern Gulf of Mexico or over the northern Yucatan on Monday," according to AccuWeather Hurricane Expert Dan Kottlowski. 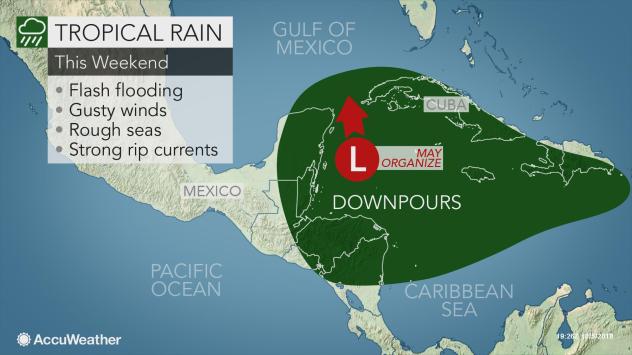 Along its journey from the northwestern Caribbean to the central or eastern Gulf of Mexico, the disturbance may strengthen into a tropical depression or storm.

The next name on the list of tropical storms for the 2018 Atlantic hurricane season is Michael.

Fishing, shipping and petroleum interests in the Gulf of Mexico and coastal areas throughout the Gulf should monitor the progress of this tropical disturbance.

"Climatologically speaking, odds favor that a storm emerging from the northwestern Caribbean will track toward the northeastern Gulf of Mexico rather than the Texas coastline this time of year," according to Kottlowski. 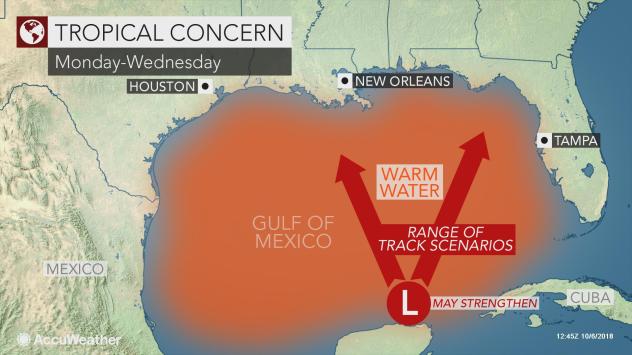 Even in lieu of a tropical storm or hurricane, tropical moisture will be drawn northward and then northeastward.

The downpours and the feature of interest are likely to be steered around a large area of high pressure that will build through many layers of the atmosphere and anchor along the southern Atlantic coast next week.

AccuWeather’s US winter forecast for 2018-2019 season ‘There would be no natural disasters if it were not for humans:’ Understanding our planet’s hazards, risks Leslie may live on, stir seas over central Atlantic into mid-October Resilient North Carolina farmers face substantial recovery after Florence left billions in damage

This high pressure area will be responsible for summerlike warmth persisting in much of the South and parts of the Northeast into mid-October.

Risk of renewed flooding in southern, eastern US

It is the clockwise flow of air around the high that will guide the tropical feature into the Gulf of Mexico and then perhaps northeastward through the eastern third of the nation into the middle of October.

The storm alone can spread flooding rain across a part of the South, but the flood risk may expand well away from its track as another system comes into play.

"The tropical feature is likely to interact or be absorbed by a non-tropical storm later next week," according to AccuWeather Senior Meteorologist Joe Lundberg.

"As this merge occurs, a copious amount of rain may fall, which could renew flooding problems in parts of the South and perhaps portions of the Northeast," Lundberg said.

Many portions of the eastern U.S. are on track for a top-10 wettest year on record, and some are coming off their wettest summer on record.

Unusually high river and small stream levels, combined with soggy ground in parts of the East, are a perfect recipe for renewed flooding this autumn should any tropical or moisture-rich non-tropical storm to come calling.

Download the free AccuWeather app to stay up to date on any tropical concerns and weather hazards for your area.