A coach bus fell into a sinkhole in Thessaloniki, Greece, as Storm Ballos swept through the area on Oct. 15. No one was injured in the incident.

A large storm system dumped more than a month's worth of rain in the Greece capital of Athens on Thursday, prompting closures and flooding streets. In another Greek city, torrential rain led to a dramatic rescue when a bus tumbled into a large sinkhole.

The storm, which began to impact the country on Thursday, was named Ballos by Greece’s National Meteorological Service.

As an area of low pressure intensified over the Mediterranean Sea, it pulled moisture northward and into Greece, which led to heavy rain, according to AccuWeather Meteorologist Rob Richards.

"Southeast Europe typically see storms like this during the late fall and winter months, so Storm Ballos arrived earlier than normal for the region and unloaded an impressive amount of rain,” Tyler Roys, AccuWeather senior meteorologist, said. He added that a storm system unleashed heavy rain and left the ground saturated just a few days earlier and additional rain quickly caused flash flooding.

The previous storm, which was given the name Athena, caused destruction due to flooding in the fire-ravaged North Evia, according to Greek Reporter, a media outlet that covers Greece through a national lens.

As the storm last week pumped copious amounts of moisture into the region, torrents of rain fell in parts of the country. On Thursday alone, 2-4 inches (50-100 mm) of rain fell in Athens. The city typically sees about 2 inches (50 mm) of rain during the entire month of October. Heavy rainfall led to widespread flooding, power outages and road closures.

Video emerged of a flea market at Monastiraki in central Athens that looked more like a raging river.

Even heavier rain fell in western Greece with Corfu picking up 5.50 inches (140 mm) during the 24-hour period from Thursday morning to Friday morning.

Christos Stylianides, the minister of Climate Crisis and Civil Protection, recommended that both public and private sector employees switch to teleworking on Friday in an effort to limit the risk posed by extensive flooding, according to local media.

In the city of Thessaloniki, which picked up a little over an inch (25 mm) of rain during the day on Thursday, a roadway caved in as a massive sinkhole opened up. A bus carrying 15 people partially fell into the hole, though no injuries were reported, according to THESS News. A large crane was used to lift the bus out of the sinkhole -- and the whole ordeal was caught on camera. 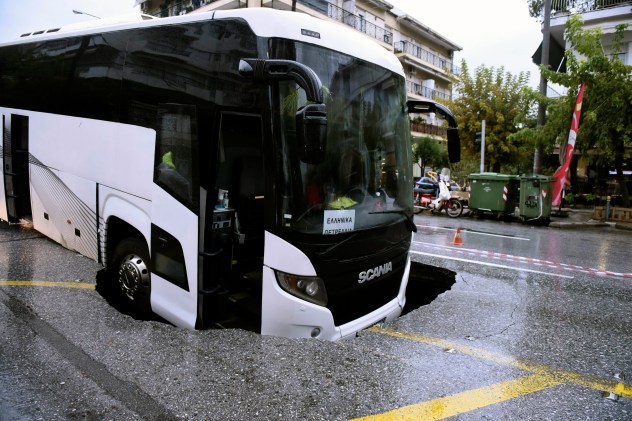 Ballos did ultimately turn deadly when a 70-year-old man was swept away by the floodwaters. According to Greek Reporter, the man called the emergency services on Thursday to say that he was in a pasture surrounded by water from an overflowing torrent.

In addition to the flooding rainfall, Ballos brought the first snow of the season to some of the mountainous areas in Northern Macedonia. Images from the Greece City Times show a wintry landscape with up to 6 inches (15 cm) accumulating in elevations over 3,600 feet (1,100 meters).