As of 6:43 a.m. CDT Wednesday, this reports story is no longer being updated. Click here for the current reports on Michael.

The Gulf Coast is making its final preparations ahead of major Hurricane Michael, which will impact the region at midweek.

As of early Wednesday morning, Michael is a major Category 4 hurricane with maximum sustained winds of 140 mph. The storm is centered roughly 130 miles southwest of Apalachicola, Florida and is moving north at about 13 mph. 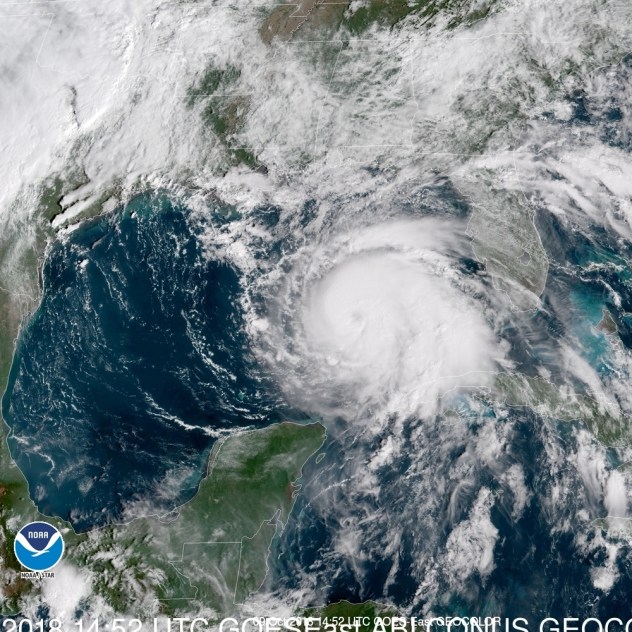 Mandatory evacuations are in effect along much of Florida’s northern Gulf Coast.

A state of emergency has also been ordered in Alabama and Georgia as people across the region brace for life-threatening impacts.

‘It will look like a bomb or tsunami hit the area’ where Category 4 Hurricane Michael makes landfall in Florida
State of emergency declared in Florida, Alabama as storm preparations begin for Hurricane Michael
5 deadliest hurricane-related dangers
Why you should evacuate ahead of a hurricane
5 potentially dangerous hurricane preparation myths debunked
5 expert tips for protecting your home against hurricane damage

The storm is expected to bring sustained winds of 80-100 mph with gusts of 120-160 mph to parts of the Florida Panhandle, mostly within 40 miles of where Michael makes landfall on Wednesday afternoon. The strongest gusts are likely just to the east of the center. This will lead to widespread tree and structural damage.

There may be prolonged power outages that could last for several days after Michael moves away. Wind damage will be on a more localized level as Michael moves across the Carolinas and Virginia. However, any weakened structures left behind from Florence will be at the highest risk for damage.

Continued cleanup efforts in the wake of Florence may be severely impacted. Unlike Florence, Michael is expected to move quickly through the Southeast, which will produce lower rainfall totals. Regardless, the risk for flooding may still become severe and life-threatening.

A tornado watch has been issued for portions of the Florida Panhandle and southwestern Georgia until 5:00 p.m. EDT Wednesday. The area includes Panama City, Apalachicola and Tallahassee, Florida, and Albany and Valdosta, Georgia.

In addition to producing flooding rainfall, Michael's outer bands can briefly spin up damaging tornadoes. This tornado risk will expand into more of Georgia and the Carolinas late Wednesday into Thursday.

A tornado watch has been issued for parts of Florida and Georgia until 5 PM EDT pic.twitter.com/UmgzXNt2dO

Rain is beginning to fall in Panama City, Florida, as dangerous Michael approaches the coast.

Michael has intensified to a Category 4 hurricane with maximum sustained winds of 130 mph. Further intensification may occur prior to the storm making landfall near Panama City, Florida, around midday Wednesday. 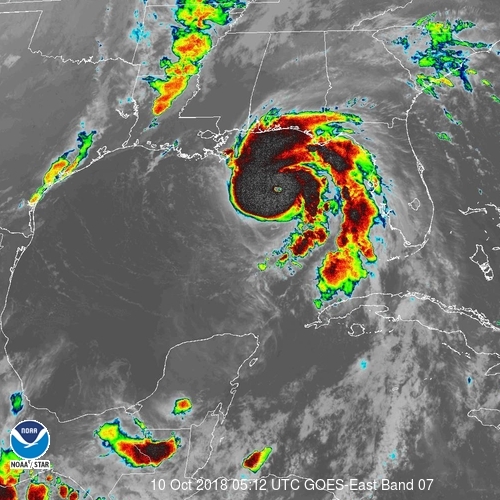 The outer rainbands of Michael are already approaching the Florida Panhandle. Conditions will only deteriorate across the panhandle as Wednesday progresses.

Michael is now expected to make landfall as a Category 4 hurricane around midday Wednesday. 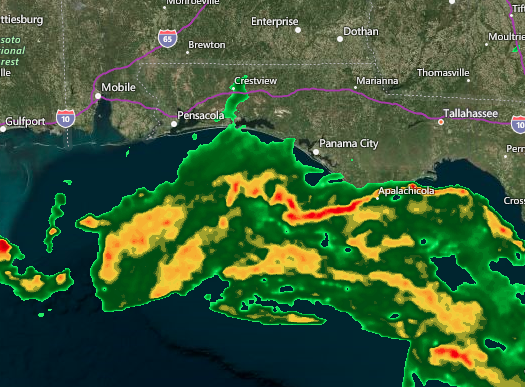 The Georiga Department of Transportation has enacted more heavily concentrated Coordinated Highway Assistance & Maintenance Program (CHAMP) on I-75 near the Georgia and Florida border.

In preparation for Hurricane Michael, GDOT has enacted more heavily concentrated CHAMP patrols on I-75 near the Georgia/Florida border. pic.twitter.com/9pHqpCVNAL

FEMA suggests having a few different destinations in mind and check with state and local authorities for the latest on road closures before you drive.

“The one thing I want to make sure folks understand is that the facilities that are being opened are evacuation centers so they don't have cots, food and water; they are meant to safely house people for 72 hours until the storm passes," Vice President of Operations and Logistics for the American Red Cross, Brad Kieserman said.

Once the storm passes, the Red Cross will work with the state and counties to determine what areas have populations displaced and require emergency shelters and those are the ones that have cots and blankets.

Kieserman said anyone who is planning on staying in a red cross shelter for evacuation purposes over the next 72 hours should plan to bring prescription medications, pillows, blankets, hygiene supplies, important records.

If you're evacuating for #Michael, have a few different destinations in mind & check with state/local authorities for the latest on road closures before you go.

Michael has been upgraded to a major hurricane with maximum sustained winds of 120 mph. Michael could continue to strengthen before making landfall along the coast of the Florida Panhandle on Wednesday afternoon.

Only hours remain for people across the Florida Panhandle to prepare and evacuate before Hurricane Michael begins to impact the area.

Florida Gov. Rick Scott is telling Florida residents to listen to all warnings from local and state officials as Michael approaches.

Hurricane Michael will be here TONIGHT. This is your LAST CHANCE to get prepared for this monstrous and deadly storm. The state is not taking this storm lightly and neither should any family.

President Trump has approved an emergency declaration for Florida ahead of Hurricane Michael.

The declaration orders federal assistance to supplement state and local response efforts due to the emergency conditions resulting from Hurricane Michael beginning on Oct. 7 and continuing.

Several schools and universities across the southeastern U.S. have closed or plan to close in advance of Hurricane Michael.

Many Florida schools, including Florida State University, closed Tuesday and announced they will remain that way until at least Thursday.

Local news stations report that several schools in southern and central Georgia would close through at least Thursday.

Other areas along the Florida Gulf coast have reported high tide and coastal flooding.

About 100 Kentucky Power employees and contractors are traveling to Florida to assist Gulf Power and Duke Energy Florida with any outages from Hurricane Michael.

Gulf Power and Duke Energy Florida are preparing for the storm's arrival.

There are 3,000 Gulf Power crews already on standby, and an additional 1,000 have been requested. Widespread electricity outages are expected with the storm, and the hardest-hit areas could have over seven days without power.

“Customers should prepare for the possibility of losing power for an extended period when tropical storm to hurricane force winds and storm surge or flooding occurs,” Gordon Paulus, Gulf Power spokesperson, said.

Duke Energy is also urging for customers to prepare for the storm.

Fuel is a top priority, and we will be monitoring it throughout the day. @FLSERT has been holding regular calls with the fuel industry and ports in FL to ensure they can get gas to the impacted areas safely.

If the hurricane intensifies and stays on the course forecast by the NHC, storm surge impacts are likely to be most severe in the panhandle region east of the eye, where surge- and wave-induced water levels could rise 16 to 20 feet, the USGS predicted.

In the open Gulf of Mexico, Hurricane Michael’s wave heights are predicted to be as much as 40 feet, said research oceanographer Kara Doran, leader of the USGS Coastal Change Hazards Storm Team based in St. Petersburg, Florida.

“As the storm approaches the coast, the shallow sea bed will reduce that wave height somewhat,” Dorn said. “But water levels in some parts of the eastern Florida Panhandle coast will still be high enough to overwhelm the dunes, which are relatively low and narrow.”

Panama City Beach residents are preparing themselves for the impacts of Michael.

Homes and businesses are boarding up across Florida's Big Bend and Panhandle.

Residents have also started to evacuate.

The good news is that people are heading out. Thanks for taking the advice to leave and prepare. While on the road take your time and expect Bumper to Bumper traffic on 331 NB in Walton County @weartv @WCSOFL pic.twitter.com/DMGIE0J5Kl

It’s a lonely road down to Panacea. Not many heading south and the main drag of town is completely deserted. #hurricanemichael pic.twitter.com/j3Te423g6l

President Donald Trump says he's spoken to Florida Gov. Rick Scott and "everybody you need to speak to" about Hurricane Michael.

"We are very well prepared for the incoming hurricane," he said. "FEMA is ready, we're all ready."

Trump tweeted ahead of Michael.

I have now activated 2,500 @FLGuard troops and the FL Highway Patrol is making nearly 350 troopers available for deployment. They are standing by ready to respond to the storm.

Energy companies on Monday halted nearly a fifth of Gulf of Mexico oil production and evacuated staff from 13 platforms as Hurricane Michael intensified and headed for a path up the eastern U.S. Gulf, according to Reuters News.

In Panama City Beach, more than half of the airport's 16 arriving flights have been canceled and half of its 16 departing flights were canceled.

The Pensacola International Airport announced that it will be closed starting at 12:01 a.m. EDT Wednesday due to Hurricane Michael.

"Hurricane Michael is a monstrous storm," Scott said at the morning press briefing from the Florida State Emergency Operations Center. "We are 100 percent ready."

Ahead of the storm, the Governor says he's spoken with President Trump and FEMA Administrator Brock Long. He's already issued states of emergency for 34 Florida counties.

Mandatory evacuations are in effect along much of Florida’s northern Gulf Coast, stretching from the Panhandle into the area known as the Big Bend.

See my update on Hurricane Michael from the State Emergency Operations Center this morning - https://t.co/G8rrTPm5aT pic.twitter.com/JOdMVMOOhu

Hurricane Michael strengthened to a Category 2 hurricane with maximum sustained winds of 100 mph, gusting to 115 mph.

Michael continues to strengthen while moving north-northwestward over the southeastern Gulf of Mexico. The hurricane will bring life-threatening storm surge, hurricane-force winds and heavy rainfall along the northeastern Gulf Coast.

Snapper Tams captured video of the storm's impacts on the Royal Caribbean’s Empress of the Seas. The ship is riding out the outer bands of Hurricane Michael.