Oroville Reservoir, the second largest water reservoir, dropped to a record low of 643 feet on Aug. 3, as long-term drought continues to grip the region.

Lake Oroville, California's second-largest reservoir, looks like a shell of its typical self as the drought across the western United States continues to toast the region.

The reservoir has hit a record low level, dropping to just 641.2 feet above sea level; the former record low of the lake was 645.11 feet, recorded on Sept. 7, 1977. At its current pace, Lake Oroville is dropping roughly a foot a day, as water is released from Oroville Dam to meet water quality and wildlife requirements downstream.

Perhaps most troubling, the operations of Lake Oroville's hydroelectric power plant have been suspended, which happens when the lake reaches the 630- to 640-foot level. At full operation, the hydroelectric power plant can power up to 800,000 homes, according to reporting from KPIX. It is not clear what effect of the shutdown will have on the supply or price of electricity, reported the San Francisco Chronicle.

Drone footage captured by Live Storms Media's Brandon Clement this week shows the exposed shoreline surrounding the lake and dam, revealing how far the critical reservoir has dipped from its usual height. The dry and dusty hues of the dirt surrounding what remains of the reservoir make the lake look more like a river canyon. 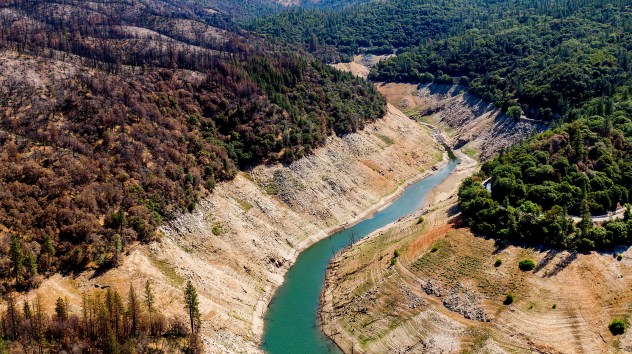 Dry banks rise above water in Lake Oroville in May. At left are trees scorched in the 2020 North Complex Fire. (AP Photo/Noah Berger)

Boats in the lake are packed in, anchored in the only spots in the lake that are deep enough. Instead of a serene lake scene, the lake looks more like Los Angeles' Interstate 405, with boats instead of cars in a massive traffic jam. recent years, the closest the lake has been to full capacity was slightly over two years ago, when the lake reached 98% capacity, or 896 feet, reported KQED. 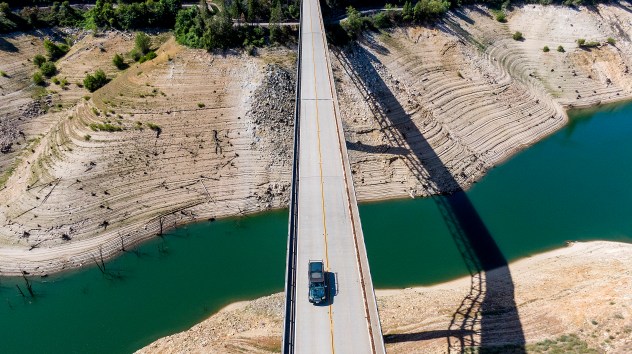 A car crosses Enterprise Bridge over Lake Oroville's dry banks. At the time of this photo, the reservoir was at 39 percent of capacity and 46 percent of its historical average. (AP Photo/Noah Berger)

Other reservoirs across the state are significantly below their maximum capacity. San Luis Reservoir, outside of San Fransisco, is just 19% full. The largest reservoir in the state, Lake Shasta, is only 31% full.

More than 88% of California was in the grips of extreme or exceptional drought — the two highest categories listed by the U.S. Drought Monitor.

MORE ON THE RECORD DROUGHT:

Weather News Millions of salmon being trucked to cooler water amid Calif. drought