On Sunday, Feb. 16, in Grand Rapids, Michigan, the waves at the beach interacted with the ice in an interesting way, creating ice volcanoes.

On Sunday, temperatures teetered on the edge of freezing, the blistering wind was relentless and grey clouds spotted the sky -- making it the perfect weather to visit Oval Beach on the eastern shore of Lake Michigan.

Beachgoers feeling adventurous who decided to take a stroll along the beach in the taxing weather conditions may have been rewarded if they were lucky enough to get a glimpse of a peculiar weather phenomenon.

"It was a great day to visit the beach and watch the waves interact with the ice. Here’s a couple of ‘ice volcanoes’ erupting at Oval Beach on Sunday, February 16, 2020," the post said.

The odd formations sat on the beach, close enough to the waterline to collect the spray of the crashing waves but far enough back to not be caved in. As the waves rolled in, water spouted from the cone at the top, giving the impression of an eruption.

"'Ice volcanoes,' which resemble blowholes you may see in Hawaii or the Caribbean, develop as waves crash against the ice shelf with the spray freezing in layers vertically," AccuWeather Meteorologist Matt Benz said. "This freezing action can form a mound with a conduit that forces the waves' energy vertically, sometimes as columns of water that appear to look like a volcanic eruption."

A few stars have to align before these unique structures can appear, however.

"It’s almost a 'Goldilocks' situation where you need just the right conditions over a period of time to get these to develop," Benz said.

Those conditions typically revolve around having a large body of water, moderate wave action and below-freezing temperatures, according to Benz. Freezing temperatures allow ice shelves to form and the waves need to be large enough to break against them, building onto the structure as the water freezes. 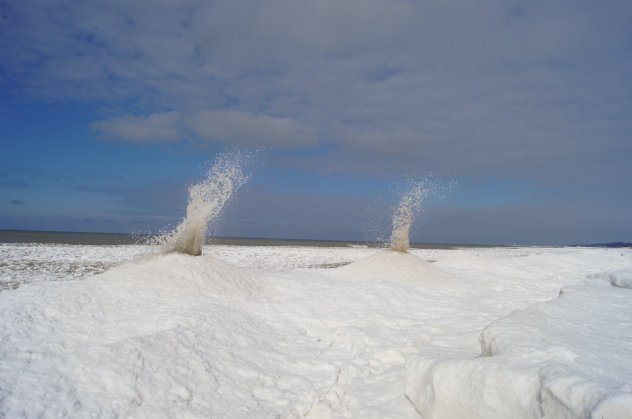 "Ice volcanoes" formed on Oval Beach, Michigan, after a few days of temperatures dipping below freezing and winds gusting up to 30 mph. (Twitter/@NWSGrandRapids)

These ice structures are common on the typical downside of a lake, which would have persistent wave action against the shore from onshore winds, Benz said.

The weather occurring around the ice volcanoes can not only aid in forming them, but shape them as well.

"These things are constantly evolving with the wind and waves," Benz said. "A certain wave angle may mean an ice volcano may be in one spot one day, but another may develop elsewhere as the wave angle changes. In short, it's a constantly changing winter landscape, which makes each feature unique in its own right."

The conditions of the wind and waves can also determine how long it takes for an ice volcano to form.

In Holland, Michigan, the closest reporting spot, temperatures had been below freezing for most of the day on Feb. 15, though the temperatures rose above freezing in the evening, Benz said. Temperatures then fell before back into the lower 20s by the morning of Feb. 16 before recovering above freezing by the afternoon.

As for the winds, the area had a predominant southwest to west-southwest wind on Feb. 15, gusting up to nearly 30 mph. On Feb. 16, the wind was almost due west, which Benz said would have been "ideal for pushing waves right into the shoreline at this location." 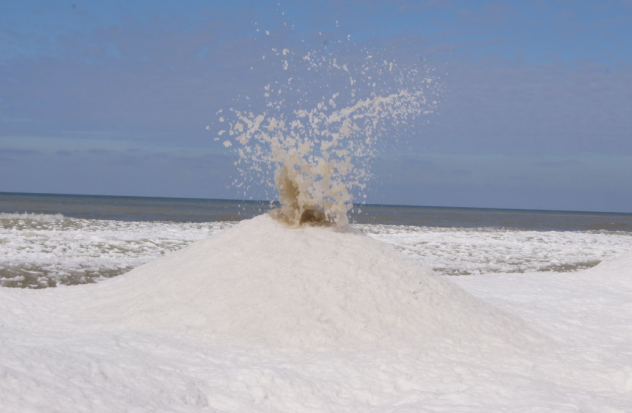 An ice volcano "erupts" on the shore of Oval Beach, Michigan. There is an entrance under the ice for the water to enter as the waves come in, the water then funnels up to the spout. (Twitter/@NWSGrandRapids)

A second important factor is the location of the body of water.

These structures form in large lakes with water that stay open in the winter but with temperatures below freezing for long periods of time, such as the Great Lakes. If anything, these formations are nearly unique to the region because of the size of the bodies of water and the temperatures the region weathers during the winter.

"While this type of ice could develop on large lakes, most lakes outside of the Great Lakes in the US tend to freeze up before you can accrete enough ice along the beaches," Benz said.

Though the ocean may come to mind as another location where these could occur, Benz said that it is typically more difficult since saltwater needing colder temperatures to freeze compared to freshwater and wave action could be too extreme, breaking any forming ice shelves.

While the ice volcanoes are a sight to see, they can be dangerous if approached.

"Cracks in the ice along with the ice volcano itself quite often lead right to water if a person falls in," Benz said. Depending on how high the surrounding ice is, it may be difficult to climb back out without help.

"If you're lucky enough to see this unique weather phenomenon, enjoy it safely from the shore!"

The Great Lakes have also been known to produce other ice formations such as ice pancakes and ice balls.

"It's all about temperatures," Benz said.

"On larger bodies of water, it's difficult to truly see ‘calm’ water, so slight wave action or any movement of water helps keep the ice from freezing into a giant sheet of ice," Benz said. "When the air is cold enough, moisture from the open water around the ice will either freeze to the top edges of the ice, or water vapor escaping from the surface of the water goes through the process of deposition and can create frosty structures on and around the edges of the ice." 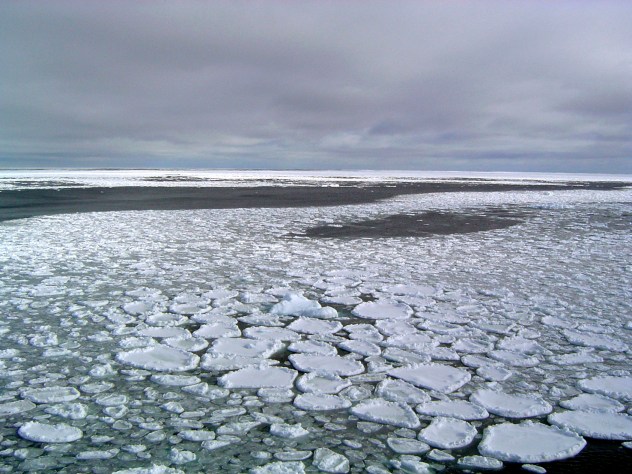 This January 2017 photo provided by Ted Scambos shows sea ice on the ocean surrounding Antarctica during an expedition to the Ross Sea. (Ted Scambos/National Snow and Ice Data Center via AP)

The creation of ice balls is a bit more simple.

"Ice balls occur through wave action as objects become cocooned in ice through the process of repeatedly being covered with water, then exposed to cold air, and rolling up and down the beach," Benz said.

The size then depends on the amount of wave action there is and how long it persists.