We're not taking away your gas stove, regulator tells CNN

A U.S. Consumer Product Safety commissioner set off a firestorm this week by suggesting the agency could ban gas stoves because they have been linked to childhood asthma.

A recent report came out in December that found 12% of childhood asthma cases are linked to the gasses produced when you turn on a gas stove. FOX 26 Consumer Reporter Heather Sullivan explains more about the safety concerns with gas stoves.

(CNN) -- The federal government isn't going to take away your gas stove, a top consumer regulator told CNN on Wednesday.

Richard Trumka Jr., a U.S. Consumer Product Safety commissioner, set off a firestorm this week by suggesting the agency could ban gas stoves because they have been linked to childhood asthma.

Trumka confirmed to CNN that "everything's on the table" when it comes to gas stoves, but stressed that any ban would apply only to new gas stoves, not existing ones.

"We are not looking to go into anyone's homes and take away items that are already there. We don't do that," Trumka said. "If and when we get to regulation on the topic, it's always forward looking. You know, it applies to new products. Consumers always have the choice of what to keep in their homes and we want to make sure they do that with full information."

There are increasing health concerns about indoor pollution linked to gas stoves.

Trumka pointed to a December 2022 study in the International Journal of Environmental Research and Public Health that found indoor gas stove usage is associated with an increased risk of current asthma among children. That study found almost 13% of current childhood asthma in the United States is attributable to gas stove use.

For now, Trumka said, CSPC has not "coalesced" around a solution and is still gathering information and preparing to ask for public input.

"We try to look at ways to make things safe. That is goal one. And if we can do that, that's fantastic. But every option, if we fall short of that, is on the table," Trumka said. 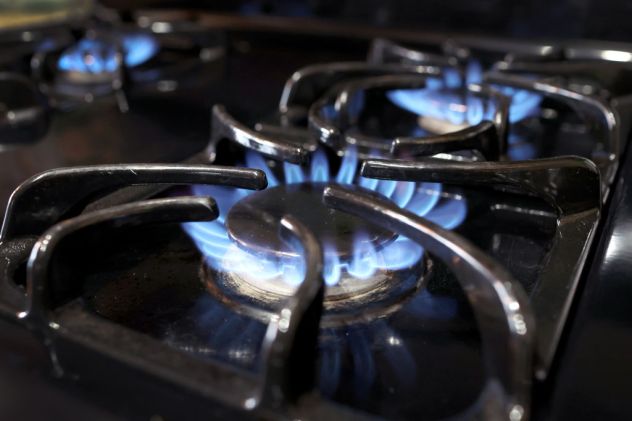 A December 2022 study in the International Journal of Environmental Research and Public Health that found indoor gas stove usage is associated with an increased risk of current asthma among children. (Photo Illustration by Scott Olson/Getty Images)

The CSPC commissioner also pointed out that consumers who wish to switch from a gas stove to an electric one are eligible to a rebate of up to $840 through the Inflation Reduction Act.

Trumka did not retract his comments to Bloomberg News earlier this week where he said that "products that can't be made safe can be banned."

Manchin slams as 'recipe for disaster'

Those remarks set off controversy among more conservative lawmakers.

"This is a recipe for disaster. The federal government has no business telling American families how to cook their dinner," Democratic Sen. Joe Manchin of West Virginia said on Twitter on Tuesday. "I can tell you the last thing that would ever leave my house is the gas stove that we cook on."

Trumka responded directly on Wednesday, telling CNN: "I have no intention of coming for Senator Manchin's... any of his items."

"I'll NEVER give up my gas stove," Jackson tweeted on Tuesday. "If the maniacs in the White House come for my stove, they can pry it from my cold dead hands. COME AND TAKE IT!!"

Trumka, who President Joe Biden nominated in 2021 to serve on the CPSC, responded in the interview.

"First, let's not blame anybody in the White House. If there's a maniac, um, sorry," he said, emphasizing that Americans have the freedom to make their own choice and CPSC regulates manufacturers, not consumers.

Alexander Hoehn-Saric, the agency's chairman, also issued a statement on Wednesday noting that research indicates emissions from gas stoves "can be hazardous" and the CPSC is looking for ways to "reduce related indoor air quality hazards."

"But to be clear," Hoehn-Saric said, "I am not looking to ban gas stoves and the CPSC has no proceeding to do so."

Instead, he said the agency is researching gas stove emissions and exploring ways to address potential health risks, including by asking the public this spring to provide information.

What can consumers do now?

The American Gas Association, an industry trade group, put out a statement on Tuesday saying that "attempts to generate consumer fears with baseless allegations to justify the banning of natural gas is a misguided agenda" that would "saddle vulnerable populations with significant costs."

Trumka responded by saying the AGA has a "vested interest in keeping things the same and we are trying to educate the public right now."

Consumers who are concerned about gas stoves in their home can take precautions. Trumka urged those with gas stoves to ensure the exhaust hood is vented to outside the home, not being routed back into the home.

"We've been hearing that so many people's exhaust tubes don't adequately ventilate," he said.

If the exhaust is not vented outside the home, Trumka said gas stove users should open a window or turn on a fan to clear the air.