He learned to scuba dive at age 4, went on his first expedition at 7. The grandson of the legendary ocean explorer Jacques Cousteau wants to create the International Space Station of the deep sea.

Fabien Cousteau, an ocean conservationist and grandson of legendary ocean explorer Jacques Cousteau, is undertaking a mission to build the equivalent of the International Space Station for Earth's oceans.

Describing Earth’s vast oceans as the “great barometer” for weather patterns, the grandson of legendary French ocean explorer Jacques Cousteau has embarked on an ambitious underwater mission that could lead to the collection of better real-time data.

Fabien Cousteau, 54, a documentary filmmaker and ardent oceanographer in his own right, is spearheading a multimillion-dollar effort to build a state-of-the-art network of underwater laboratories around the world -- the equivalent of the International Space Space but in the depths far below.

“Being able to gather weather data from down below the blue veneer will give us a much more comprehensive data set to make better decisions to mitigate storm surges, to save potentially lives, not days or weeks, but months and possibly longer by looking at the conveyor belts of currents underwater,” said Cousteau, who spent many years during his youth aboard his grandfather’s famed Calypso research vessel.

Spending entire weeks underwater, he believes, can provide scientists with a constant stream of data and samples to aid a multitude of science fields and research, not just meteorology.

But Cousteau is also on a personal quest to fulfill his lifelong dream of living underwater -- a feat his adventurer grandfather had also envisioned.

Cousteau and his Proteus Ocean Group hope to install the first of 3 lab stations and habitats in a marine-protected area off the coast of Curacao, an island in the Caribbean Sea, at the end of 2025. 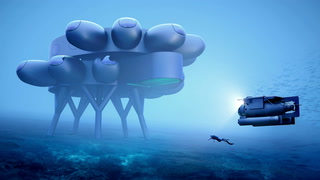 The concept design for the Proteus undersea habitat and lab station, one of three planned to be installed around the world, beginning in 2025. (Fabien Cousteau/Concept designs by Yves Béhar and fuseproject)

“We're pushing really hard to do that,” Cousteau told AccuWeather Prime host and meteorologist Adam Del Rosso, noting that the COVID-19 pandemic has delayed the project.

Besides advancing climate science, other research projects the station scientists hope to explore are the biochemical structures found only underwater that Cousteau foresees possibly leading to new cures and treatments -- “to dig up some answers and maybe some solutions to say viral pandemics, for example,” or cancers, according to Cousteau.

At about the size of an average house and with room enough for up to 12 scientists, the stations will allow scientists to spend days, weeks, maybe even months, at a time underwater due to multiple atmospheres of pressure as opposed to a submarine or a space station, he explained.

Instead of "the pressure that we all are subject to on land, we're going to immerse people in a saturated environment so that not only can they be inside the habitat, but it allows for them the freedom of wandering outside the habitat for hours and hours at a time before coming back to rest and to eat and to do their science inside,” said Cousteau, who as the son of Jacques Cousteau's eldest son, Jean-Michel, learned to scuba dive at age 4 and accompanied the elder Cousteaus on expeditions at age 7. Jacques Cousteau died at age 87 in 1997.

The stations will also feature an area for hydroponics and a medical bay in the event of emergencies.

The other two locations have yet to be released.

“We're looking at being strategic in placing these habitats in places that will give us a network to be able to collect data so that we can make better decisions [in] real-time all over the world.”

And like the ISS, the Proteus station will be a modular facility.

The stations, Cousteau explained, will be “very much based on the pioneering efforts of yesterday, meaning some of the underwater habitats that my grandfather and others have built in the past, so we'll be standing on the shoulders of giants, but we'll be addressing modern needs and the future of ocean exploration” by integrating a modular system that can be upgraded.

Several submarine units or habitats were built from the 1960s to the 1980s. In fact, his grandfather helped develop one of the first such habitats, known as Conshelf, in 1962, a two-person habitat about 33 feet below the surface off the coast of Marseilles, France (His Conshelf II and III soon followed).

But only one functioning facility remains: the Aquarius Reef Base, which is now managed by Florida International University.

“If we're to look at our future, we have to look at ocean exploration and the future of ocean exploration to learn more about how we can leverage its benefits all while taking care of that life support system that we so depend...the things that make us feel like this planet is home. This project draws me because it conjures up fantasy meets reality," he said.