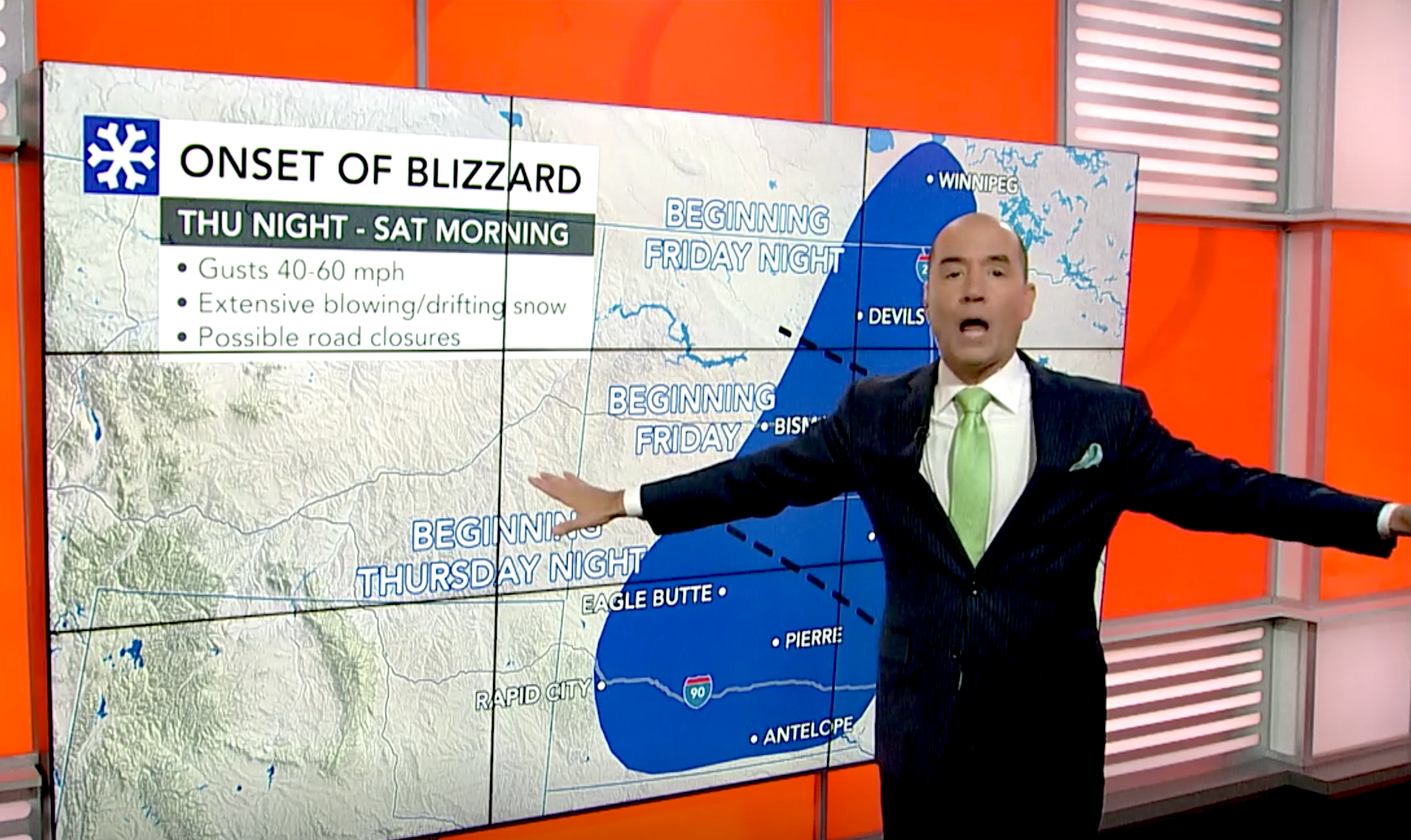 See the latest on the snowstorm that will evolve into an "all-out blizzard."

Wild temperature swings, gusty winds, heavy snow, blizzard conditions -- AccuWeather Chief Broadcast meteorologist discusses all of that and where the storm is going to erupt into 'an all-out blizzard.

The second major snowstorm in 10 days began moving across northern parts of the United States Tuesday into Wednesday, setting at least one daily snowfall record already.

By the time the storm is finished, AccuWeather forecasters say it will unload several inches to more than 2 feet of snow over the northern Rockies and will shock areas farther to the east over the northern Plains with blizzard conditions.

The storm system will bring another round of early-season accumulating snow to nearly a half a million square miles of the interior U.S., and, in some cases, the snow will fall less than 24 hours after some place saw temperatures hover in the 50s, 60s, 70s, and 80s F.

The massive size and intensity of this snowstorm is unheard of for October, according to AccuWeather meteorologists.

Commuters in the Denver metro area will experience quite a shock on Thursday morning. Following temperatures that rose near 80 on Tuesday and likely will soar above 80 on Wednesday afternoon, Denver will then be blasted with snow and frigid temperatures that plunge into the teens by Wednesday night into Thursday.

Early Wednesday morning, the bulk of the snow was falling over portions of Montana, AccuWeather radar indicated. However, snow and slippery travel was also being reported in portions of Washington state, including around Spokane where new daily snowfall record for Oct. 8 was set. Spokane International Airport recorded 3.3 inches of snow Tuesday, shattering the previous record for the day, which was a trace set in 1981.

More than 31,000 power outages were reported in the Spokane area early Wednesday morning, according to Avista, the energy company that provides power to much of the region. There were also numerous reports of tree limbs breaking from the weight of the snow. 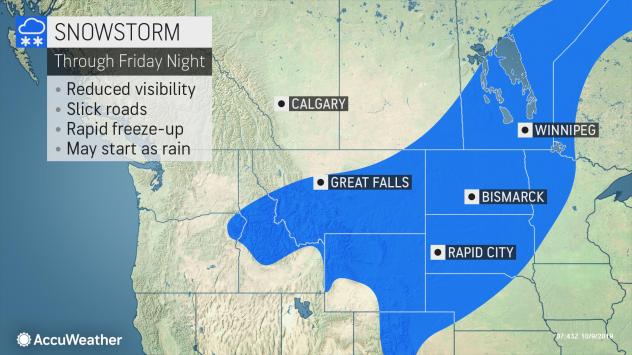 A slew of winter storm warnings and watches and freeze warnings were in effect across parts of seven states as the storm ramped up Wednesday.

Arctic air is charging southward at the same time a storm moves eastward from the Pacific Ocean over the northern Rockies and Plains.

The arrival of the Arctic air and the strengthening storm will cause weather conditions to change rapidly, whether in the mountains, over the passes or on the Plains.

As temperatures plunge to the 30s, 20s and teens, any rain that falls during the onset of the storm will change to snow from north to south and from higher elevations to lower elevations in the region.

Motorists will be at risk from getting stuck as road conditions quickly transition from wet to slushy and snow-covered.

Travel along portions of Interstate 15, I-25, I-29, I-70, I-80, I-90 and I-94 will be difficult and dangerous. It is possible that travel on portions of some of these major highways is shut down for a time into late week.

Along with major travel disruptions, substantial disruptions to school, sports and other daily activities are likely.

AccuWeather RealFeel® Temperatures will dip to 10 to 20 degrees lower than the actual temperature as gusty winds kick in during the storm.

With leaves still on the trees at intermediate and lower elevations, the clinging nature of the snow can weigh branches down and lead to sporadic power outages.

The storm will have two parts, the first of which is targeting the northern and central Rockies and High Plains. The second part will bring snow to not only the eastern and central portions of the Dakotas but western Minnesota, while it whips up blizzard conditions.

Heavy snow to fall on Montana, Idaho, Wyoming, and Colorado

Snow spread southward across much of Montana, northern Idaho and eastern Washington on Tuesday night. The snow will reach central Idaho and much of Wyoming on Wednesday. 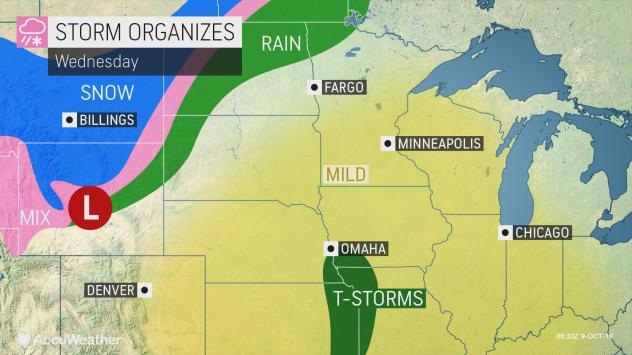 While less snow will fall from this storm when compared to the late-September storm over the northern Rockies and High Plains, accumulations are forecast to range from a few inches in parts of northern Idaho and the eastern parts of Montana and Wyoming to 1 to 2 feet over south-central Montana. 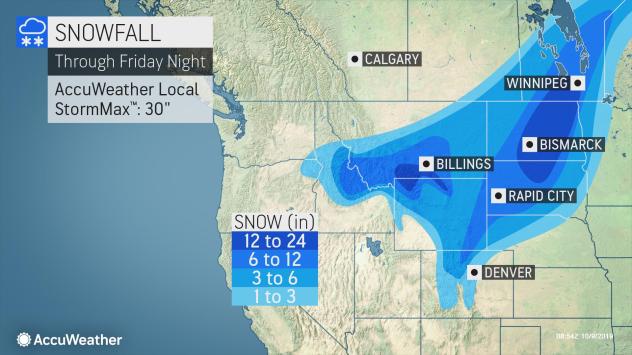 The greatest amounts of snow are likely to fall over the Elkhorn, Bighorn, Beartooth, Madison, and Absaroka ranges.

The storm from late September already brought one-quarter to one-half of the average seasonal snowfall in parts of the northern Rockies with the official start of winter still a couple of months away.

For example, Cut Bank, Montana, was blanketed by 18 inches of snow from the late-September storm alone and has an average seasonal snowfall of 34 inches.

The midweek storm will significantly add to the totals for the winter of 2019-2020. 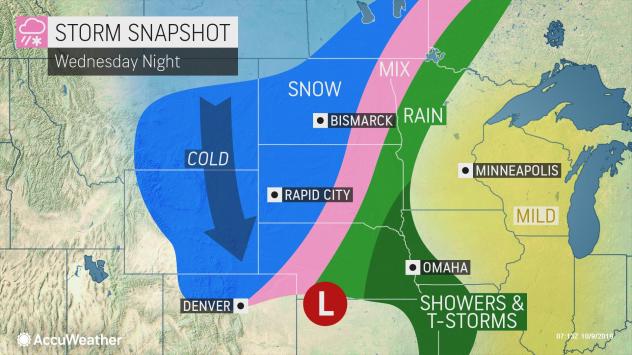 For the Denver area, in addition to the dramatic temperature swing, this storm will bring the Mile High City its first snowfall of the season. Temperatures at the start of the day in Denver on Thursday are projected to be in the lower 20s with snow of varying intensity. 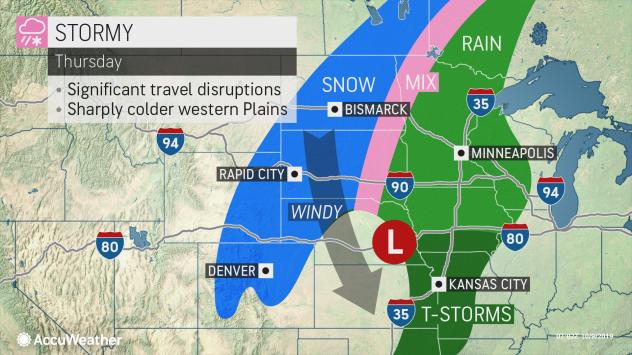 Rain will mix with and change to snow from west to east from the central Dakotas to western Minnesota during Thursday to Thursday night.

However, the heaviest snow will thump in this area as the storm intensifies late Friday into Saturday. 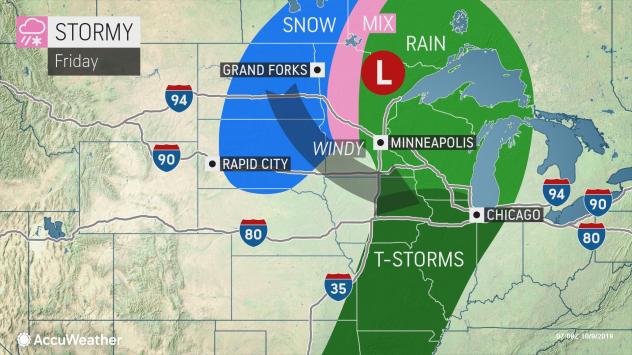 In portions of the northern Plains, the visibility is likely to dip below one-quarter of a mile with frequent winds topping at 40 mph, which is the criteria for blizzard conditions. 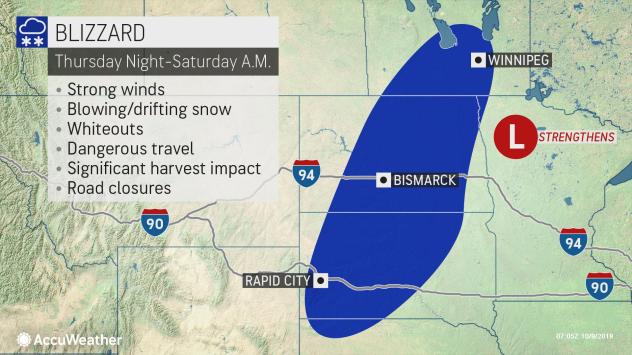 Substantial blowing and drifting of snow is in store at the height of the storm Friday and in its immediate wake during part of this weekend. Mountainous drifts are likely which can close secondary roads.

The amount of snow and cold during and after the storm could have major negative impact on the fall harvest on an area where spring planting was delayed and the growing season was substantially shortened. 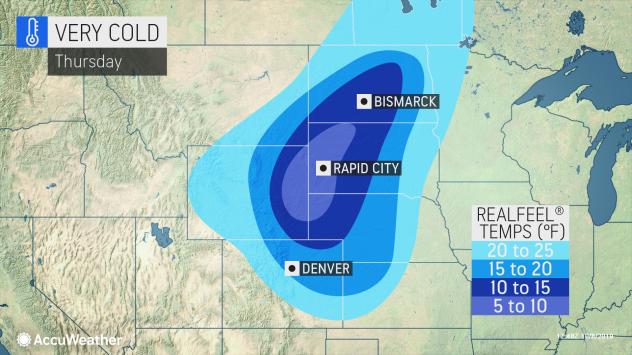 The storm is forecast to bring a few inches of snow to northwestern Nebraska and western Minnesota.

In the wake of the storm, record low temperatures can occur over portions of the North Central states late this week and this weekend.

Life-saving items to keep in your car in case a winter emergency happens 5 ways to prepare your car for winter Blizzards: The fiercest of winter’s fury defined

Download the free AccuWeather app to see when snow could impact your area. Keep checking back for updates on AccuWeather.com and stay tuned to the AccuWeather Network on DirecTV, Frontier and Verizon Fios.