Tropical Storm Dorian moved over Puerto Rico Wednesday as government officials continued to assure island residents that they are prepared.

After impacting the Lesser Antilles on Tuesday, Dorian began to unleash heavy rain and strong winds across Puerto Rico and the U.S. and British Virgin Islands on Wednesday.

The storm strengthened into a Category 1 hurricane shortly before 2 p.m. EDT.

As of Wednesday afternoon, Dorian's maximum sustained winds were 75 mph as it tracked northwest at 13 mph near the island of St. Thomas. Hurricane-force winds extend outward about 20 miles from the center of the storm while tropical-storm-force winds extend outward up to 80 miles. Additional strengthening is likely in the coming days as it pulls away from the Caribbean.

Dorian's path shifted and will take it over Puerto Rico, rather than further east over Hispaniola, before traveling northwestward through the Bahamas with an eventual strike on the Florida Peninsula as a hurricane sometime on Monday morning. As a result, the National Hurricane Center has issued a number of watches and warnings. Puerto Rico remained under a hurricane watch early Wednesday, and a hurricane warning was in effect for the U.S. and British Virgin Islands.

All interests in Puerto Rico, the Bahamas, Florida and the rest of the Southeast and Gulf coasts should continue to closely monitor the progression of Dorian, which delivered strong winds and heavy rain during its passage through the islands of Martinique, Barbados and St. Lucia.

At the very least, a swath of building seas, rough surf, heavy rain and gusty winds will spread northwestward along the path of the tropical cyclone. 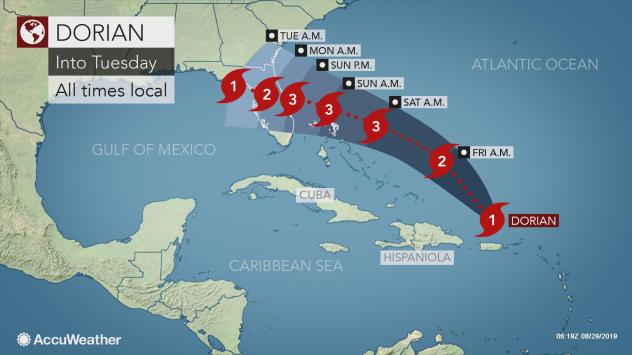 Fluctuation in strength is likely with Dorian's intensity ranging from a moderate tropical storm to perhaps a Category 1 hurricane or stronger.

A large high pressure area to the north of the Caribbean is currently steering Dorian on a northwest course.

Dorian's northwest path may only last for a two- to four-day stretch as it remains along the western periphery of the high and within a weakness in the steering flow caused by Tropical Depression Erin. 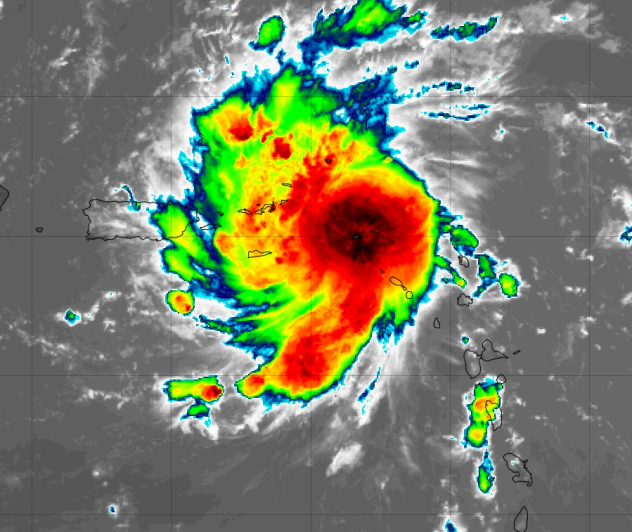 The above infrared image shows Dorian moving through the northeastern Caribbean on Wednesday morning. (Image/GOES16)

Impacts from Dorian on Puerto Rico will be dramatically less than the magnitude the island felt from Major Hurricane Maria in 2017.

Still, officials in Puerto Rico are not taking the storm lightly. Gov. Wanda Vázquez Garced said on Twitter on Monday that she issued a state of emergency declaration for the island. About 360 shelters, which hold a capacity of 48,500 people, have been opened while 24,000 cots were distributed.

On Tuesday, President Donald Trump approved an emergency declaration for Puerto Rico ahead of Dorian's arrival.

And residents aren't taking Dorian lightly either. Supermarket shelves in Cabo Rojo emptied out on Monday from residents there stocking up on water, food and generators, according to Reuters, as people braced for the storm's arrival. 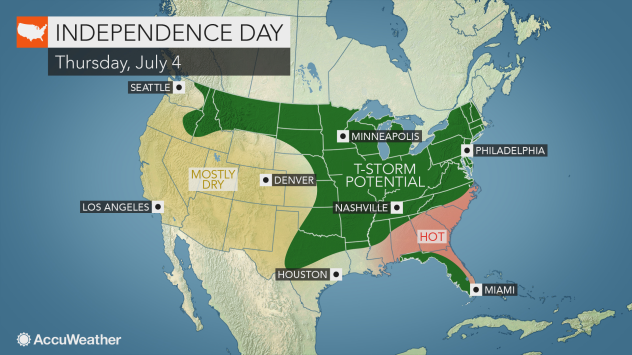 The center of Dorian is forecast to pass close to or over the U.S. Virgin Islands and eastern Puerto Rico.

Rainfall of 4-8 inches and wind gusts of 60-80 mph are forecast over Puerto Rico. Locally higher amounts of rain can occur over the mountains.

The combination of steep terrain and heavy rainfall will lead to incidents of flash flooding and mudslides, regardless of prior drought conditions over Puerto Rico. Locally gusty winds can trigger sporadic power outages.

On AccuWeather's RealImpact™ Scale For Hurricanes, Dorian is forecast to be a 1 on its travels through the Caribbean, the Bahamas and eventually Florida.

In comparison to the Saffir-Simpson scale, which has been used by meteorologists for decades and classifies storms by wind speed only, the AccuWeather RealImpact™ Scale for hurricanes is based on a broad range of important factors. The scale covers not only wind speed, but flooding rain, storm surge and economic damage and loss. 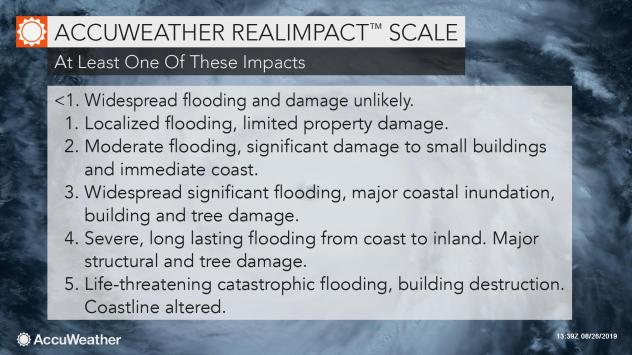 "At present, Dorian is a small tropical cyclone, which will spare large areas from feeling its worst impacts," according to AccuWeather Meteorologist Reneé Duff.

However, small storms can fluctuate in strength and potentially grow in size over the course of their lifespan. Dorian will be monitored closely for changes in strength. 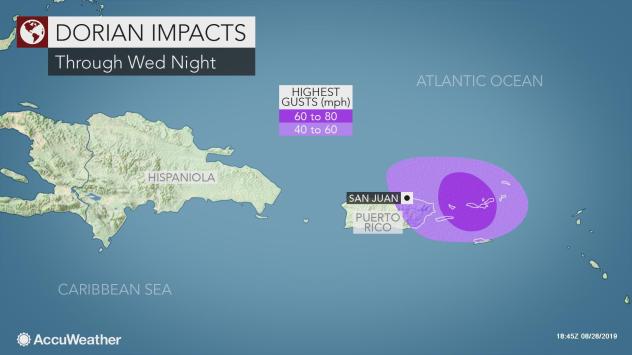 After pulling away from the Caribbean, Dorian will set its sights on the northern Bahamas and the southeastern U.S. coast.

Strengthening is expected into the weekend as Dorian moves over the warm, open waters of the Atlantic, however the exact track is not set in stone. 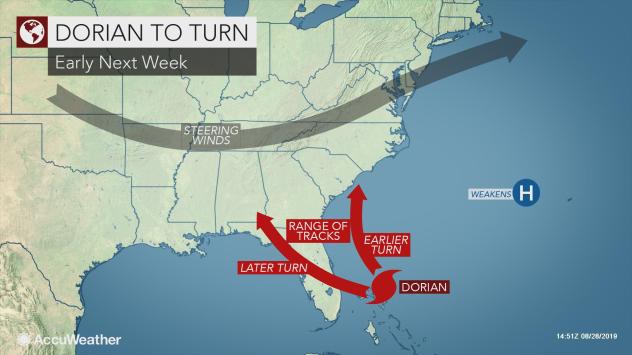 "Because of the wide range of possibilities, the wind, surge and rainfall impacts expected from Dorian over the northern Bahamas and Florida are highly uncertain at this point," said AccuWeather Hurricane Expert Dan Kottlowski.

Is there a way to save more lives when deadly hurricanes strike? Neighbors helping neighbors: How getting to know the people next door can save you during a natural disaster The worst isn’t over: Common ways people are often killed during a major storm’s aftermath Erin to bypass eastern US, strike Canada with rain, gusty winds by late week

Dorian's impact on the Windward Islands

"Dorian impacted the Windward Islands with strong gusty winds and occasional heavy rainfall, mostly impacting the islands of Martinique, Barbados and St. Lucia," according to Kottlowski.

The storm was also blamed for numerous power outages in Barbados.

Rainfall amounts of over 2 inches occurred over Martinique and a peak wind gust of 55 mph was reported from the Barbados airport during Monday night.

Conditions around these islands will substantially improve on Wednesday.