The state is hoping to cut energy use in new homes by more than 50 percent, according to a press release from the energy commission.

The building energy efficiency standards will reduce greenhouse gas emissions by 700,000 metric tons over three years. It would be equivalent to taking 115,000 fossil fuel cars off the road, according to the Energy Commission.

The initiative is the first in the nation to mandate solar panels for new homes. 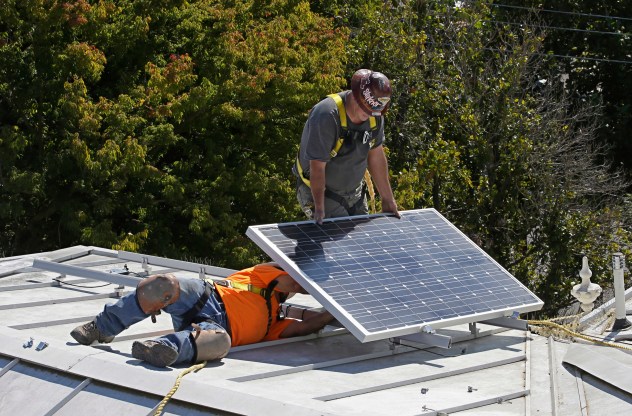 A solar panel is installed on the roof of the Old Governor's Mansion State Historic Park in Sacramento, CA in October 2015. The California Energy Commission will take up a proposal on May 9, 2018 , to require solar panels on new residential homes and low-rise apartment buildings up to three starting in 2020. (AP Photo/Rich Pedroncelli, File)

California’s Renewables Portfolio Standard (RPS) is one of the most ambitious renewable energy standards in the country.

The RPS program requires California’s electric utilities to have 50 percent of their retail sales derived from eligible renewable energy resources by 2030, according to CA Public Utilities Commission.

As a result of RPS, electricity produced for the grid is already much cleaner than it was 10 years ago, according to the energy commission.

California leads the nation in solar energy, as 15.56 percent of the state’s electricity comes from solar and nearly 5.5 million homes are powered by solar, according to the Solar Energy Industries Association.

”Under these new standards, buildings will perform better than ever, at the same time they contribute to a reliable grid,” Energy Commissioner Andrew McAllister said in the press release.

The standards require both solar panels and upgraded insulation, air filters and other efficiency measures.

The energy commission's new building standards are expected to raise the cost of a new home by up to $9,500. However, it will save $19,000 in energy and maintenance costs over 30 years, according to the report.

Based on a 30-year mortgage, the energy commission estimates that the standards will add about $40 to an average monthly payment for the average home but will save consumers $80 per month on heating, cooling and lighting bills.

However, concerns arise as California is in the midst of a housing crisis. It failed for years to build enough homes to keep up with population demand causing high housing costs.

The new solar policy will exacerbate the affordable housing issues in the state, which are seen as a drag on the economy and also contribute to rising social tensions.

“With home prices having risen as much as they have, I think home buyers would find it a little distasteful to be forced to pay more for solar systems that they may not want or feel like they can’t afford,” Brent Anderson, a spokesman for home-builder Meritage Homes Corp, said to Bloomberg. “Even though, in the long term, it’s the right answer.” 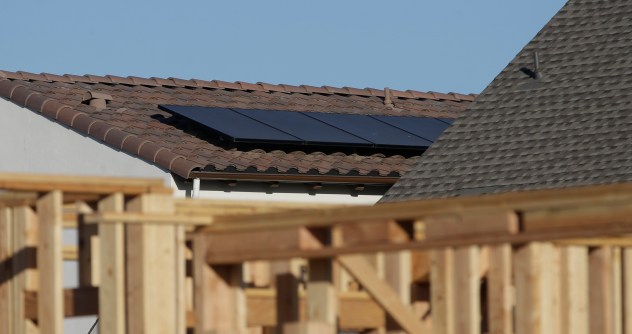 In this photo taken Monday, May 7, 2018, solar panels are seen on the rooftop on a home in a new housing project in Sacramento, Calif. (AP Photo/Rich Pedroncelli)

The overall impacts of the initiative are widely debated by experts. However, many experts agree this solar mandate may boost the solar industry.

California's move may prompt Hawaii, Arizona and other western states that have high levels of solar penetration to follow this mandate, according to Sunrun.

California generates only about 1 percent of global emissions, reducing California’s greenhouse gas emissions will not be enough to solve climate change, according to the Energy Commission “Tracking Progress” report.

However, California Gov. Jerry Brown called for unified action to combat climate change in Beijing in 2013.

“We’re in one world. We’ve got one big problem and we all have to work on it. And what’s beautiful and exciting about climate change is no one group can solve the problem—not the United States, not California, not Japan, not China—we all have to do it,” Brown said at Tsinghua University.

The initiative comes shortly after the American Lung Association’s (ALA) 2018 “State of the Air” report that found that ozone pollution worsened significantly compared to the previous annual report.

California is home to 19 of the top 25 most ozone-polluted counties in the United States.

The state suffers from poor air pollution due to a number of factors, including population size, terrain that traps pollution and a warm, sunny climate that helps form ozone and other air pollutants, according to the California Air Resources Board. 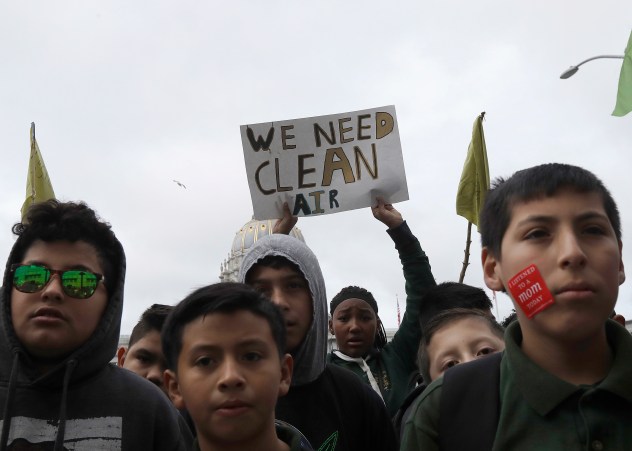 Students listen to speakers at a rally for clean energy in San Francisco, Wednesday, Feb. 28, 2018. California stands in "complete opposition" to a Trump administration plan to scrap a policy slashing climate-changing emissions from power plants, its top air official said Wednesday at a U.S. hearing in a state helping lead the fight against global warming. (AP Photo/Jeff Chiu)

On the same day the solar mandate was released, the California Environmental Protection Agency (CalEPA) also released a report highlighting the impacts of climate change on the state.

The recent solar initiative will help to further reduce harmful greenhouse gas emissions in the state.