Florida faces grim reality: Ian is deadliest hurricane in state since 1935. Get the latest.

In a visit to the Detroit Auto Show Wednesday, the president detailed plans for approval of about $900 million in federal funding for the states to build their chargers because, he said, "the future of transportation is electric."

Sept. 14 (UPI) -- President Joe Biden announced his administration is kicking off plans to expand electric vehicle charging infrastructure, by announcing funding for 35 states to build their own charging stations.

Biden traveled to Michigan, one of the states set to receive the first round of funding, on Wednesday to visit the Detroit Auto Show and detail his administration's efforts to promote electric vehicle manufacturing and reduce the need for fossil fuels.

"Y'all are going to be part of a network of 500,000 charging stations ... throughout the country installed by the [International Brotherhood of Electrical Workers]," Biden said.

During his speech, Biden detailed plans for approval of about $900 million in federal funding to build the first EV chargers across the 35 states. The money will come from the Bipartisan Infrastructure Law that was passed last year.

The Bipartisan Infrastructure Law, in fact, will provide $7.5 billion to build the national network of 500,000 EV charging stations and another $17 billion for EV battery production and clean transit and school buses.

"The future of transportation is electric," the White House said in a statement Wednesday. "The president's economic plan has generated an American electric vehicle boom that is creating new economic opportunity and tens of thousands of good-paying and union jobs across the country."

Biden said his plan will make electric vehicles accessible for everyone.

"It used to be that to buy an electric car you had to make all sorts of compromises, not today," Biden said.

He added that the "great American road trip will be fully electrified" pledging that charging stations would be available on major roadways such as I-10 and I-75.

"Charging stations will be up and easy to find as gas stations are now," he said.

Companies including Toyota, Honda, Ford, General Motors and Panasonic have announced tens of billions of dollars in investments in electric vehicles -- which is a three-fold increase in EV funding over 2020, the White House said.

"Where does it say that we can't be the manufacturing center of the world?" Biden asked. 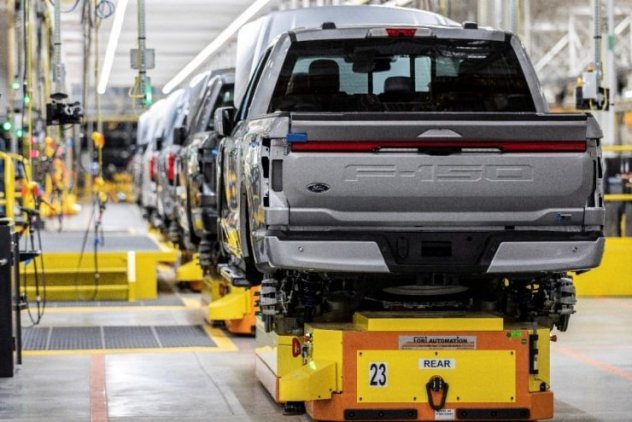 "America is confronting the climate crisis with American workers leading the way," Biden said. "It used to be to buy an electric vehicle you had to make all sorts of compromises. Not now ... It is all changing. Today if you want an electric vehicle with a long range you can buy one made in America."

Wednesday's tour is part of Biden's agenda to accelerate EV production and wean off fossil fuels, for the benefit of the environment and to become less reliant on oil imports.

The White House pointed to Biden's successes with the Bipartisan Infrastructure Law, Inflation Reduction Act and CHIPS and Science Act as factors that "have positioned the United States to lead the electric vehicle future," create more jobs and make more in America while fighting climate change.

The Inflation Reduction Act is considered by many to be one of the most significant actions to fight climate change in U.S. history. It allocates billions in funding for green energy development and aims to cut carbon emissions by 40% by the end of the 2020s.

Incidentally, the Detroit Auto Show will feature the rollout of the anticipated "farewell edition" of the Chrysler 300, a large-model sedan that runs on gasoline.

After his visit at the auto show, Biden met with union workers, CEOs and local community leaders.